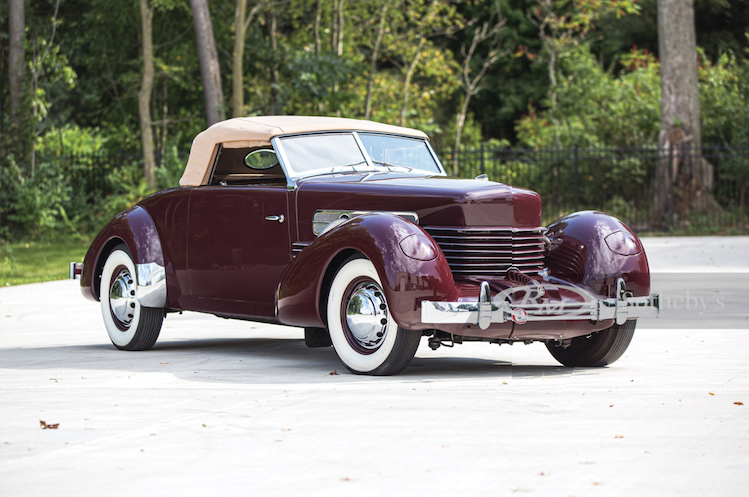 When you think of songs about cars, The Beach Boys’ “409” and “Little GTO” by Ronny and the Daytonas likely come to mind more readily than “The New Soft Shoe” by influential country-folk-rock fusion pioneer Gram Parsons. (Go ahead, take a moment to Google that.)

At its expansive and eclectic Elkhart Collection auction in late October, RM Sotheby’s sold a special example of the rare 1937 Cord 812 Sportsman convertible for $257,600. That was below the $298,000 Hagerty estimate for this model in “Good” condition, $370k in “Excellent” condition and $550,000 in “Concours” condition.

Rise of a Minor Empire

Six decades before Volkswagen Group began gathering up some of the world’s brightest luxury brands into a premium group, E. L. Cord started the template with the Auburn-Cord-Duesenberg trio. The three renowned American marques were part of Cord’s larger business empire that also included Checker Cab, engine maker Lycoming as well as airplane and ship building.

At 30 years old, Cord took over ailing carmaker Auburn in 1925 and then added Duesenberg the following year. Both marques would build icons of the period, the Duesenberg Model J/SJ and Auburn 851/852. Cord launched a car with his own name in 1929, the L-29, employing the front wheel drive system used on Harry Miller’s Indy-winning racecars.

The L-29 was a low-slung beauty, with several body styles available. But the car was overweight, underpowered and seemed overpriced ($3,000+). Just over 5,000 were made through 1932, admittedly a tough time for all luxury cars. Cord would try again in 1935.

Originally conceived as a “baby” Duesenberg, the Cord 810 was a stunner when unveiled at the 1935 New York Auto Show. Penned by Gordon Buehrig, the 810 seemed to push car design five years forward. The long, low Cord was available in sedan, coupe and convertible models. Further. thanks to front-wheel drive, all shared the striking low body profile that eliminated running boards between the curvaceous fenders.

The Cord’s “coffin nose” hood with elegant wraparound grille was a showstopper, capped with the first hidden headlights on an American car. (The driver raised or lowered the lights via hand cranks on the engine-turned aluminum dashboard.) Concealed door hinges, rear-hinged hood, steering wheel horn ring and hidden gas filler cap were all trend-setting features.

Buehrig’s masterpiece left its impact for decades. In 1951, the New York Museum of Modern Art featured the model in its “8 Automobiles” exhibition, describing it as “a solemn expression of streamlining.” Thirty years after the Cord 810 arrived, Oldsmobile designers attributed Cord inspiration for the 1966 front-wheel drive Toronado’s grille design and slotted wheels.

The Cord’s technology lived up to the promise of its design, even if some of the bugs had not been fully worked out. The naturally aspirated Lycoming-built 289 cu.-in. V8 used aluminum cylinder heads, and its 125-horsepower was impressive for the day. The engine was prone to vapor lock and overheating, however.

As on the Cord L-29, the front wheel drive used constant velocity joints that are common today. The Bendix pre-selector four-speed transmission could be troublesome, but the independent front suspension gave the Cord ride and handling qualities that were ahead of the time.

Fall of a Minor Empire

The $2,000-$3,000 price range might have been more palatable with a “Duesenberg” badge. However, it seemed reasonable enough to the 7,000 or so who placed early orders. Most would not get their cars. The first cars arrived in early 1936, and production never came close to Cord’s aim of 1,000 per month.

The 1937 versions were badged “812,” and about 40 percent got the optional 170-horsepower supercharged version of the V8. Just under 3,000 810/812 models were made, and with Cord’s auto empire in severe decline, the end came that year. E.L. Cord sold his business to Aviation Corporation. He went on to build a lucrative empire with real estate, radio and television stations in California and Nevada. He died in 1974.

A Cord Ready for Touring

The Cord 812 Sportsman convertible sold at the Elkhart Collection auction was an ACD Club certified original supercharged model. The original engine had been replaced with another correct engine at some point.

Lee Richardson, an early Imagineer for Disney, bought the Cord in 1969 and developed fixes for problem areas, which other Cord owners would adopt. These included the so-called “Richardson joint” conversion for the fault-prone front-wheel constant velocity joints.

Cord owners would adopt his fixes for some of the car’s well-known trouble areas, including the. Richardson also updated his Cord for more reliable driving with a 12-volt electrical system, electric fuel pump and electric radiator fan.

He also installed power operation for the pop-up headlights, something one could envision E.L. Cord wanting on the car. Respecting the car’s historical significance, Richardson made all modifications reversible.

Hal Bjorklund, another ACD Club member, bought the Cord in 1997 and had it refinished in the Rich Maroon factory color with a tan leather interior and tan cloth top. It’s the same exterior color as on Jay Leno’s 812 sedan, which seems to be among his favorite cars.