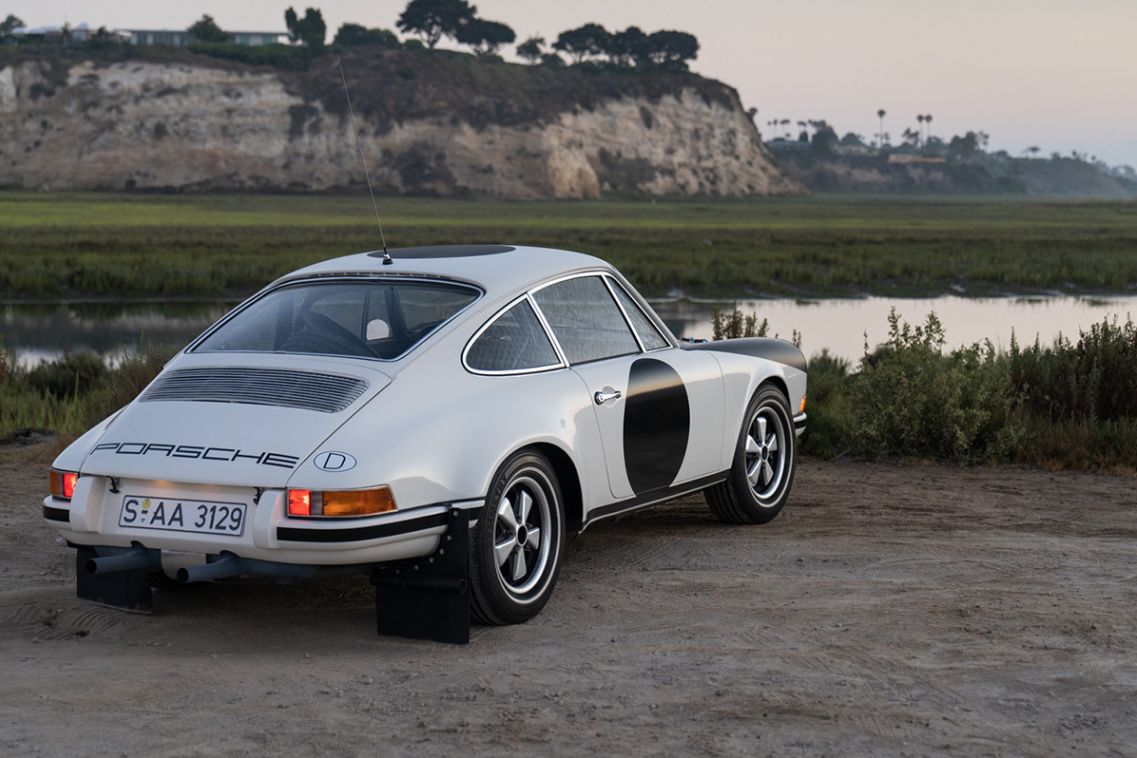 In its early years, even as it was starting to become a road racing winner, the Porsche 911 was a rally star. It established the model’s extraordinary competition versatility. Special factory-prepped 911 models won major rallies and championships in the years before that sport evolved to all-wheel drive hyper-hatches.

Following the close of bidding for Gooding & Company’s first Geared Online auction (Aug. 3-7), a very rare Porsche factory rally model, a 1971 911 ST, remained available at an asking price of $775,000. (The pre-sale estimate was $950k-$1.25m.) This 911 is one of five built for the African Safari Rally, one of the world’s most difficult races. It was one of the two practice cars and did not compete.

By the late 1960s, the Porsche 911 had become a familiar sight on road race tracks around the world. This includes FIA GT racing, SCCA B-Production and the SCCA Trans-Am series. But the 911 had first proved its competition mettle in rallying, with Vic Elford winning the 1967 European Rally Championship and Pauli Toivonen accomplishing that feat in 1968.

In the hands of rallying pros, the 911’s propensity for tail-out oversteer made drifting an natural way to carry speed through corners. Likewise, the Renault-powered Alpines had a similar talent. The plucky Porsches took first and second in the 1968 Rally Monte Carlo, repeating the same finishing order in 1971 and 1972.

Sights on the Safari

The European rallies could be arduous, especially in snow. However, Porsche had its sights on what was considered one of the world’s most challenging and dangerous rallies, the East African Safari Rally. Inaugurated in 1953, the race became known as “The Safari” in 1974. For 2020, it rejoined the World Rally Championship after an 18-year absence. (In addition, the East African Safari Classic is run as a vintage event for two-wheel drive cars built before 1986.)

Porsche decided to enter a three-car factory team in the 1971 event. This is a multi-stage rally over 4,000 miles through Kenya, Uganda and Tanzania. Moreover, there were five cars on the Porsche team, including two trainingwagens (practice cars). One of those, chassis 9111300647, is the car offered in the Gooding & Company Geared Online auction.

Rally-Ready from the Factory

Between 1970 and 1972, Porsche built about two dozen race-oriented 911 STs, featuring a twin-plug head engine. Built in Porsche’s Werk I race shop, STs were campaigned by factory drivers and privateers in a wide array of motorsports events. This includes everything from endurance races to grueling off-road rallies.

That was just for starters. To handle the Safari Rally’s difficult terrain, the factory team’s 911 STRs featured raised suspension for 10 inches of ground clearance. In addition, they feature a roll bar, two-way radio, and skid plates. Plus, two spare tires, auxiliary lighting, timing equipment, and more.

Because Sears sponsored the rally effort, the Porsche team cars used Michelin tires with the distinctive Sears white-stripe design. The hood locks, too, are Sears brand.

For an idea of just how rough the 1971 Safari Rally was on the entrants, just 32 of the 117 cars entered even finished. Two of the 911 STRs retired. The #33 car driven by Bjorn Waldegard was in an accident. The remaining factory STR, driven by Sobieslaz Zasada, who won the European Rally Championship that year. Additionally, the car took fifth in the race. For the record, Datsun’s then-new 240Z took first and second in the 1971 Safari. A Peugeot 504 sedan took third.

This 911 STR, one of four surviving 1971 Safari team cars, may have confused some in the past. Two practice cars were used, one green the other white. This was the white car, but during a restoration for an American collector in 2007, its was painted in the green livery of Waldegard’s #33 car. The restoration revealed the telltale STR features including reinforced jack points. Plus, the letters “STR” stenciled in chalk inside the rear wheel arch.

The 911 STR’s consignor, a prominent American Porsche collector, has exhibited it at Rennsport Reunion IV and the Amelia Island Concours d’Elegance. More recently, the research of ST authority Hugh Hodges confirmed that this car as the white trainingwagen from 1971. The consignor commissioned Ed Palmer of Kundensport of Oxnard, CA to repaint the ST in its historically accurate Light Ivory livery.

Although this Porsche 911 STR did not race in the East African Safari, it is nevertheless a critical piece of Porsche rally history. It is a genuine, well documented factory team car, and an exemplar of the 911’swide-ranging racing abilities.