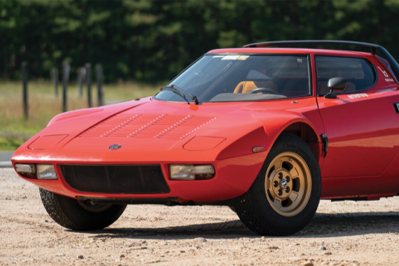 Google “Lancia Stratos revival” and a number of stories pop up, giving you an idea of the enthusiasm still burning for this 40+ year-old oddball sports car. The revivals never seem to happen, but the originals keep on generating more and more interest.

Calling the Lancia Stratos an “oddball” is meant as a term of endearment. This was a car that came out of the blue to change the sport of rallying forever. It was built specifically to conquer the World Rally Championship, which it did in 1974, 1975 and 1976. It might have garnered more if its parent company, Fiat, had not replaced the factory Stratos rally cars with Fiat 131 Abarth sedans.

A Bolt from the Blue

Lancia had enjoyed success in rallying with the Fulvia coupe, a small front-driver that won the Italian Rally Championship every year from 1965 to 1973. The little Fulvia also won the International Championship for Manufacturers, a precursor to the WRC, in 1972.

Lancia had been planning to go into Group 4 competiiton but knew more firepower would be required to battle the 170-horsepower, rear-engine Alpines. The answer appeared on the Bertone stand of the 1970 Turin Motor Show. The coachbuilder, fishing for Lancia’s business, built an outlandishly low, doorstop-shaped concept car. He called it the Lancia Stratos Zero, designed by Marcello Gandini. It was a functional prototype car, using the Fulvia’s V4 powertrain.

The Stratos Zero drew the attention of Lancia’s head of competition, Cesare Fiorio. He recognized that it was too far out to work as a purpose-built rally car but that it embodied the basic packaging and proportions he thought could work.

The following year, Lancia commissioned Bertone and Gandini to come up with something a bit more practical for rally competition. It would be built on the same 85.8-inch wheelbase as the Stratos prototype but would be powered by the Ferrari Dino’s 2.4-liter V6 and use its 5-speed transaxle.

That part of the deal met some resistance from Enzo Ferrari, who didn’t welcome the idea of a potential Dino competitor. To compete in Group 4, Lancia needed to make at least 500 examples within a 24-month period. Lancia threatened to use a Maserati engine. However, since the Ferrari Dino was ending production in 1973, an agreement to supply 500 engines was reached.

The Stratos made its racing debut a year later, as a Group 5 prototype. Victories followed in 1973 at the Tour de France and the Firestone Rally, along with second place at the Targa Florio.

A Winner Out of the Box

The Stratos was still competing as a prototype, as production had only begun in July 1972, with FIA Group 4 homologation not yet achieved. Bertone shipped completed body shells to Lancia for final assembly.

The Dino V6 as used in the Stratos was fitted with triple Weber carburetors and rated at 192 horsepower. That was more than abundant for the tiny Stratos, which stretched just 146 inches nose to tail, stood 44 inches high and weighed 2,200 pounds in Stradale (street) trim. The Stratos could blast from zero to 60 mph in about five seconds and reach 142 mph. The Group 4 rally cars were about 200 pounds lighter.

The production process resulted in just 183 cars being completed through the end of 1974. Group 4 homologation was awarded that October, however, because Bertone had built enough body shells to meet the requirement. Stratos production would continue through 1975, totaling 492 cars. By then, the Group 4 homologation requirement had been reduced to 400 cars, so all was good in the FIA’s eyes.

The factory racers, with livery featuring Alitalia sponsorship, became an iconic sight on the 1970s rally circuit. After Fiat chose to fly its rally flag on its own 131 sedan, privateers competed with the Stratos into the 1980s. A Stratos won the Monte Carlo Rally in 1979, four years after production ended.

So, what will you have … wait for a Stratos revival, or get the real thing now?