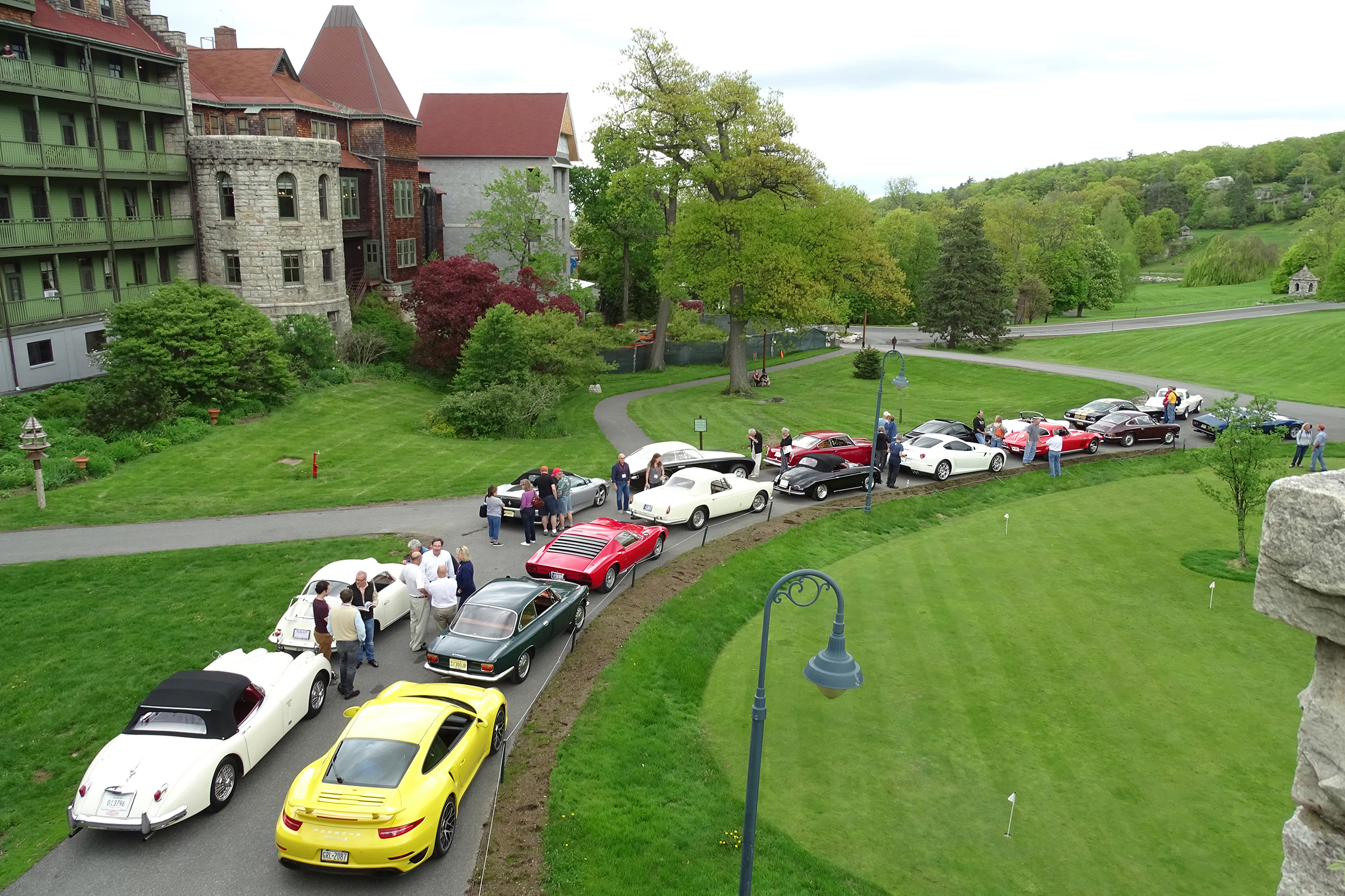 The History and Inside Story Behind “Vintage Rallies”

The Vintage Rallies story started in 1991, when author/restorer/racing driver Rich Taylor and his wife, artist/photographer/graphic designer Jean Constantine, drove a classic Lancia on the Mille Miglia Storica. The Mille Miglia is a vintage car rally around Italy, inspired by a 1000 mile race that was held each year from 1927 to 1957.

As Rich recalls, “The Mille Miglia was wonderful for its mix of vintage sports cars, beautiful scenery and enthusiastic crowds; but not so wonderful for its down-market hotels and restaurants, traffic-clogged roads and exhausting schedule. The event was also totally disorganized. There was lots of arm waving and shouting in Italian, but not much got done. We came home and said, ‘Jeez, we could do a better job than that!’”

“For decades,” explains Rich, “Jean and I had been on trips all over the world as guests of auto manufacturers that were introducing new cars. We stayed in incredible hotels, ate in Michelin-starred restaurants and drove prototype cars on fabulous roads or race tracks. The best of these over-the-top press trips were organized by our great friend Leo Levine of Mercedes-Benz. So a Mercedes-Benz press trip became our event model.”

It took two years, but they eventually formed a corporation, Vintage Rallies, Inc., convinced Mercedes-Benz to be a sponsor, and put together a mailing list of all their car-owning friends. Then, they sent out brochures and recruited a crew of “Wranglers” to work for them during the rally. Lastly, they found Official Mechanics from RPM VT to follow the group, and spent weeks planning a route around Vermont. 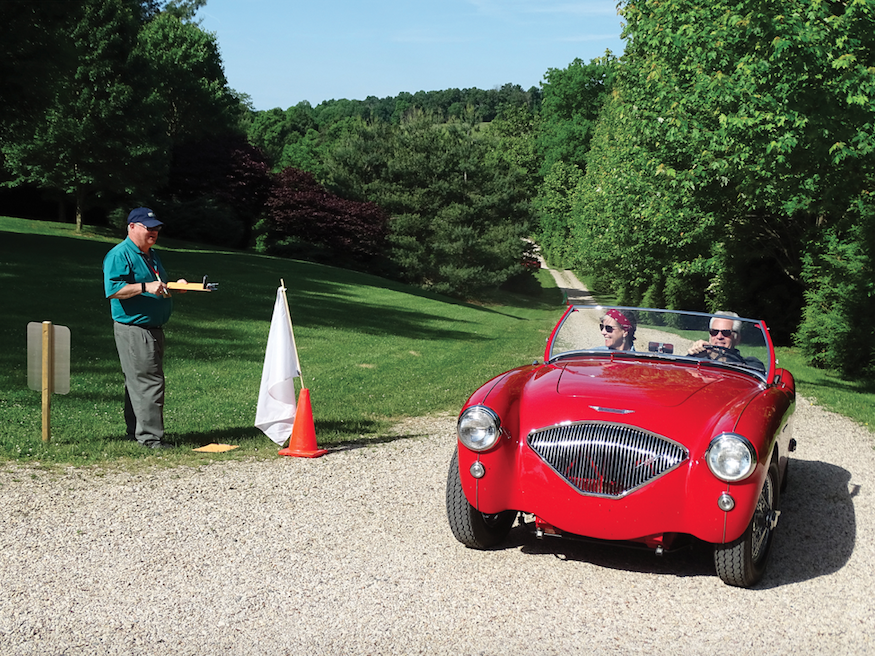 1954 Austin-Healey on the 2019 Mountain Mille. Photo Credit to Taylor-Constantine

Why Vermont? Vermont has great roads, beautiful scenery, little traffic and luxury hotels. In addition, Jean’s Scots Bell and McLam families have been prominent in Vermont for three centuries. As a result, Rich and Jean were able to meet with Governor Howard Dean, who met with him to discuss organizing a vintage sports car rally inspired by the Mille Miglia, and to make it a charity event.

Governor Dean was eager to help the children of Sergeant Gary Gaboury, a heroic State Police Officer who had driven into a gorge to save someone from drowning. Unfortunately, both of them drowned. So the very first charity Rich and Jean supported for the first Vintage Rallies event was the Gary Gaboury Fund.

This first rally was called New England 1000. “We knew that if we were to be successful, we couldn’t just drive around Vermont. Our initial idea was to drive 1000 miles around a different New England state each year. Our inside joke was that one year we’d have to do 50 laps of Rhode Island!”

The inaugural New England 1000 was in May, 1993, with 23 couples participating, who weren’t exactly sure what they’d gotten themselves into. Rich drove his 1958 Devin SS vintage race car, while other collectors showed up with everything from a 1927 Bugatti Type 35 Grand Prix racer to a Model T Ford hot-rod to a 1956 Mercedes-Benz 300 SL Gullwing, to a 1965 Aston Martin DB-6 convertible that had just won its class at Pebble Beach.

Everybody had fun, decided to do it again next year, and donated $5,000 to the Gary Gaboury Fund. Over the next few years, the New England 1000 raised hundreds of thousands of dollars to send Gary’s kids to college. The charity Rich and Jean started was then renamed the Vermont State Police Scholarship Fund, which still exists. It’s now one of literally hundreds of local charities that have been helped by Vintage Rallies over three decades.

Because of the COVID-19 virus pandemic, Rich and Jean had to postpone their 2020 New England 1000, which has been re-scheduled for May 16 through 21, 2021. That will be the 28th New England 1000. It will start and end at the Lodge at Spruce Peak near Stowe, VT. It will also include spending two nights at Le Chateau Frontenac in Vieux Quebec, and one night at Fairmont Mont-Tremblant. The 1000 mile route will twist and turn through Vermont, Quebec and upstate New York. 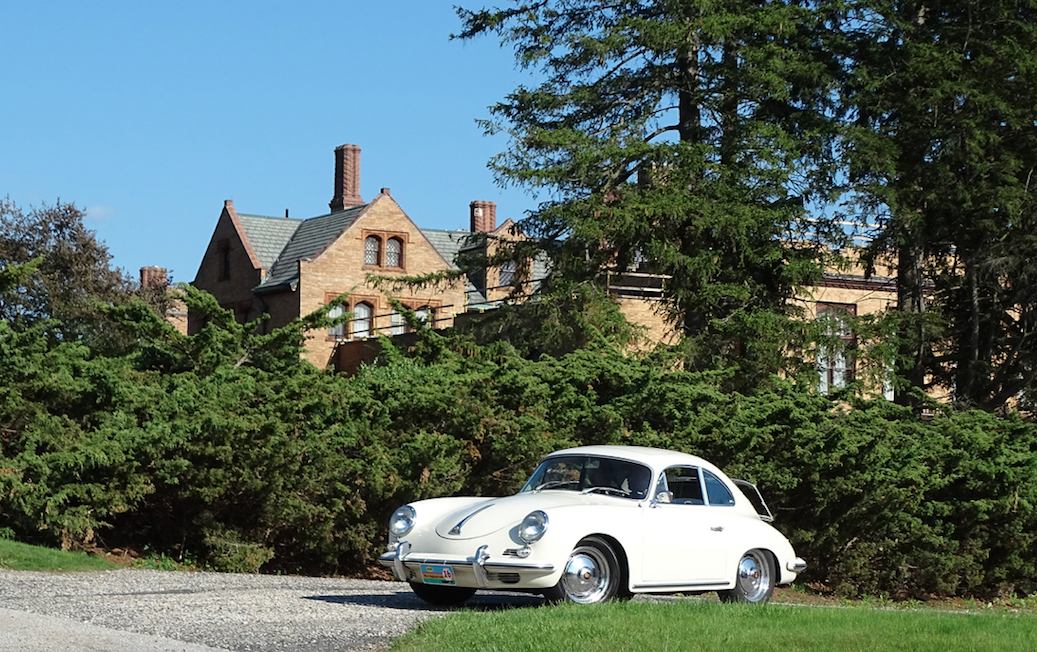 1961 Porsche 356B of Michael Levine-Julival Rocha leaving Cranwell Resort on the New  Photo Credit to Taylor-Constantine.

Stories from the Road

Like all Vintage Rallies events, the New England 1000 is limited to 50 sports cars built 1990 or earlier, or any Exotic sports car of any age. Over the years, participants have travelled from Europe, Japan, India, South America, Puerto Rico, Canada, Mexico and every state in the Union to share these adventures.

“There are so many stories,” says Rich. “One of our favorite rallyists is a medical doctor from California who only drives his cars on our East Coast events, because he doesn’t want his patients to know he can afford a garage full of Ferraris!

“One year, we had an executive from Toyota in Japan whose father had designed the rare Toyota 2000 GT back in the 1960s. The son brought with him not only a 2000 GT, but his wife, his personal assistant, two collectors from Maine with their own 2000 GT cars, and eight Japanese journalists who drove around in a minivan taking pictures of everything that moved!

“Remember, our events are just for fun. Another year, we had a Canadian vintage racer who hired John Buffum’s National Championship Pro Rally navigator Tom Grimshaw and all his rally computers to navigate for him on the New England 1000. They got beaten by a husband and wife who did their timing using the wife’s wristwatch that had no numbers on the dial!” 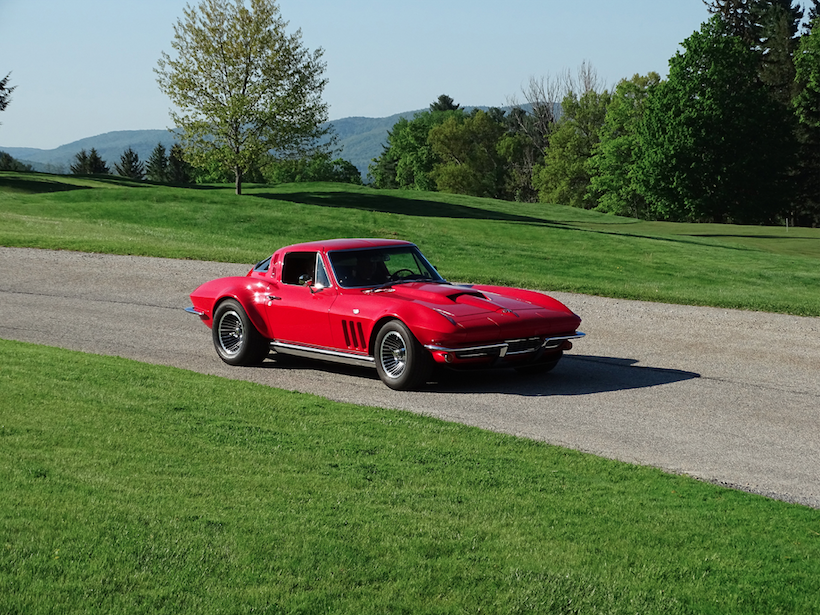 1965 Corvette Stringray with Bill Pardsy and Marcie Gemza on the New England 1000Photo Credit to Taylor-Constantine.

By the third year of New England 1000 in May, it was obvious that Vintage Rallies could expand. Spurred by a request from the president of the Ferrari Owners Club, Rich and Jean started an October rally called Forza Mille just for cars powered by V-12 engines. In 2005, this segued into Mountain Mille, which just celebrated its 15th anniversary. The 16th annual Mountain Mille is scheduled for October 4 through 9, 2020, starting and ending at billionaire Jim Justice’s posh Greenbrier Resort, staying two nights at Chetola Lodge in Blowing Rock, NC and one night at the historic 1839 Berry Hill Plantation.

Then Bill Warner, a friend of the Taylors, started Amelia Island Concours in Florida in March. Rich and Jean organized a rally called Forza Amelia that supported his event for a decade and raised huge amounts for his Amelia charities. 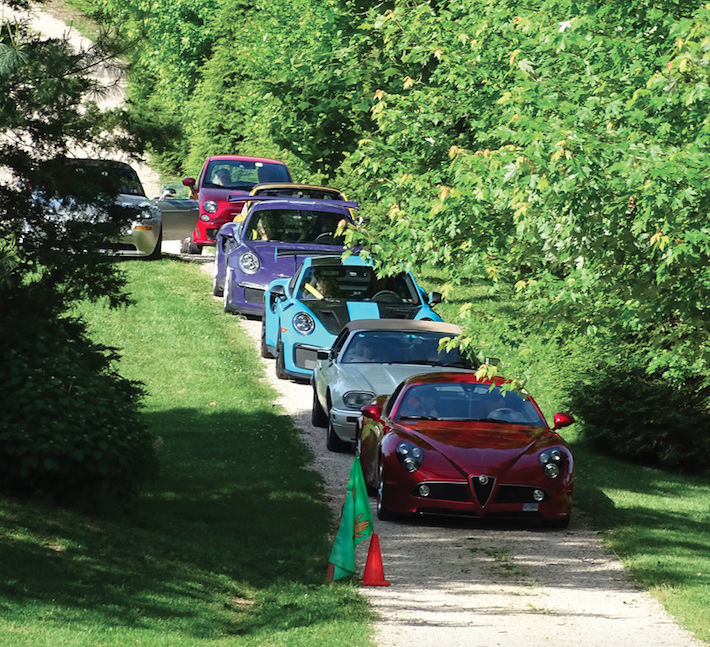 Simultaneously, in 1999, Ford Motor Company asked Rich and Jean to organize a rally in Texas sponsored by their high-performance division, Ford SVT. The Texas 1000 will celebrate its 21st Anniversary this year.  It is a 1000 mile drive around the scenic Texas Hill Country. Then, it heads along the Gulf Coast, all from November 8 through 13, 2020. It will start and end at Hyatt Regency Lost Pines Resort outside Austin. In addition, it involves a one night stay at Horseshoe Bay Resort on Lake LBJ and one night at La Cantera near San Antonio. It also features a stay at the beautiful Lighthouse Inn on the Gulf in Rockport for one night.

Like all the other Vintage Rallies, Texas 1000 has donated hundreds of thousands of dollars to local charities. Its primary charity is Service Dogs, Inc., an Austin-based group. They rescue dogs from the pound and train them as service dogs. Many of the dogs then go to help wounded veterans. As Rich likes to say, “Talk about a win-win-win!” 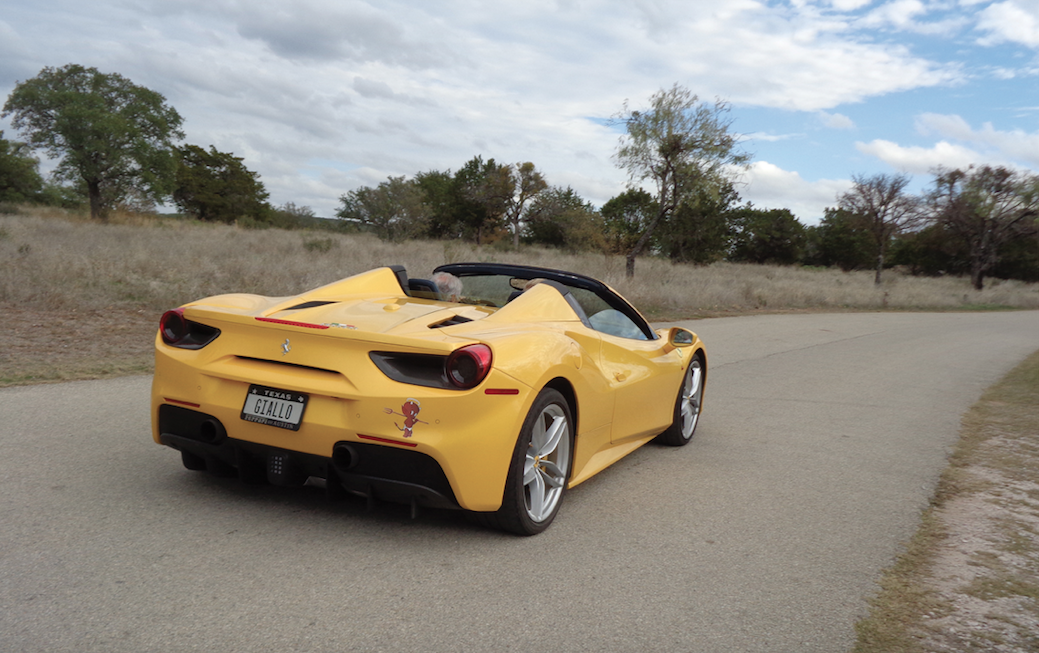 Vintage Rallies has also organized multiple events called Northwest Passage around Washington State and in the Canadian Rockies, as well as others called Southwest Passage that take the rally group from Santa Fe, New Mexico through the Colorado Rockies and back.

Including private tours for Mercedes-Benz, the Petersen Museum‘s Checkered Flag 200 group, Fairfield Concours, Concours d’Caffeine, Greenwich Concours and a group of Duesenberg owners led by Sam and Emily Mann, Rich and Jean have now organized 116 events over the past 28 years.

In the process, they’ve raised more than $2,500,000 for various charities in North America. Thousands of people have had a lot of fun on these events. More than one couple has gotten engaged during a rally. Rich even negotiated a real estate deal between two rally couples during a New England 1000. Of course, hundreds of vintage cars have been restored to bring on Vintage Rallies. 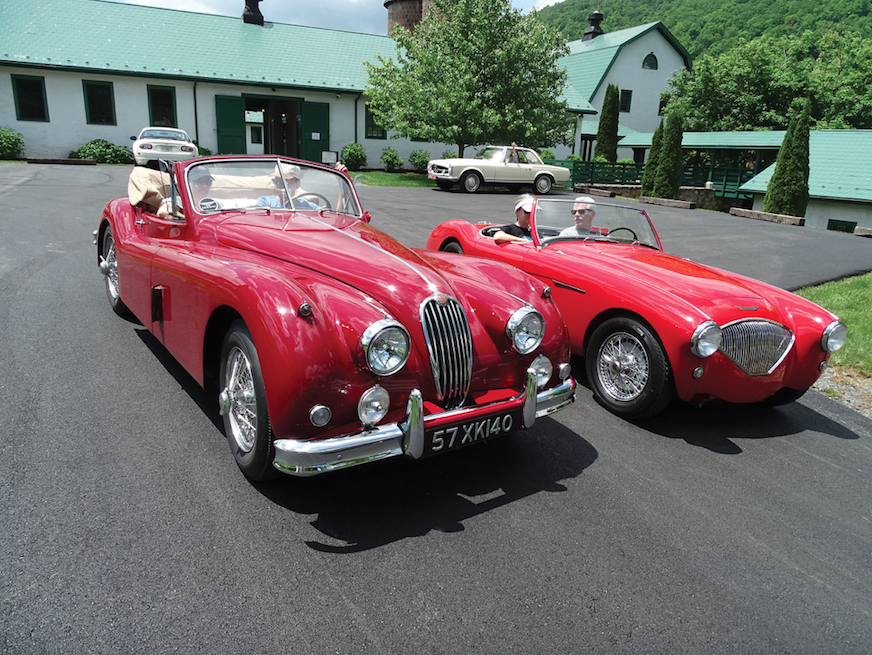 As Rich sums it up, “We like to think we’ve brought some pleasure into the world, and made people laugh. We’ve shown them a good time, and let them experience out-of-the-way places they’d never take the time to discover themselves.

“Our reward is at the end of the week, when people—especially women who were reluctantly dragged to our event by their husband or boyfriend—say ‘That’s the most fun I’ve ever had,” or ‘This is the best thing we’ve ever done with cars!’”

For more information about Vintage Rallies events, go to www.vintagerallies.com. 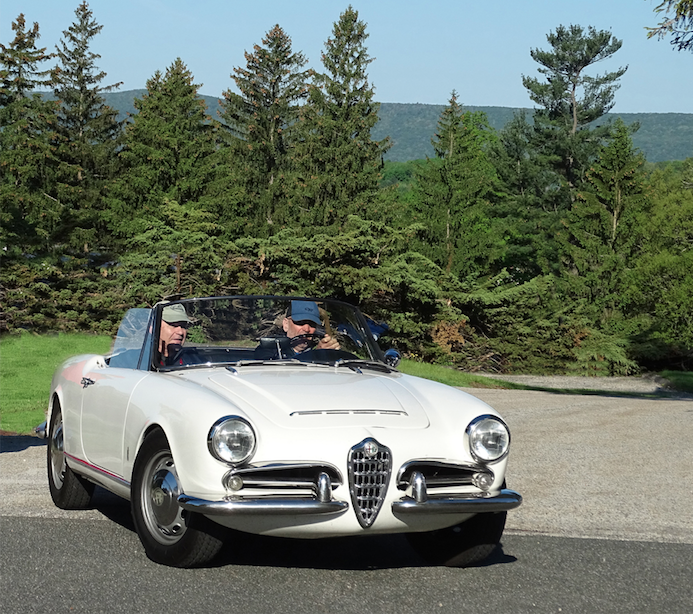 By John Paulding
Photos by Taylor-Constantine