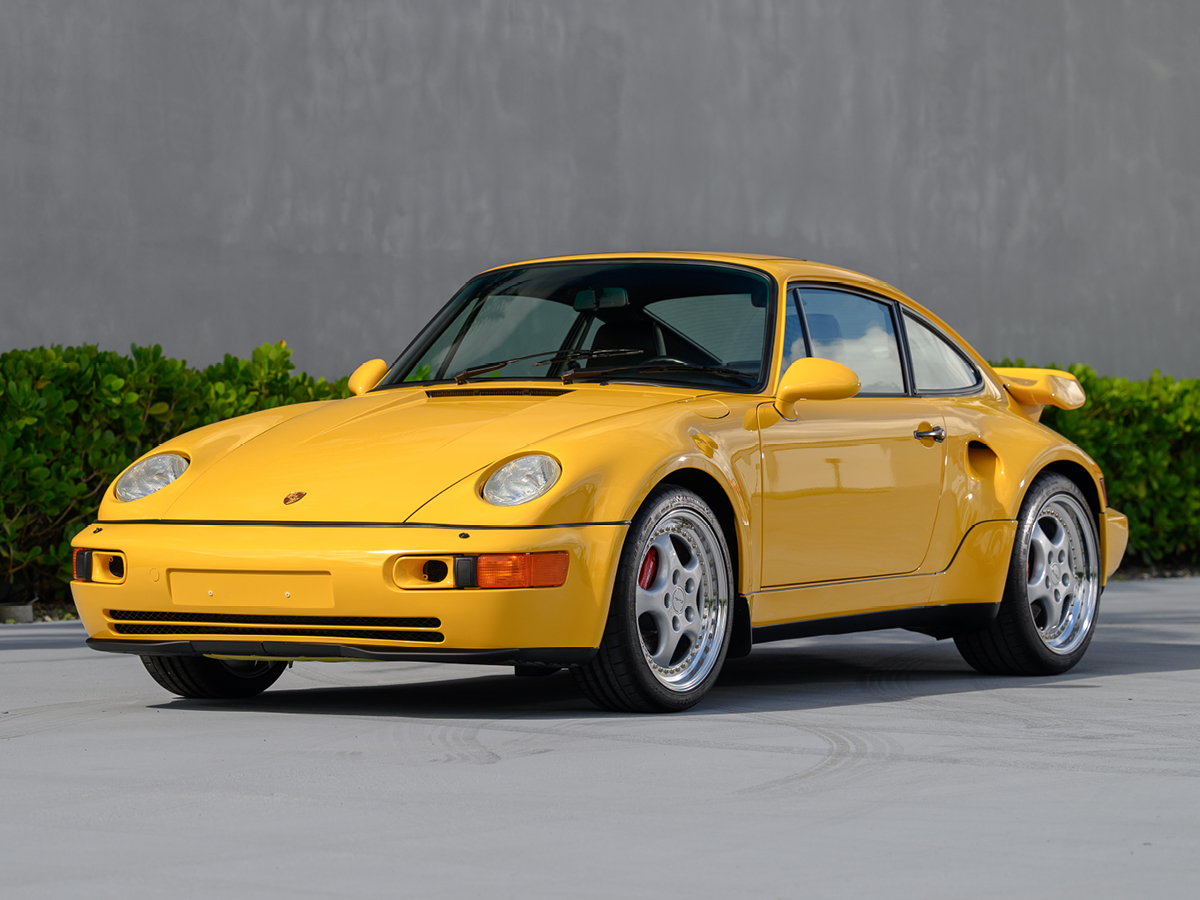 The Last and Greatest 964 Series Turbo

Many enthusiasts and collectors relish the opportunity to buy the “last” of a particular model, even knowing that its replacement is likely to be a quantifiably better vehicle in many ways. But to such buyers, “better” doesn’t always mean more desirable.

Porsche, for one, knows this scenario well, and the marque has a penchant for pleasing loyalists by making special final models. The 1994 Porsche 911 Turbo S X85 Flachbau (Flat-nose) exemplifies this trait. This model with the long, odd name marked the end of the 964-series 911 Turbo in a most memorable way.

Just 39 such cars came to the U.S., and the one offered by RM Sotheby’s at its Scottsdale auction is the only one that came painted Speed Yellow. The auction house estimates the car may bring up $800K-$1M. (The consignor, the car’s fourth owner, acquired the car from RM Sotheby’s at The Amelia Island auction in 2018.)

The end of Porsche’s 964 series 911 was a signpost on the road to an even brighter future for this legendary sports car. While its successor model, the 993, would still use air/oil cooled engines, the rest of the car was a major advance over the 964. And that was a good reason to make the last 964 special.

So, did Porsche just dream up a limited-edition new color, some new badges and throw in special wheels for good measure? No. Porsche built the best version of the 911 Turbo that it could, combining the best of the classic air/oil-cooled, single-turbo, rear-wheel-drive Turbo era with unique design and irrefutable exclusivity.

How exclusive? Porsche started by sending the final 93 911 Turbo coupes built shuttled to Porsche Exclusive and converted to “S” specifications. Of those, 76 received the flat-nose front end, though the 10 sent to Japan used the older style based on the 935 race car. The 39 sent to the U.S. were identified as “X85” models.

The other 17 mechanically identical Turbo S cars were built for the U.S. and Canada without the flat-nose front end (identified as “Package” cars). One of those sold on Bring-A-Trailer in December 2022 for $1.26M. For comparison, Porsche sent 1,500 standard 1994 Turbos to the U.S.

The sole transmission was the G50 five-speed manual, and all cars were equipped with the ZF limited-slip differential with up to 40 percent locking. Suspension was the same as for the 911 Turbo. The 18-inch “Speedline for Porsche” modular light-alloy wheels, 8-in. wide in front and 10-in. at the rear, wore 225/40R18 front and 265/35R18 rear tires – same as the standard 911 Turbo.

The most obvious change to the X85 Flat-nose was, of course, the nose. Porsche based the look on the front-engine 968 with its exposed retractable headlamps. Other X85 body features included 959-style air intakes on the rear quarter-panels, a special front air splitter, and quad exhaust tips.

The 1994 Porsche 911 Turbo X85 Flat-nose offered by RM Sotheby’s was delivered to its first owner through Champion Porsche of Pompano Beach, Florida in February 1994. The car’s third owner acquired it in March 2015 and reportedly commissioned a top-end engine rebuild, along with the complete refurbishment of the brake and suspension assemblies. The consignor (fourth owner) reports an authorized Porsche dealer performing several services.

The best part? This unique Porsche been enjoyed for nearly 29,000 miles, so for those who like to drive Porsche history and not just look at it, there’s no reason to keep it as a garage queen. They’re a blast to drive. Just ask the owner who offered an X85 on Bring-A-Trailer a few years ago showing 162,000 miles.