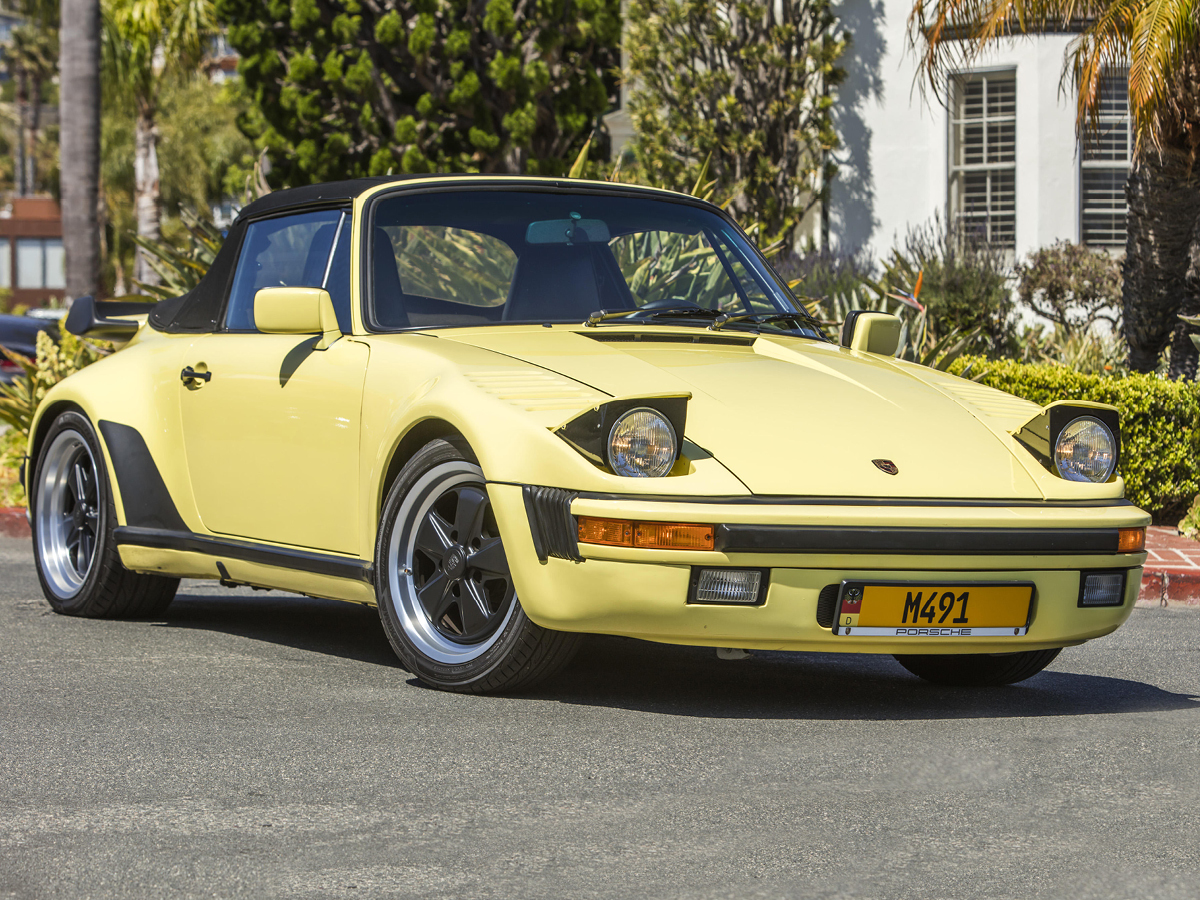 A Revered Special Edition, with a Rare Combination of Styles

Porsche 911 aficionados could talk all day about the numerous special editions the factory has issued over the decades and continues to issue in the current series. Though not among the rarest with 1,852 built from 1984-1989, option code M491, the “Turbo-Look,” is one of the most revered.

The Bonhams Quail Lodge auction in August will offer a captivating example of this special 911, and as photos show, it’s got a lot more than the M491 option going for it. This one also has the M505 “Slant Nose” front end design, believed installed for the original owner at Zipper Porsche in  Beverly Hills before taking delivery. It’s all Porsche steel, not a fiberglass knock-off, which was not uncommon to see back in the day.

Zipper Porsche was one of several high-end dealerships once owned by racer Otto Zipper, who raced and sold Ferraris and Porsches. He died in 1979, and the dealerships were later sold. Bonhams will offer this 1987 Turbo Look Carrera with the M505 bonus at no reserve. The pre-sale estimate is $80,000-$120,000.

More Than Just a “Look”

Available for the coupe or convertible, the M491 package cost up to $15,000 depending on the model year. The “Turbo Look” name given the option tends to sell the car short. Essentially, the car shared the 911 Turbo wide-body design, including its flared wheel arches, deeper wraparound front chin spoiler and the famous “whale tail” rear wing for added downforce.

More significantly for driving performance, the M491 option added the Turbo’s stiffer suspension, 16-inch alloy wheels and larger cross-drilled brakes. The 911 Turbo was not available in the U.S. from 1979-1985, so the M491 Turbo-Look package was the only way for American buyers to get these features until it returned in 1986.

The wheels were arranged in a “staggered” setup, meaning wider on the back than the front and necessitating the wider rear fenders, as on the Turbo. Do not, however, think of the Turbo- Look as a Turbo imposter. The M491 was its own car, with dynamic qualities that elevated it just enough above the standard Carrera 3.2 to make it a distinct entry on the 911 family tree. And the Carrera 3.2 was a tough act to top.

In a story told many times, there were forces within Porsche in the 1970s that wished to sunset the 911 and focus on the then-new front-engine 924 and 928. The 911 thus suffered from a lack of development until a new management direction stepped in for the 1980s. One of the first things tackled was upgrading the 911 SC, which had been around since 1978. The most significant part of the model evolution would be a 3.2-liter engine to replace the 3.0-liter version of the venerable flat-six in the SC.

The change brought much more than an additional 200cc of cylinder displacement. Porsche said the engine had 80 percent different parts from the 911 SC’s engine. Notably, the 3.2 was the first 911 engine with the electronic fuel injection and the Digital Motor Electronics computer control, a.k.a. Motronic 2. Together with the increased displacement and higher compression ratio, these changes boosted engine output to 200 horsepower, up from 172 in the 911 SC.

That was a big difference in a car weighing just 2,760 pounds, and it showed on the road. In Car and Driver’s road test, a 911 Carrera 3.2 did 0-60 in just 5.3 seconds, which was barely behind what the 911 Turbo had done before being temporarily pulled from the U.S. market. The quarter-mile flew by in 13.9 seconds at 100 mph, and top track speed was computer-limited to 149 MPH.

Auto media also praised the 911 Carrera 3.2’s improved fuel efficiency, which averaged around 20 MPG, up from about 17 MPG in the 911 SC. The Car and Driver test model happened to be equipped with the Turbo-Look package, which had no effect on acceleration but of course looked great. All-in-all, the Carrera 3.2 was a slam-dunk winner, made even better by 911 Turbo chassis hardware.

This 1987 911 Carrera Turbo M491 offered by Bonhams was one of 305 built for the year. Clearly, the original owner wanted even more racecar flavor and got it with the Slant Nose conversion. A limited option on the 911 Turbo, the Slant Nose drew its aerodynamic style from the 911 Turbo-based 935 racecar that won Le Mans in 1979, Sebring six times and the Daytona 24-hours for six years in a row, among others.

As a 1987 Carrera convertible, this car is equipped with the desirable G50 transaxle and power top that were new to the model that year. The original buyer chose the special-order Summer Yellow exterior color.

If you believe that having the Slant Nose conversion done on a 1987 Porsche 911 Carrera M491 by a Porsche dealership started by a noted Porsche racer adds to the car’s appeal, you’ll get no argument from us.