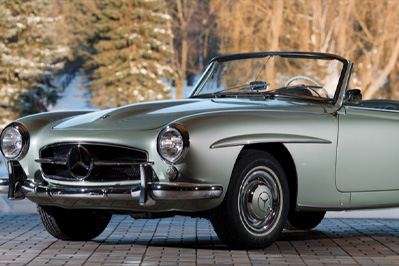 A Sports Car for Savoring the Journey.

When car-importing pioneer Max Hoffman convinced Mercedes-Benz to build a production version of the racecar that became the 300 SL Gullwing, he also pushed for a more affordable second model, which could benefit from the halo effect of the elite sports car. The resulting 190 SL echoed the 300 SL’s styling yet did not dilute the Gullwing’s impact.

The dual-SL strategy was genius. It was perfect for those who felt tempted by the Gullwing’s design but unable to afford its $7,300 price. They could buy something with a similar look for a little more than half that. Or, it made the perfect addition to the garage for those already buying a 300 SL!

For a long time, many might have overlooked the Mercedes 190SL for the successor 230/250/280 SL models. Which makes sense, they were objectively better performers and better all-around cars. The 190SL’s specs were fairly underwhelming when new. In addition, it was not a car that would necessarily entice someone looking at a Porsche 356 Speedster, for example.

With 105 horsepower from a 1.9-liter four-cylinder engine, the 190 SL’s power was on par with small sports cars of the day. But the little Benz weighed 2,600 pounds. That was about 800 pounds heavier more than a Porsche Speedster, and 600 more than an Alfa Romeo Giulietta Spider.

Chalk up the weight to sturdy Mercedes unit-body construction. Suspension was by coil springs all around, with swing-axle independent rear suspension. Zero to 60 took about 13 seconds, and top speed was just over 100 mph. You didn’t buy a 190 SL to chase Jaguars, but rather to enjoy the sights that speeding Jag drivers might pass in a blur.

To say the Mercedes 190 SL was more sporting luxury tourer than pure sports car is not to damn with faint praise. In an era when sports cars tended to have rudimentary comforts and leaky convertible tops, the 190 SL offered a higher caliber of driving quality. It was more comfortably snug than many contemporaries in non-sunny weather, and a matching hardtop made it even more so. The well-appointed 190 SL was tailor-made for daily commuting or longer drives. Trunk space was good for a small roadster, and fitted luggage was available, though rare.

Interestingly, the prototype 190 SL shown alongside the 300 SL at the 1954 New York Auto Show was decked out with racing-inspired cues, including a racing windshield, cut down doors and a hood scoop. Three years later, at the 1957 Bahamas Speed Weeks, John Moore, won the Islander Race in his 190 SL, coming in ahead of a Jag, Austin-Healey and Triumph TR-2. It seems unlikely, however, that Moore’s obscure victory had any lasting impact on the collector market for the 190 SL.

The 1956 Mercedes 190 SL to be offered by RM Sotheby’s at Amelia Island looks stunning in silver. The matching hardtop is included, as are manuals and tools. The car was owned by one family in California for most of its life and received a comprehensive concours restoration in the Netherlands before the current owner acquired it several years ago. It has been has been driven only about 100 miles since. Full photo documentation of the restoration comes with the car.

In a time when pavement-rippling acceleration seems to have become the defacto criteria by which sports cars are judged, the Mercedes 190 SL is a brilliant reminder that the definition was once far broader.