Automobile connoisseurs had no shortage of choices among elite marques and models in the 1920s and 1930s, but Bugatti stood apart. No other automaker in that class offered the array of luxury touring sedans, sports cars, racecars, and what we’d today call GT cars.

Among the most memorable classic Bugattis was the Type 57, with the quartet of Type 57SC Atlantic models at the pinnacle. Its sibling, the Type 57 Atalante, is slightly less rare, and with factory coachwork nearly as daring.

Gooding & Company is offering one of the 17 Atalantes built at its Pebble Beach auction, with a pre-sale estimate of $1.75-$2.25m. Compared to some modern Bugatti offerings, that’s a bargain. 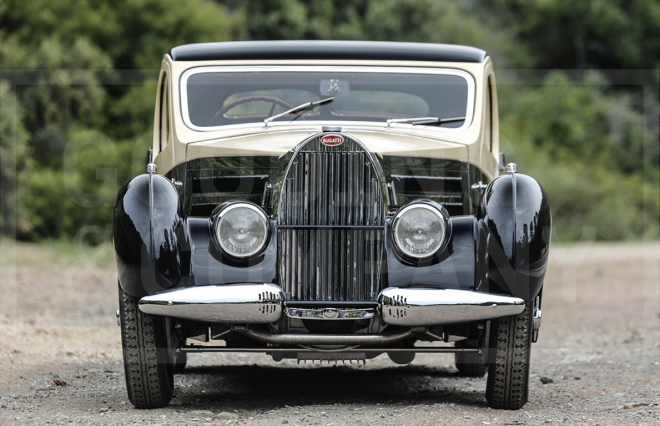 Suitable for a Greek Goddess

Bugatti introduced the Type 57 at the Paris motor show in October 1933 and would go on to build about 700 in various body types. A 3.2-liter straight-eight DOHC engine, which formed the basis for the Type 59 racecar’s engine, gave 125 horsepower, enough for Jean Bugatti to drive the 270 miles from the factory in Molsheim to Paris in less than 3-1/2 hours.

There was more potential, though. To create the later Type 57S (for “surbaissé”, meaning lowered), Bugatti put the rear axle through the frame rather than under it, and used a dry-sump lubrication system (remote oil tank) to lower the engine. In addition, higher compression yielded more power. The “S” also meant a shorter wheelbase, which was ideal for the two-seat Atalante and Atlantic coupes.

The design, by the artful hand of Jean Bugatti, is a stunner. The name was derived from a Greek mythology heroine, Atalanta, and particularly in the two-tone paint scheme seen on the Gooding car, the Atlalante looks fit for such a figure to drive! 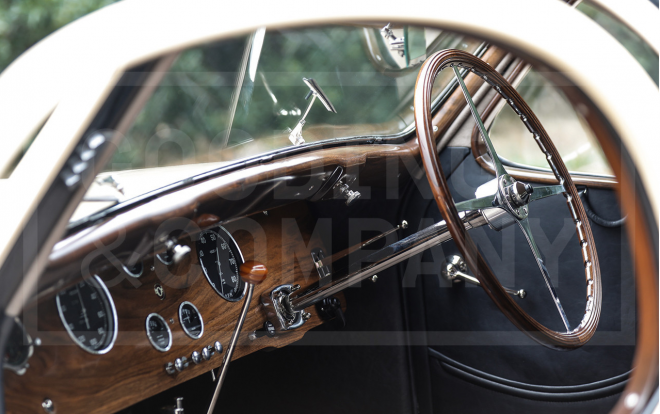 A True GT Before the “GT” was Coined

For those who wanted more power (who wouldn’t?), the SC version – “C” indicating a compressor, a.k.a. supercharger – delivered 160 horsepower. Just a handful were equipped that way as new, but most of the “S” owners had their cars refitted at the factory. In the Bugatti tradition, the engine was a visual masterpiece, as well.

The powerful and smooth straight-eight, four-speed transmission and superb road handling made the Type 57S an ultimate driving machine for the era. Yet, the Atalante also offered long-distance comfort for sustained high speeds in the grand touring tradition later exemplified by Ferrari’s berlinettas.

A Tale of Two Bugattis

You may have heard about the Atalante found in an English barn after 50 years of storage and then sold for $4.4 million a few years back. That’s a pretty difficult story to top, but the car offered by Gooding is no slouch in the history department. It is essentially a blend of two cars, chassis no. 57386 with the body from no. 57386.

The 57386 car was sold to a buyer in northern France in 1936 and was traded back to the factory in 1949 by a subsequent owner. Obsessive Bugatti collector and industrial malfeasant Fritz Schlumpf bought 57386 in 1961 during a historic Bugatti buying spree with his brother, Hans.

The Swiss-born Schlumpf brothers had assembled the world’s largest Bugatti collection in secrecy in one of their French textile factories. When their angry, unpaid workers discovered the treasure in a spectacular museum setting in the 1970s, the jig was up. The debt-soaked Schlumpfs absconded to Switzerland, and French government seized the collection, which became Musée National de l’Automobile (National Automobile Museum). 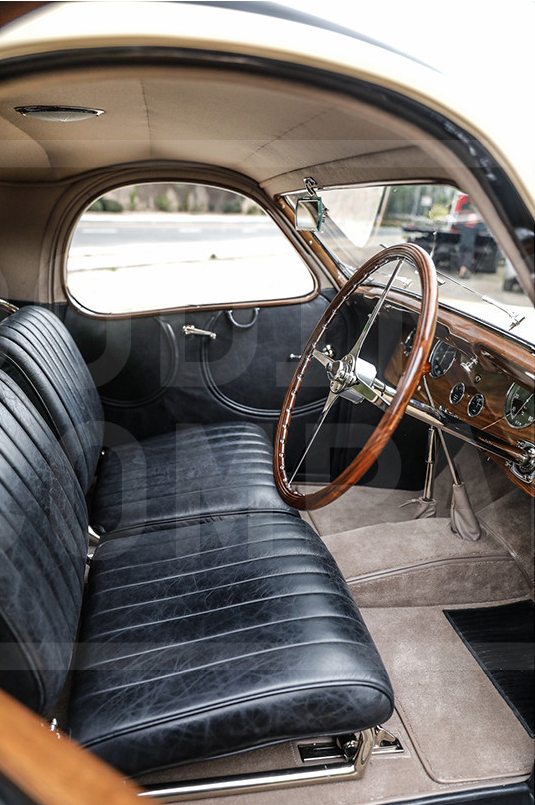 Schlumpf’s acquisitions included 30 Bugattis in a package deal for $85,000 from American collector John Shakespeare in 1964. Among the group was an Atalante, chassis no. 57686, which had some damage. The body, one of six made in aluminum, was still in good condition, though. (https://www.hagerty.com/articles-videos/articles/2019/05/24/used-car-deal-of-the-century-included-30-bugattis#)

It turned out that 57686 was a supercharged car from the factory and may have been displayed at the 1938 Berlin auto show. Once in the Schlumpf collection, 57686’s body was removed and spent many years in storage alongside the 57386 chassis.

In the 1990s, the museum traded the body and chassis to Bugatti authority Uwe Hucke in exchange for a trove of Bugatti factory documentation. Hucke joined body and chassis, the latter confirmed to retain its original engine, gearbox, differential, and front and rear axles, along with original chassis and patent plates.

In 2003, the reassembled Atalante to Swiss collector Guy Huet, who had it refinished in its current black and cream color scheme. The Bug then went to a significant East Coast collection in 2014 and was brought up to 57SC specifications with a Brineton Engineering supercharger and intake. The Atalante was treated to new paint and an entirely re-trimmed interior, including a matching fitted luggage set behind the seats.

The well-traveled Bugatti then crossed the Atlantic once again for another collector. Now, this extraordinary Type 57 Atalante is available to you.