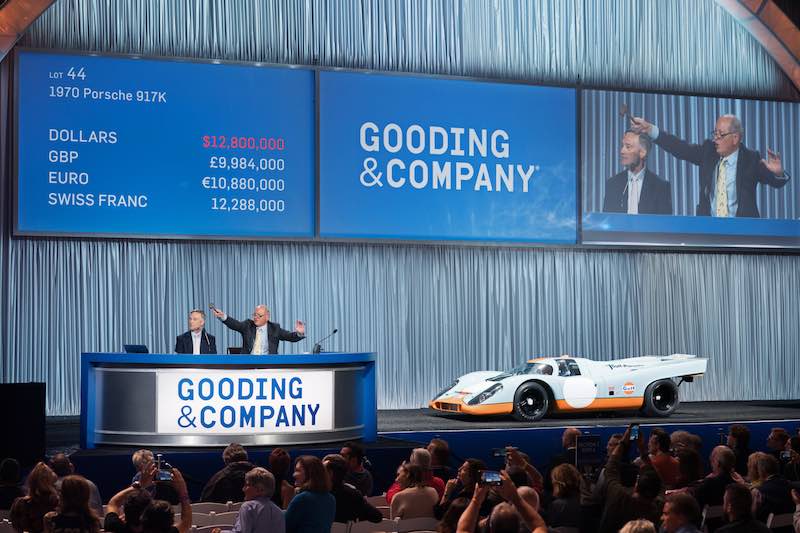 In addition to serving as an ideal winter destination with its dry climate and mild January temperatures, Scottsdale, Arizona also plays host to Gooding and Company’s annual Scottsdale Auctions. Held adjacent to the Scottsdale Fashion Square Mall at the corner of North Scottsdale Road and East Highland Avenue, Gooding & Company’s Scottsdale Auctions will continue their tradition of offering a veritable trip through automotive history with 170 vehicles offered on Friday January 17th and Saturday January 18th this year. Unlike the other top auction venues in America, the Scottsdale auctions are focused on buying and selling without the shows and concours events found elsewhere. The Scottsdale auctions also serve as a bellwether event, setting market expectations for the remainder of the year.

The Premier Financial Services team of dyed-in-the-wool car enthusiasts and leasing professionals will be watching this celebrated auction closely. Here is a selection of their favorite offerings crossing the auction stage with Gooding & Company.

Lot 031, a 1969 Lamborghini Miura P400 S, is the pick of Ross Dressel, our Midwest Region Sales Manager and Juan Garcia, Premier’s West Coast Region Sales Manager. One of only 140 examples produced, the P400 S was the first updated development of the stunning Miura, which debuted in bare-chassis form at Turin in November 1965. First shown with its stunning bodywork in March 1966 at Geneva, the mid-engine Miura emerged as the world’s first “Supercar”.

Comprehensive improvements enhanced the overall experienced offered by the Miura. This includes power increase to 370 hp with enhanced grip via speed-rated Pirelli tires. Plus, a host of welcome comfort and convenience upgrades.  A low-mileage, European-delivered example, this Miura was displayed at the 1996 Pebble Beach Concours d’Elegance® and fastidiously maintained by marque experts for serious collectors on the West Coast, with provenance including 33 years’ sole ownership from 1973 to 2006. In short, a “blue chip” collectible in a rare and highly desirable specification.

The pick of Premier’s Northeast Sales Manager, Keith Neelans, this 1956 Porsche 356 A Speedster is a wonderful example of Porsche’s bare-bones, yet glamorous and avant-garde Speedster. Sold new to Stephan Graf von Kesselstadt, a German count, it was also registered in Italy during 1957. This information is according to an ACI (Automobile Club d’Italia) decal still affixed to the rearview mirror. North Dakota native Richard Starke, a young USAF pilot, purchased the Speedster while stationed in West Germany in 1959. Starke eventually rose to the rank of major. He served as an RF-4C pilot in Southeast Asia where he earned the Silver Star for bravery. This medal was earned on a particularly dangerous aerial reconnaissance mission. Following his stint in Germany, Starke shipped the Speedster to the United States.

The Speedster accompanied him at his subsequent postings. Remaining with him until it was purchased from his family by the consignor. Accompanied by a copy of its factory Kardex production record, this wonderful Speedster also retains its original engine. This offers the opportunity to preserve it or commission a concours-quality restoration.

Lot 148, a 2016 McLaren 675LT was selected as the pick of the Gooding & Company Scottsdale offerings by Chris Warren our Southeast Sales Manager. Debuted at Geneva in March 2016, the McLaren 675LT was a more than worthy successor to McLaren’s F1 GTR Longtail. The Longtail was the ultimate evolution of the 1995 Le Mans-winning F1 GTR. This vehcile delivers impressive aerodynamics, exceptional downforce, and active airbrake. Plus, 666 horsepower from its twin-turbocharged V-8 engine, the 675LT exudes a decidedly track-focused character and delivers a 205-mph top speed. Offered without reserve, it is one of just 500 examples produced in all. Featuring special-order Sapphire Black paint and coming to auction with less than 225 miles, this original US-delivery car is highly optioned and benefits from single ownership since new.

The collective pick among the Premier Financial Services staff is this 1981 BMW M1, crossing the auction block on Friday January 17thas Lot 54. Inspired by the Turbo show car of the early 1970s, the M1 was designed by famed Italian stylist Giorgetto Giugiaro of Italdesign. The car was first intended for FIA racing homologation with production to be performed by Lamborghini for BMW. Eventually, the M1 became a wholly BMW-managed project. There were just 349 road models produced. A further 53 racecars were made for a high-profile, single-marque series in support of F1 Grand Prix races.

The M1 is capable of exceeding 162 mph with power delivered by a slightly detuned variant of the 3.0 CSL racing engine. Due to this, the M1 remains a sporting legend today. Finished in Henna Red, this 1981 BMW M1 was originally delivered to The Netherlands. Then it was imported to the US circa 1982 by a North Carolina-based collector. He gifted the car to his son, who kept it until 2019. Offered in delightfully unrestored condition, this 1981 BMW M1 is a strong example of these rare and immensely collectible performers.