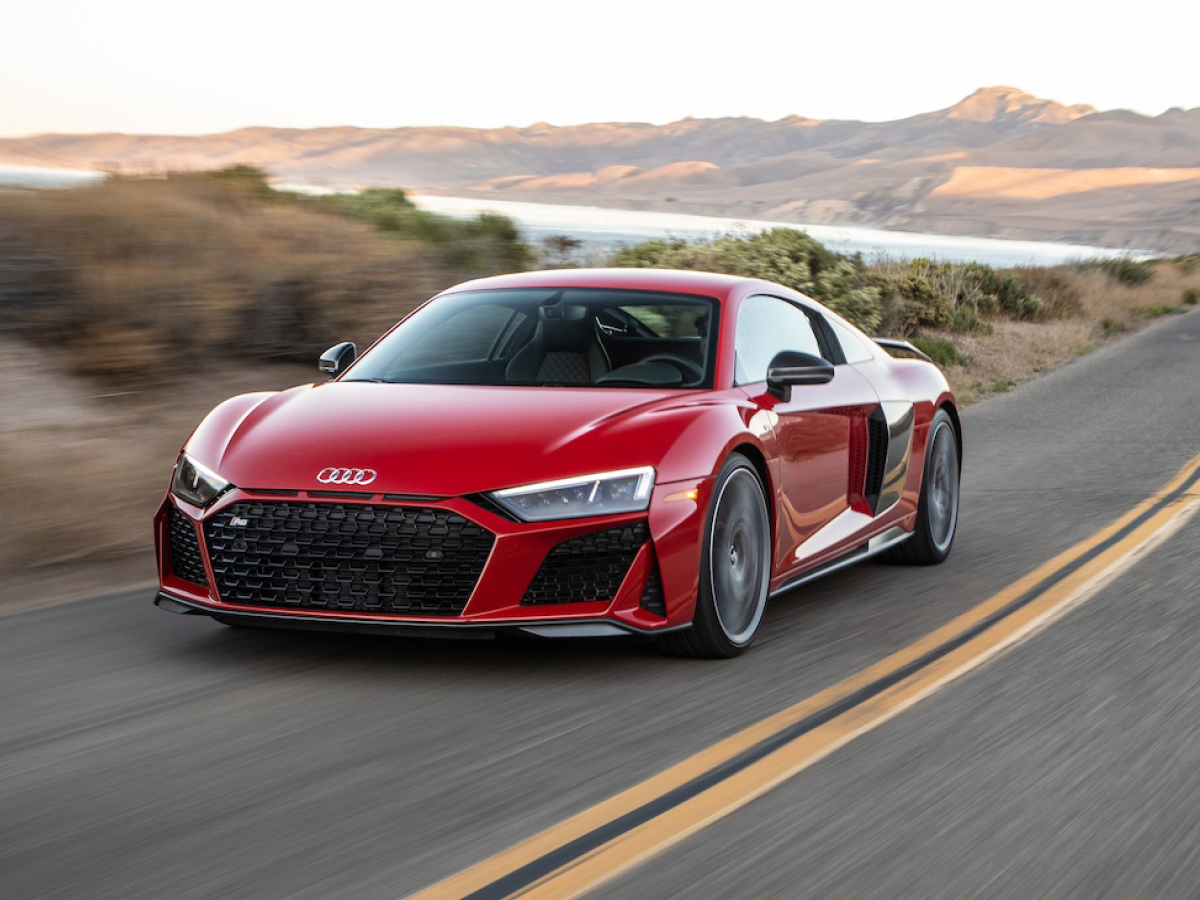 Nearing the end of an era

Given the steady EV news streaming out of Volkswagen Group, it’s no shock to learn that Audi had officially said any replacement for the current R8 supercar will be a battery electric. We can assume that an Audi EV supercar will be as fast or faster than the current V-10 powered R8, but it likely will be a much different sensory experience.

For those who crave the wail of the R8’s V-10 engine – shared with the Lamborghini Huracán –  the piston-engine car is still in production, and there are plenty to be had in the secondary market. As supercars go, pricing is on the lower end. All models combine distinctive design, impeccable engineering, stunning handling and everyday drivability.

When Volkswagen Group acquired Lamborghini in 1998 and put it under Audi’s umbrella, it might have seemed implausible that Audi could launch a mid-engine supercar into Lamborghini’s realm. Was that good business? It turned out to be very good business for both – and great for supercar enthusiasts as well.

The first-generation Audi R8 debuted at the Paris Auto Show in September 2006 and came to the U.S. as a 2008 model the following year. The second generation R8 arrived here in 2015 as a 2017 model.

Development and production of the R8 fell to Audi’s motorsports department, then called Quattro GmbH and changed to Audi Sport in 2016. The R8 was built around the aluminum Audi Space Frame chassis with aluminum, carbon fiber and magnesium strategically used throughout the car, though a 3,500-pound weight for the V8 model was not exactly light.

The R8’s design clearly made it a member of the Audi family, a bit like a bigger, badder brother to the brand’s little TT model. With its large-ish upright grille, the R8 could almost have been mistaken for a very low-slung front-engine car, an effect even more pronounced on the current generation model. Vertical trim panels in contrasting colors just behind the doors were designed to help disguise the car’s length, which has triggered widely diverging opinions.

Though the Audi R8 and Lamborghini Gallardo shared basic mechanical elements, they were really quite different cars. The Audi was longer, with some differences in the chassis.

The R8 debuted with a 4.2-liter V-8 engine making 420 horsepower and 317 lb-ft of torque and using a dry-sump oiling system to fit the engine as low as possible. The customer could choose between a six-speed manual transmission or an automated version, which Audi called R-tronic. Most chose the latter.

Audi’s standard Quattro all-wheel drive system biased torque to the rear wheels in a 60:40 ratio in most driving. (The Lamborghini Gallardo shared all of those systems.) Automotive media swooned over the R8, praising it as a truly everyday supercar.

In its second year, the R8 added a second power choice, a 5.2-liter V-10. Though sharing some aspects of the Gallardo’s engine, the two were not exactly the same. Moving up to the V-10 gave the R8 driver an additional 105 horsepower. Despite a 150 added pounds, the V-10 was faster than the V-8. Motor Trend, which calculated its 0-60 mph in 3.4 seconds, showered the higher-power version with great praise: “Audi has improved upon near-perfection.”

In a pop-culture product placement, the Audi R8 was the official ride of industrialist / superhero Tony Stark in the “Iron Man” movie franchise, starring Robert Downey, Jr. as Stark. Naturally, Audi milked this connection for all it was worth.

Audi jumped into the “race car tamed for the street” game with the 2012 R8 GT, featuring a 560-hp version of the V-10, and rear-wheel drive instead of all-wheel drive. That change, plus some lightweight glass and other pieces, cut 220 pounds of weight. Audi made just 333, sending 90 to the U.S., including 40 coupes and 50 Spyders.

Audi made 27,000 first-generation R8s for global sales, a best-seller among its ilk. The second-gen model arrived as a 2017 model in the U.S., and it met or exceeded heightened expectations. The design theme was similar, but edgier.

Beneath the skin, the second-generation R8 and its Italian cousin, the Lamborghini Huracán, shared basically all mechanical elements, including the 5.2-liter V-10. (There was no V-8 for the second-gen R8.) As in the Huracán, a new seven-speed dual-clutch paddle shift automatic transmission replaced the previous pair of six-speed transmissions. In the R8, the V-10 made 540 hp in the standard model and 610 hp in the “Plus.” In an R8 Plus coupe, Car and Driver caluclated 0-60 in just 2.9 seconds. The heavier Spyder was nearly as quick.

The choice of a lighter rear-wheel drive R8 returned to the U.S. for 2021 in the guise of the ultra-limited Panther Edition, with just 30 cars available. For 2022, rear-wheel drive is now the standard drivetrain for both coupe and Spyder, with 562 hp from the V-10 and prices starting under $150,000. Versions with Quattro all-wheel drive have 602 hp.

Performance is electrifying in any R8 model, but if you want to experience the joy of driving a ferocious V-10 model before “electrifying” takes on literal meaning in an Audi supercar, get an R8 now.