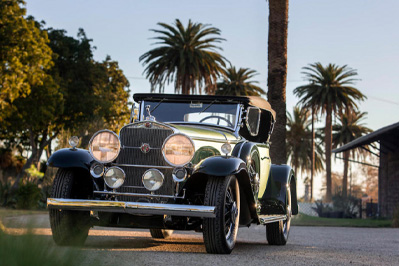 Headlined by the Boulton Collection, an unparalleled array of prewar cars and motoring antiques, the Bonhams auction leads Amelia Island in automotive diversity. Their docket ranges from a Lamborghini Diablo VT to an assortment of brass era speedometers. Regardless of style or vintage, Bonhams has something to please any of the distinguished motoring enthusiasts at the Amelia Island Concours d’Elegance.

In spite of all this variety, it is Bonhams’ Porsche offerings that the Premier Team is most interested in. Here are a few of the cars our leasing experts are watching.

Juan Garcia, Premier’s Sales Manager for the West Coast, is watching the 1998 RUF Turbo R at Lot 214. Born a not-so-humble 993 Turbo, RUF transformed this 911 with bored-out cylinders and innumerable mechanical and aesthetic modifications. Horsepower is conservatively rated at 520. That makes this two-door rocket perhaps the ultimate air-cooled Porsche. The example on offer is particularly notable as the former car of a Porsche family member. High praise for any automobile.

Premier’s Northeast Sales Manager, Keith Neelans, has chosen the 1956 Porsche 356 Speedster at Lot 213. The Speedster attained iconic status as the car of choice for privateers and weekend racers. Porsche stripped the 356 of its amenities and weather protection, allowing the Speedster to be both less expensive and more powerful than the base model. The formula worked; soft-tops like these crowded podiums and continued in the footsteps of the 550 Spyder, fighting giants with only a small four-cylinder under the hood.

Michelle Yancey, our Southwest Sales Manager, has her eye on Lot 307‘s 1984 RUF RSR. Sold as a 930-series Porsche 911, the original owner had it shipped to RUF for a series of extensive modifications. This one-off build boasts racing-inspired aluminum coachwork and a twin-turbocharged 700 bhp flat-six. RUF modified cars like this one have a special significance for Michelle, as she counts the nation’s only RUF dealership among her clients.

Midwest Sales Manager Ross Dressel likes the 1989 Porsche911 Speedster at Lot 212. Produced in small numbers, the Speedster honored its 356 predecessor with minimal weather protection and improved performance over the base 911. This example is particularly rare, clad in Titanium Silver over a Bordeaux leather interior with less than 4,000 miles on the odometer.

Though the antiques in the Boulton Collection piqued his interest, Southeast Sales Manager Chris Warren can’t help but go with the 1969 Nissan Skyline 2000 GT-R. Located at Lot 304, the 2000 GT-R was a lightened, performance-oriented sedan designed to highlight the Skyline name’s decade of racing successes. Few Skylines are exported out of Japan, and fewer still escaped the attrition of the racetrack.

Premier’s corporate headquarters in Woodbury, Connecticut is following the 1974 Porsche 914 at Lot 236. The mid-engined 914 came about as a joint venture between Volkswagen and Porsche, offering nimble cornering at an affordable price. Though the far less common 914-6 has enjoyed lasting appreciation. Likewise, the standard 914-4 was never one of the marque‘s most popular models; just a few years ago, the idea of a 2 liter with a 6-figure valuation, let alone one with a Ravenna green livery, would have been preposterous.

A Simple Lease from Premier Financial Services takes the stress out of bidding at auction. Premier is your path to any high-end automobile, from leasing a Porsche from auction to driving it home from the dealer. Bidders are determined at Bonham’s Amelia Island Auction, so avoid a costly mistake with our auction basics.