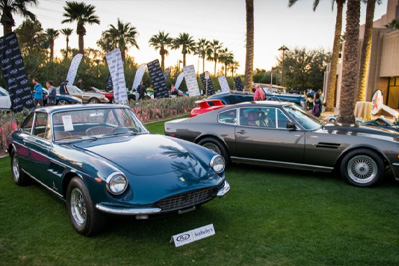 Instead of China, RM Sotheby’s is celebrating the occasion with over 100 investment-grade automobiles. Their docket ranges from a tractor made by Porsche to a 2017 Ferrari F12tdf. There is a Lot in between for every interest and every dream. If you plan to add a car among them to your collection, there’s still time to reap the benefits of leasing your auction acquisition with Premier.

Premier’s team of leasing experts will be following the auction closely for fluctuations in collector car values. Here are a few of the cars they’re most interested in.

Keith Neelans, Sales Manager for the East Coast, is a fan of the Mercedes-Benz 300 SL at Lot 264. Following a score of racing successes, Mercedes-Benz decided to transform their aerodynamic, gullwinged W194 race car into a road car. The result became one of the most iconic sports cars ever produced. The 300 SL’s mechanical fuel-injected inline six provided unparalleled performance, while the auto’s unique doors allowed for wide sills to increase rigidity.

Juan Garcia, Premier’s West Coast Sales Manager, is drawn to the thrilling performance of the Ferrari at Lot 149. The 288 GTO is the predecessor of the famed F40 and further established the marque‘s tradition of low-production halo cars. Originally planned as a rally car, the 288 GTO found its way to the road after the infamous Group B was cancelled. Further, it retained its 400hp dual-turbocharged V8 and rally-bred suspension. Leather seats were added to civilize it for public streets. Electric windows were optional.

Southwest Sales Manager Michelle Yancey is watching the Rally Red Corvette Sting Ray. Located at Lot 128, this 1967 Chevrolet is among the last and best of muscle-car era Corvettes. Equipped with a triple-carbureted big block 427, this sleek convertible produced 435hp in stock configuration. In addition, the example on offer shipped from the factory with some of the most desirable options, including a close-ratio 4-speed manual transmission, power brakes, and F41 suspension.

Chris Warren, our Southeast Sales Manager, has his eye on the Porsche 911 Carrera RS at Lot 150. Meaning Rennsport, or race sport, the RS designation is legendary among Porschephiles. Further, the praise is deserving, as RS models often find their way to the tops of podiums and record books. The 964 iteration offered here is as potent on the back roads as it is on the track. It benefits from a punchier flat six, limited-slip differential, and a lower ride height than the base 911 Carrera.

Lot 246‘s BMW 507 is turning heads at Premier’s corporate headquarters in Woodbury, Connecticut. Designed by Count Albrecht von Goertz under the direction of famed importer Max Hoffman, the BMW 507 might as well have been a space ship when it was released in 1956. Likewise, its avant-garde styling made it a media darling, even finding its way into the garage of Elvis Presley. Equal attention was given to the aluminum V8 underneath the sumptuous curves. This example had a restoration and showing at the Pebble Beach Concours d’Elegance in 2002.

A Simple Lease from Premier Financial Services takes the stress out of bidding at auction. Premier is your path to any high-end automobile, from leasing a rare tuning-house Porsche from auction to driving home that Ferrari from the dealer. Bidders are determined at RM Sotheby’s Scottsdale Auction, so avoid a costly mistake with our auction basics.