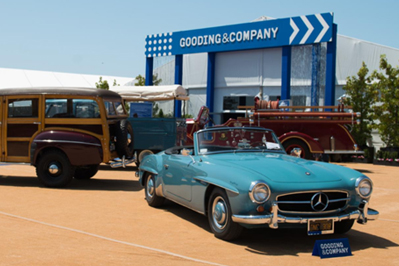 For years, Gooding & Company has had the honor of being the official auction house of the Pebble Beach Concours d’Elegance. It’s more than just a marketing agreement when working with an event like The Pebble; Gooding’s docket is held to a higher standard, with careful vetting of each of the accepted automobiles. Be sure to plan ahead to avoid missing any of the 150 cars crossing the block at the Pebble Beach Equestrian Center.

Premier’s Team of car enthusiasts and Leasing professionals will be watching the auction closely. Here are a few of their favorites.

Lot 60‘s 2004 Porsche Carrera GT has caught the attention of our Southwest Sales Manager, Michelle Yancey. A true supercar, the Carrera GT made use of a 605hp mid-mounted V10 derived from a Porsche racing engine. All that power had very little to tow around, as the chassis, a latticework of carbon fiber, aluminum, and plastic, weighed only 220 pounds. A rear-wheel drive layout and no driver’s aids made the GT dynamic, if a bit unforgiving.

Chris Warren, Premier’s Southeast Sales Manager, counts himself among the Bugatti Type 57C’s many admirers. The Type 57 was a line of touring automobiles made between 1934 and 1940. To keep up with demand for more power, the Type 57C was developed with a supercharger that brought power up to 160bhp. The Type 57C selling from Lot 132 earned a class win at Pebble Beach in 2011.

Premier’s Northeast Sales Manager, Keith Neelans, is watching the 1994 RUF BTR2 at Lot 138. Beginning as a Porsche dealer, RUF was certified as a car manufacturer in 1981 and continues producing its own supercars based on Porsche underpinnings. Based on the 993 Carrera, the BTR2 made use of twin turbochargers to produce 400bhp over the Porsche’s 272. Though the shape is familiar, the BTR2 is unique.

Kyle Lane, Midwest Sales Manager, has his eye on the Ferrari Dino 246 GT at Lot 29. The 246 GT was originally marketed under the Dino marque, owing to its lower price and smaller engine. However, Ferrari came around for later models of the Dino, allowing it to wear the prancing horse. Collectors have come around as well, giving the 246 GT the six-figure values it deserves.

Our West Coast Sales Manager, Juan Garcia has chosen Lot 51‘s 1955 Porsche 550 Spyder. Nicknamed the “Giant Killer” for its ability to out-race cars with much larger engines, the 550 Spyder is a major character in Porsche lore. Looks, mechanical ingenuity, and a host of famous owners set the 550 apart from other racecars. This example was campaigned extensively throughout the 50s.

Lot 37‘s Maserati A6G/54 is a favorite of the team at Premier’s corporate headquarters in Woodbury, Connecticut. Only 60 A6G/54s were produced making it the final and most exclusive Maserati in the A6 line. Of those 60, only 20 were made with a light alloy body from Zagato. With a twin-cam straight-six and an advanced chassis, the A6G/54 was a preeminent road racer. After crashing out of the 1956 Mille Miglia, this car was returned to Zagato where it received its unique double-bubble coachwork.

A Simple Lease from Premier Financial Services takes the stress out of bidding at auction. Premier is your path to any high-end automobile, from leasing a rare tuning-house Porsche from auction to driving home that Lamborghini from the dealer. Bidders are determined at Gooding & Company’s Monterey Auction, so avoid a costly mistake with our auction basics.