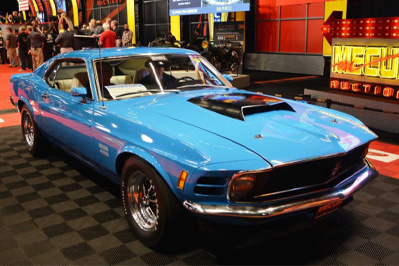 The Best of Both Worlds

For their Monterey Car Week auction, Mecum is pulling out all the stops with a massive docket of exotic sports cars and the finest American muscle to please the discerning enthusiasts at Pebble Beach. Over the course of three days, Mecum will usher hundreds of cars, boats, and even tractors across their famous red carpeting. From low-production hypercars like the Lamborghini Centenario to the quiet elegance of a Rolls-Royce Silver Cloud, it won’t be hard to find a spot for Mecum on your itinerary.

Our team of leasing experts will be staying on top of the auctions to assist their clients. Here are a few of the cars they’re watching.

Premier’s Southeast Sales Manager, Chris Warren, was drawn to the triple black 1965 Porsche 356 Cabriolet at Lot F113. The last in an iconic line of automobiles, the SC has the most powerful engine ever offered in a 356 mated to a four-speed with disk brakes to hold it all in check. As the product of years of racing innovation, this 356 is made for the road; it was shipped from the factory without a radio, needing only a stretch of tarmac for the numbers-matching 1600cc engine to provide its own soundtrack.

Still decked in its original wood paneling, Lot F67’s 1941 Plymouth P12 has caught the eye of Southwest Sales Manager Michelle Yancey. This barnfind was stowed away for almost fifty years before a nut-and-bolt restoration returned it to the roads. With Cream paint and a swooping grille, this Woodie Wagon was a spot of whimsy in a dark time.

Lot S106’s 2015 Porsche 918 Spyder is a favorite of Keith Neelans, our Northeast Sales Manager. As one of a new era of hybrid supercars, the 918 has a 600hp V8 paired with two electric motors delivering an additional 282hp.  The V8 has grunt for higher RPM, while the electric motors provide off-the-line power. The resulting 2.2 second 0-60 put it well ahead of the Mclaren P1 and LaFerrari.  This example has only 855 miles on the odometer and the Martini livery over its Basalt Black paint.

The 1958 Porsche 550A Spyder at Lot S91 is a star of the Mecum auction, and would be the main attraction of any auction lucky enough to offer it. A favorite of West Coast Sales Manager Juan Garcia, the 550A is an evolution of the revered 550, benefiting from a more rigid frame, a lower center of gravity, and a 5-speed transmission. Now wearing a new suit of polished aluminum, this example was raced extensively in Europe, often landing its driver on the podium thanks to its advanced 4-cam boxer engine and nimble handling.

Midwest Sales Manager Kyle Lane is looking forward to Mecum’s sale of a 1987 Porsche 930 Turbo. While the 911 line continues to this day, the 930 Turbo stands out with its aggressive styling and dynamic, unassisted handling. By the late 80s manufacturers still struggled with U.S. emissions regulation, but Porsche managed to comply and deliver an air-cooled 911 capable of a 4.4 second 0-60. Lot R234’s is particularly attractive in Grand Prix White with matching alloy wheels over a black leather interior that accentuates the Turbo’s black styling cues.

Premier’s corporate headquarters in Woodbury, Connecticut is watching the 1967 Ghia 450SS at Lot F110. One of only 52 produced, this Ghia combined a powerful Chrysler V8 with low-slung Italian styling. Based on the Plymouth Barracuda Formula S, the 450SS is an open-topped American muscle car with elegance straight from the pen of Giugiaro.

A Simple Lease from Premier Financial Services takes the hassle out of bidding at auction. Premier is your path to any high-end automobile, from leasing an unusual Ghia from auction to driving home that Ferrari from the dealer. But the stakes are high at Monterey, so brush up on the auction basics before the gavel drops.