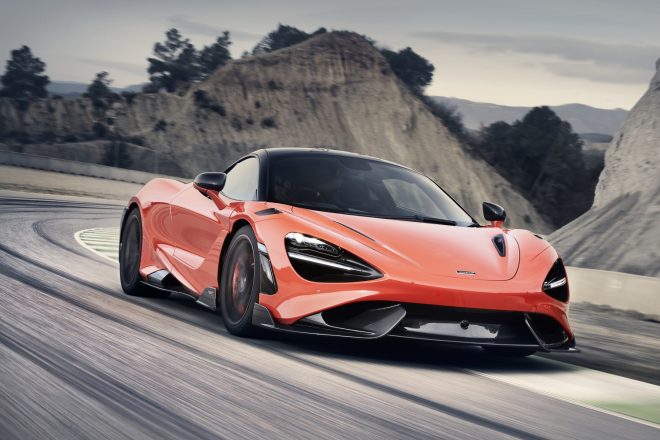 The Long Tail Way to a Short Lap Time

No, we did not transpose the numbers “675” and “765.” McLaren earlier this year introduced its latest lightweight, track-focused model, the 765LT. That’s not to be confused with the 675LT, introduced in 2015.

That previous model’s  performance was so stunning that Car & Driver described it as “97 percent as exciting to drive flat-out” as the McLaren P1. That only portends even higher potential for the 765LT.

The first deliveries are expected in October, starting at about $375,000. Here’s a closer look. 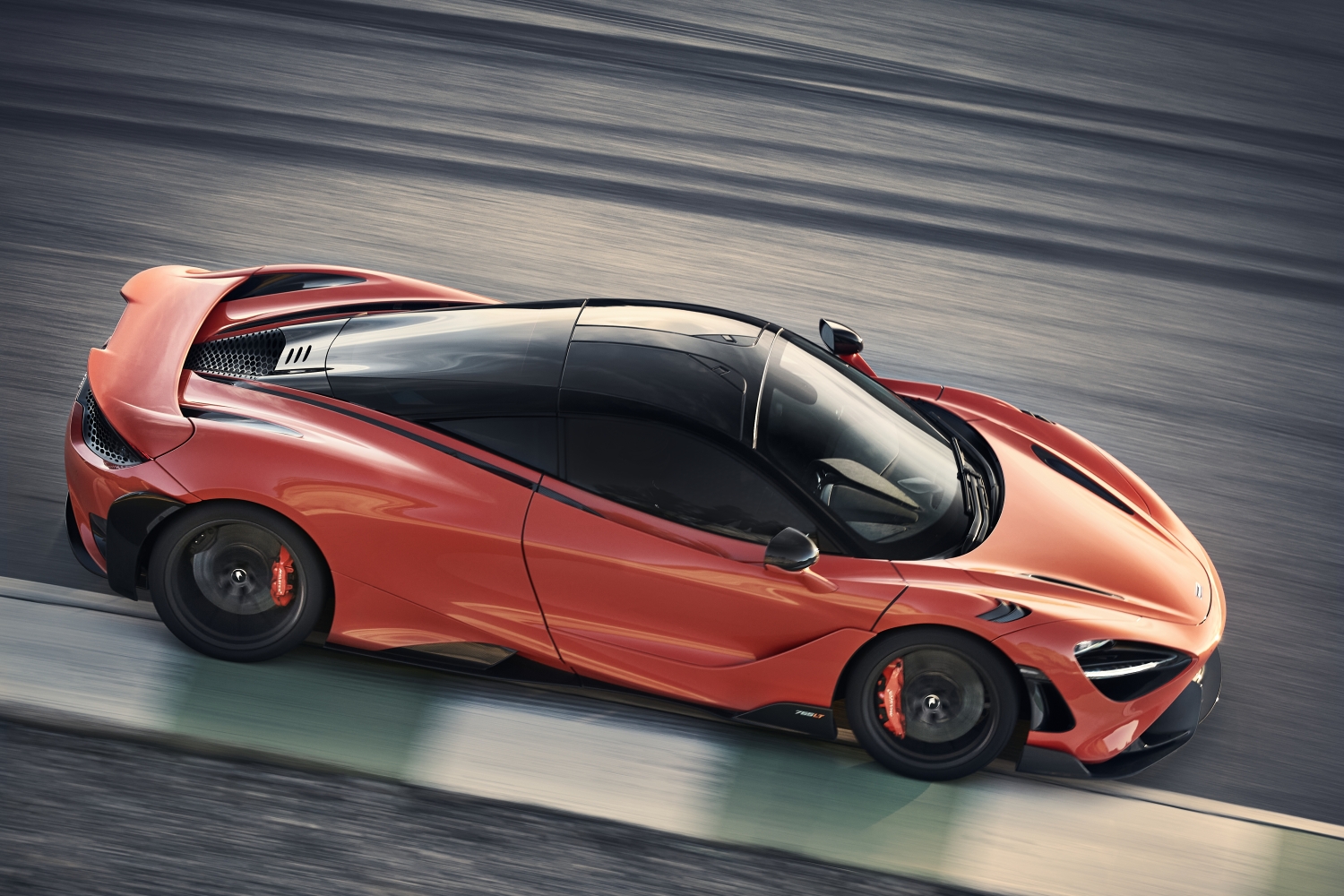 Long Tail is A Philosophy

Like Ferrari and Porsche, McLaren draws on its racing expertise to craft more intensely focused track versions of existing models. For McLaren, these are the LT cars, those initials standing for “Long Tail.” The meaning is not really in the fractional length increase but rather in the obsessive focus on higher power, lighter weight, and an even tighter chassis for lower lap times. 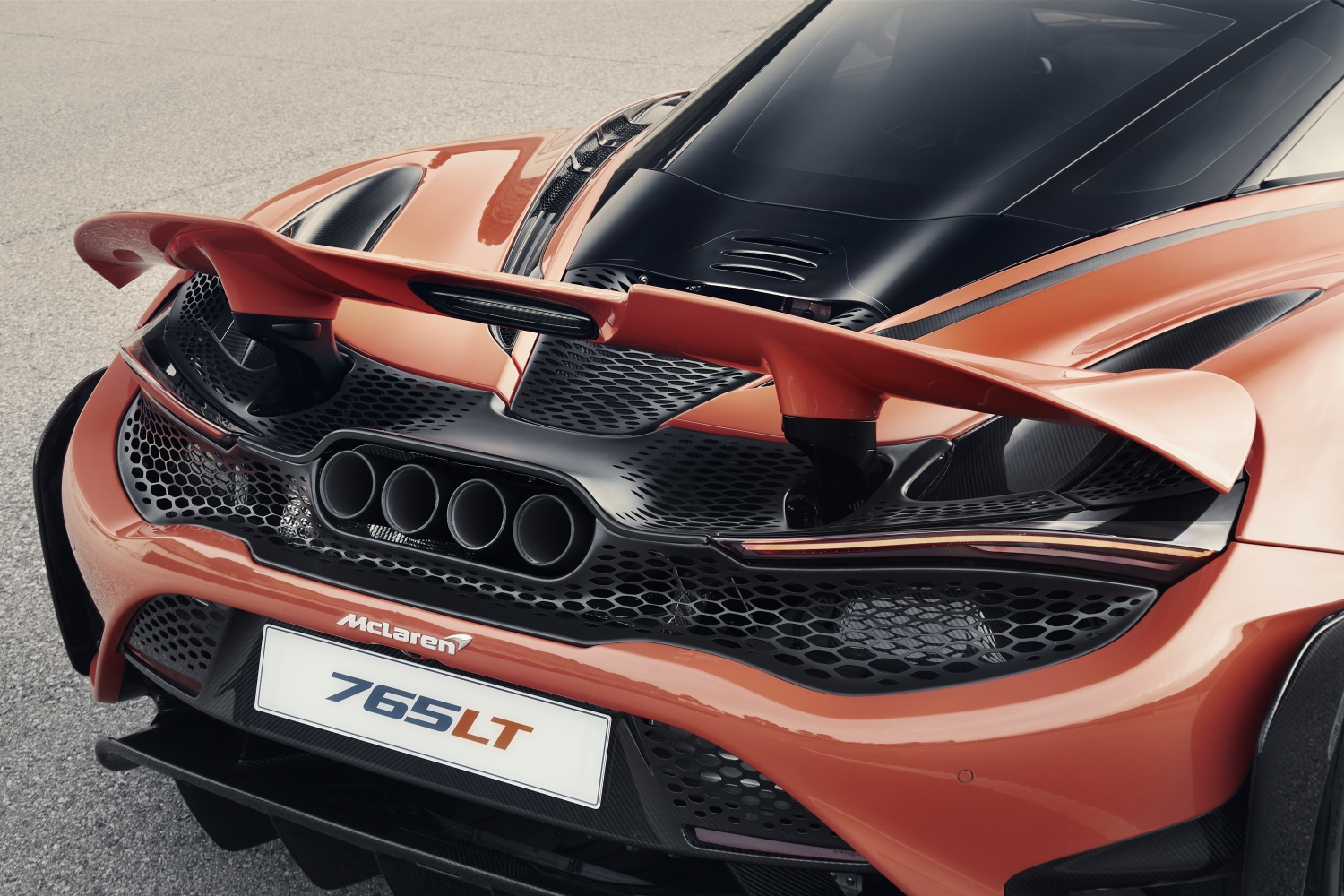 For the approximate $75,000 premium over a McLaren 720S, the new 765LT starts with more power. It’s right in the name, of course: McLaren model nomenclature reflects engine output as “PS,” or metric horsepower. Numerically, it’s just under 99 percent of the brake horsepower we yanks use. For the 765LT, the 765 PS rating translates to 755 horsepower. The 720S, in comparison, offers 710 horsepower.

Also in a nod to that number, McLaren will built 765 of these special lightweight models. About 30-40 percent of those will come to the U.S. In comparison, McLaren brought in about 500 of the 600LT coupe and spider models.

It didn’t take a lot to extract an additional 44 horses from McLaren’s 4.0-liter twin-turbo V-8: forged aluminum pistons, higher-capacity fuel pump, and a titanium exhaust system. The latter terminates in four high-mounted central tailpipes that look like rocket tubes and unleash what promises to be a wonderfully maniacal sound. 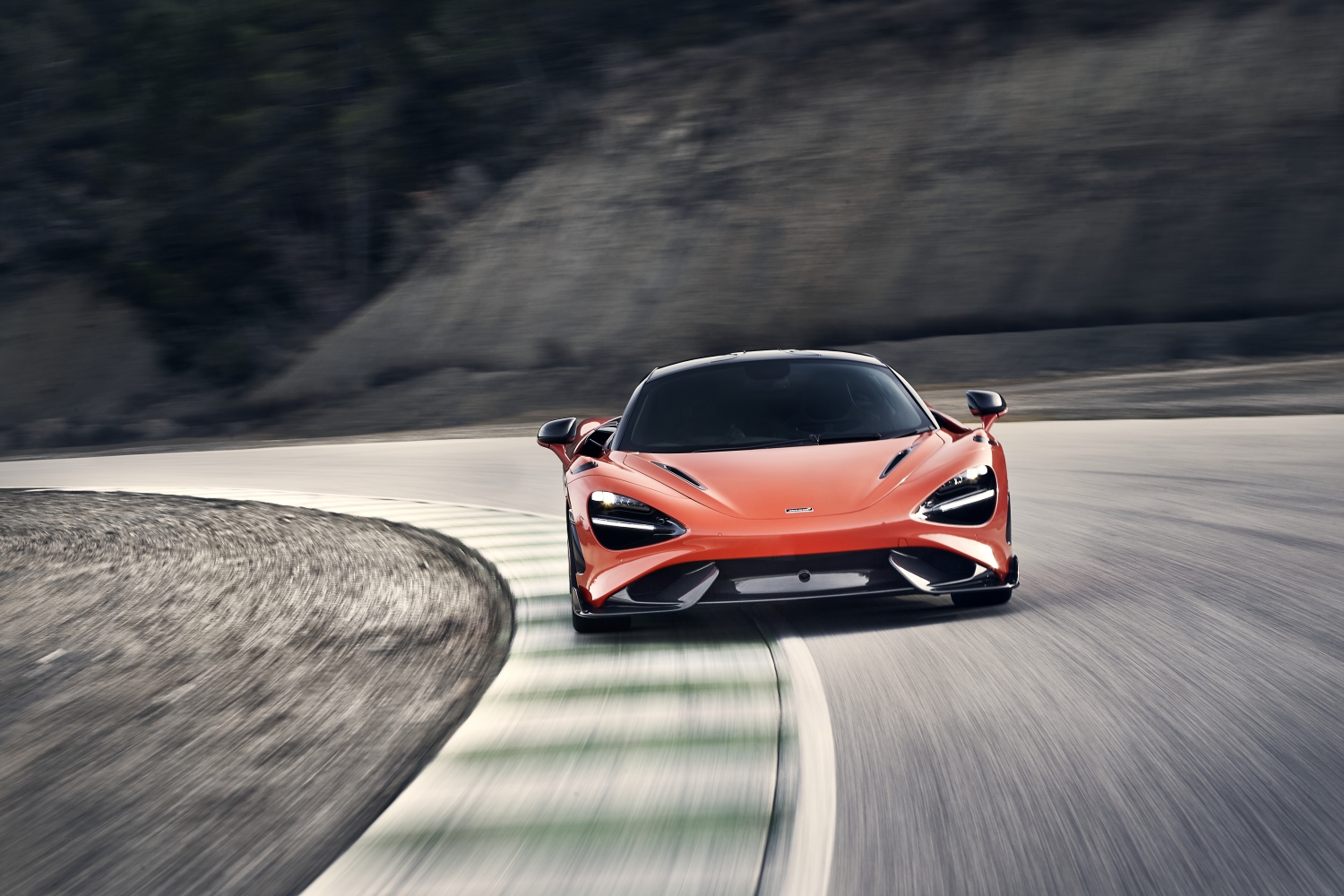 The McLaren 765LT drops about 175 pounds from the 720S, taking weight down to a claimed 2,952 pounds. That’s if you leave out the air conditioning and four-speaker audio system. Even adding those no-cost options, McLaren weight is still under 3,000 pounds. (It must be the world’s lightest A/C system.)

The 720S was already a super-light supercar, so how did McLaren shave another 175 pounds? Among other measures, the 765LT’s lightweight seats cut about 40 pounds; ultra-light forged alloy wheels take off nearly 50; thinner glass and rear polycarbonate windows cut 13 pounds, and a lighter battery saves about that much, too.

Lighter air springs chop 3 pounds total. But really, is sacrificing the carpeting worth the 5 pounds saved? If that’s not enough of a diet, you can opt to switch out the aluminum hood, door handles and fenders for carbon fiber pieces.

How the Numbers Add Up

If you drive a McLaren 720S and jump into a 765LT, don’t expect to feel like you added a rocket engine. Acceleration to highway speeds is similar (meaning, insane), and you don’t get the full effect of the performance upgrades and weight loss until you go gunning for 124 mph (200 km/h). In that sprint, the 765LT cuts 1.2 seconds, taking the time down to an even more insane 7.2 seconds.

Lower gear ratios in the 7-speed dual-clutch transmission help to quicken the 765LT’s pace through racetrack curves. As a consequence, you’ll have to live with a 205-mph top track speed versus 211 mph for the 720S.

Watch out for low driveways, because the different springs lower the 765 LT’s ride height by two tenths of an inch. It’s a good idea to add the optional front-end lift system and live with the few added pounds. 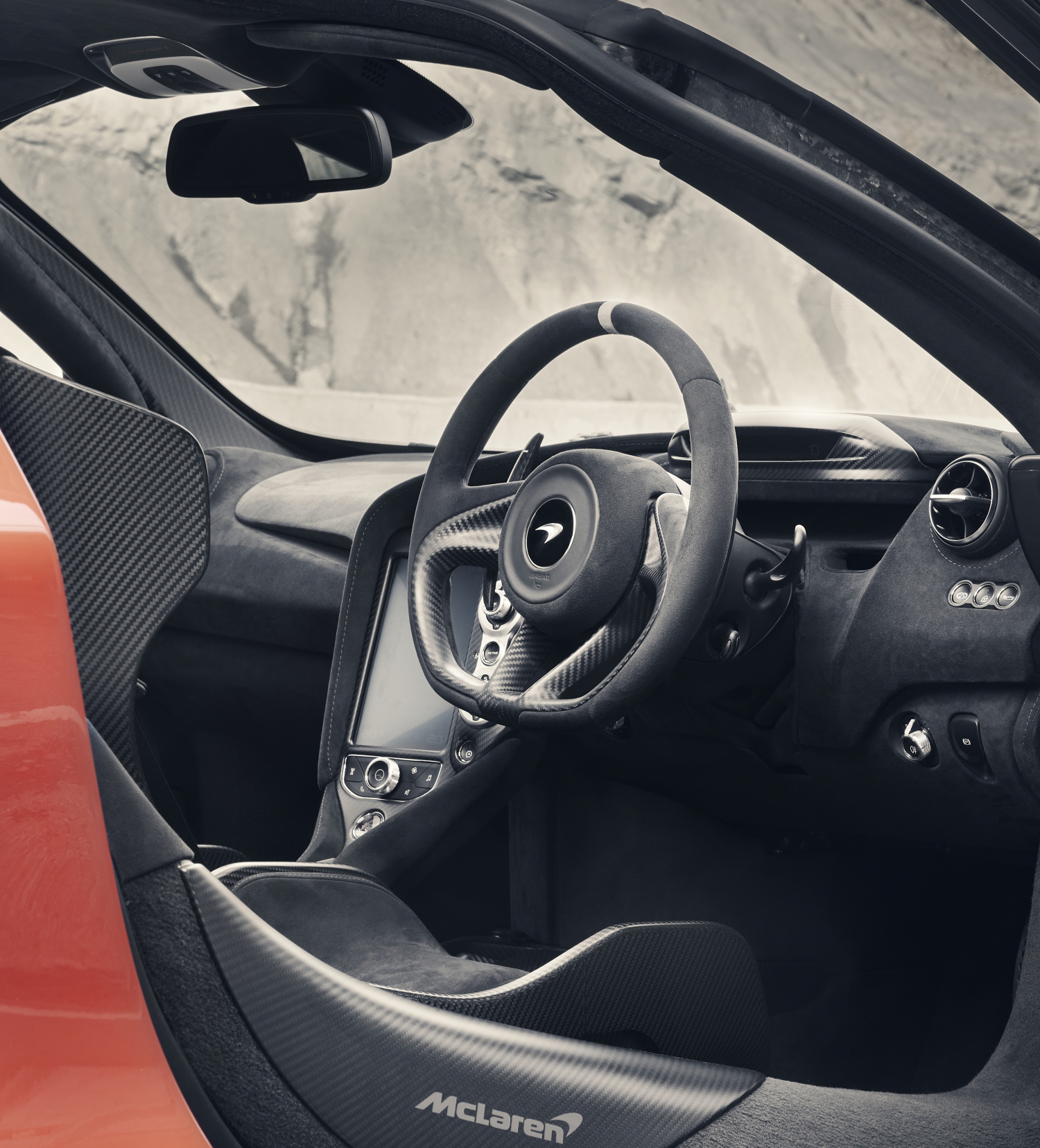 You’d better move quickly to get a McLaren 765LT, and while you’re at it, put your name on the list for the inevitable Spider version. 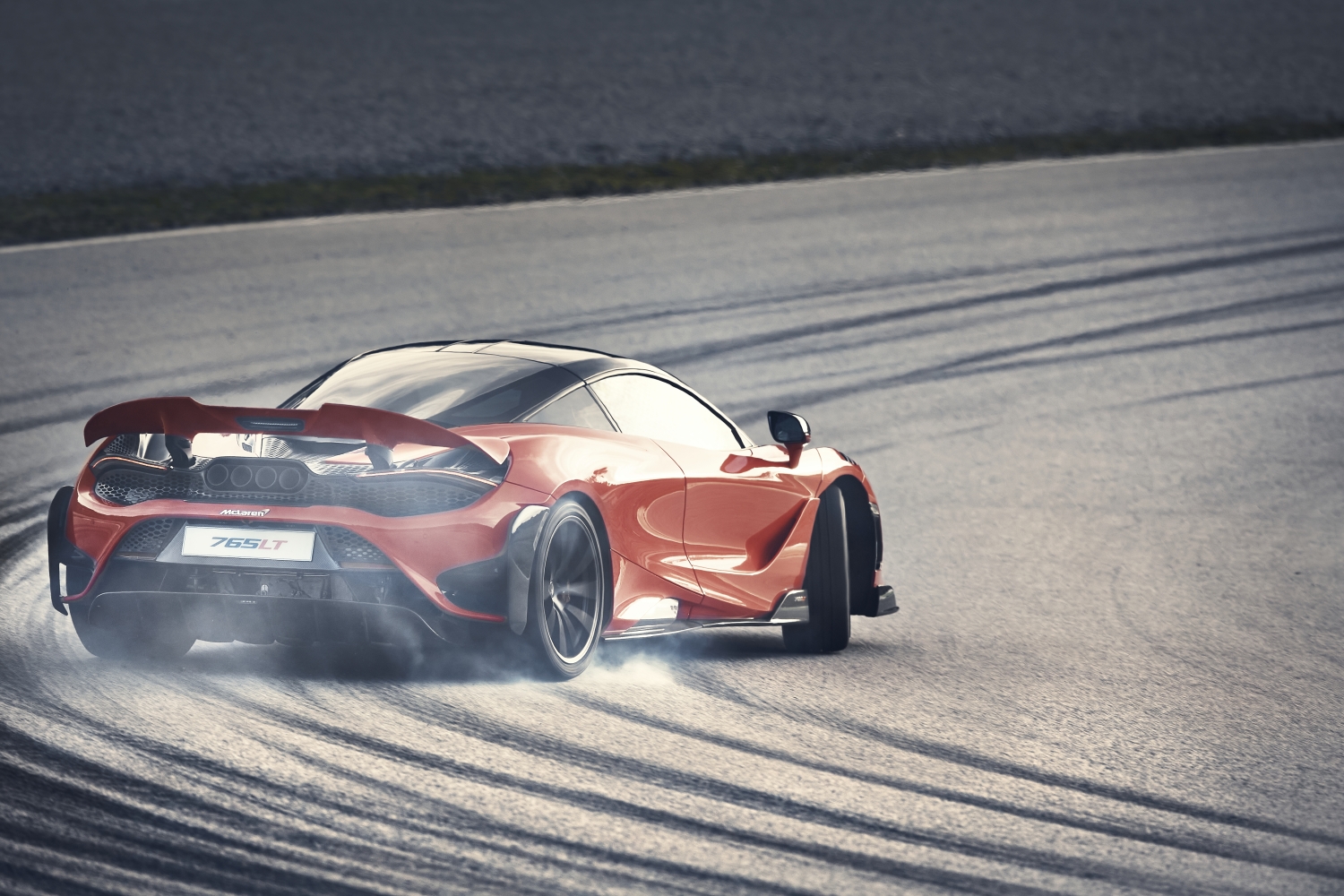