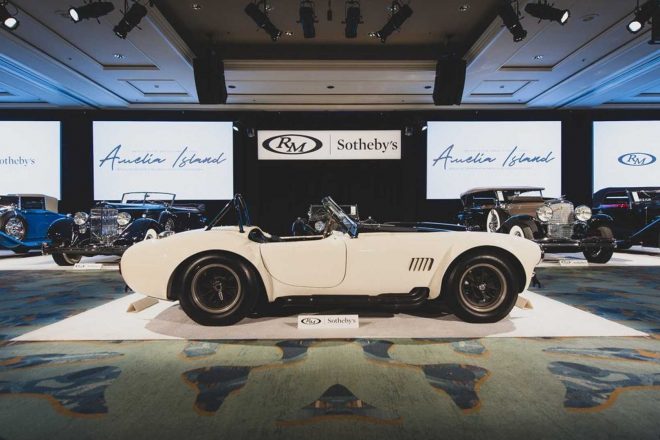 A key part of the Amelia Island automotive festivities since 1999, RM Sotheby’s returns to the beautiful oceanfront grounds of the Ritz-Carlton Amelia Island for the 22nd edition of its Amelia Island Auction. Scheduled for March 6-7, the RM Sotheby’s event stands as the official auction of the Amelia Island Concours d’Elegance. A diverse selection of 150 total lots will be offered, including collectibles and memorabilia, sculptures and also artworks. Automotive lots are a virtual tour through automotive history. These tours range from rare early motorcars to several examples of today’s top high-performance exotics.

Items sure to inspire bidders are an iconic Piaggio Vespa scooter and two miniature versions of classic racing legends- a Shelby Cobra 289 Junior with 110-cc engine and disc brakes plus a Porsche 917 Junior, powered by a 350-cc engine. While small in size, these jewel-like mini racers carry pre-auction estimates of $20,000 – $30,000 and $35,000-$45,000 respectively.

The sales representatives from Premier Financial Services have chosen their favorite vehicles to be offered by RM Sotheby’s at Amelia Island. As the anticipation quickly builds, check out the online auction catalogue here and we hope you will enjoy the coverage of our sale picks below. 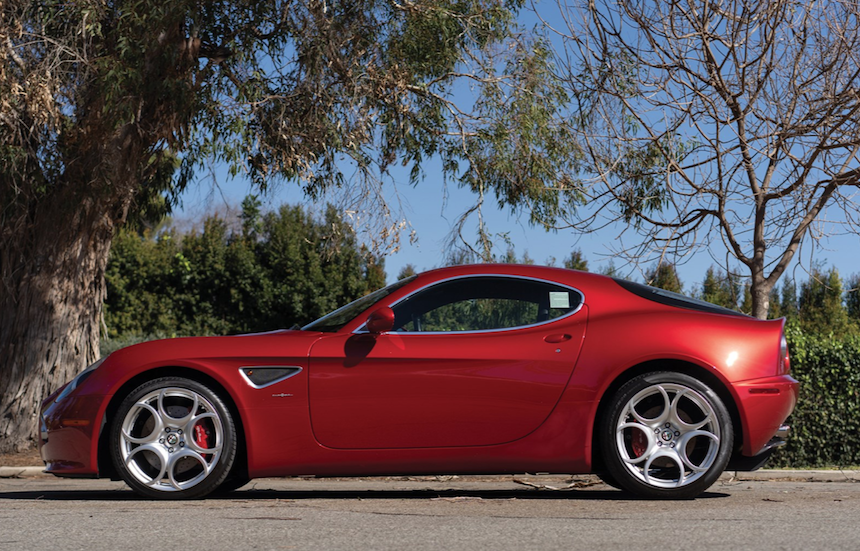 Premier’s Midwest Sales Manager, Ross Dressel, chose Lot 139, this brilliant Competition Red Metallic 2008 Alfa Romeo 8C Competizione as his pick among the many offerings coming to RM Sotheby’s Amelia Island auction. The Competizione was first shown as a concept car at the 2003 Frankfurt Motor Show. It debuted in production-ready form at Paris in 2006. The 8C celebrated Alfa Romeo’s glorious past models, including the T33 Stradale and Giulia TZ. It did this while boldly looking forward with the latest technologies and performance features. Powered by a Ferrari/Maserati-derived, all-alloy V-8 engine developing 450 horsepower, the 8C also features the “Superfast” computer-controlled six-speed rear transaxle shared with Ferrari’s 599 Fiorano. Only 500 were produced, including just 84 U.S. models.

Predictably, 8C production sold out quickly and many were placed into private collections or museums. Provenance of this 8C includes display at the Riverside International Automotive Museum under the ownership of Doug Magnon. Magnon was a well-known and prolific collector of sports and racing cars. He used the 8C only sparingly and retained it until 2016. In addition to its stunning design and paint finish, this 8C includes red brake calipers and custom fitted luggage. Further, it has factory floor mats and full-grain black braided leather upholstery with red stitching. A window sticker, owner’s manuals plus assorted paperwork complete this wonderful modern Alfa Romeo icon. 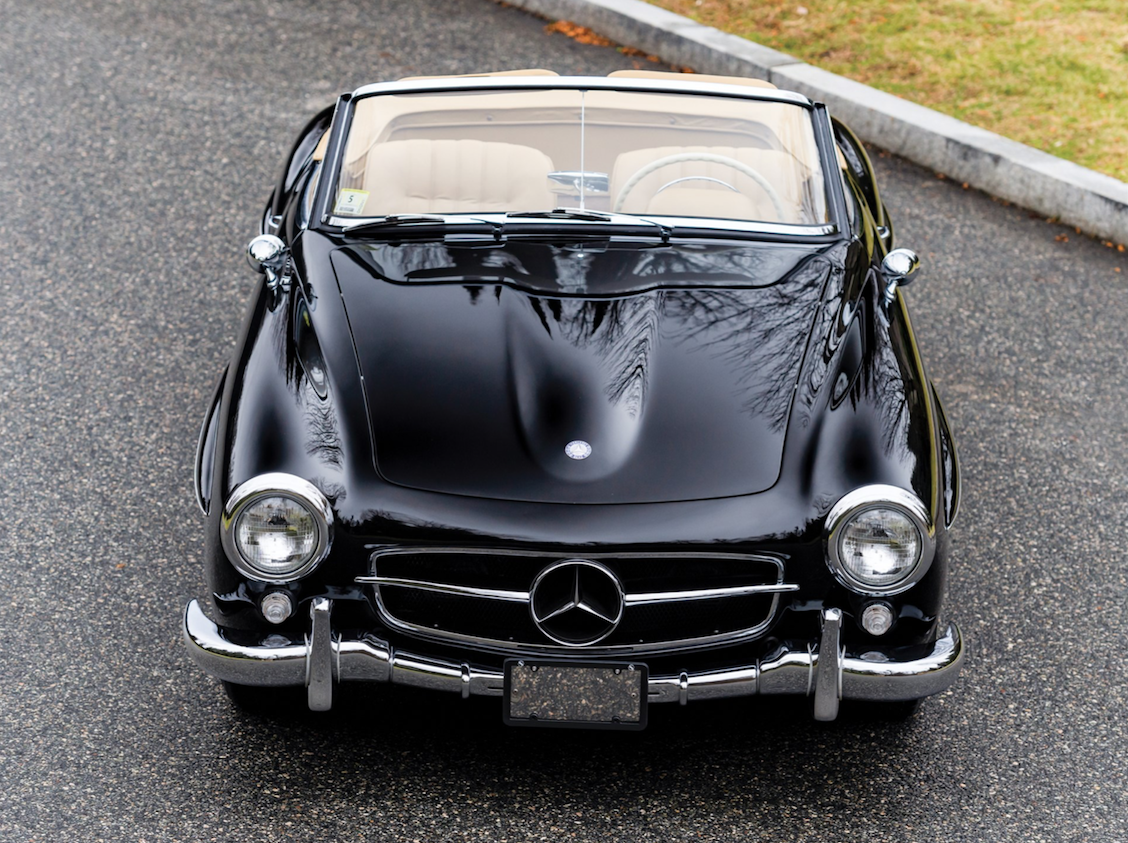 This 1959 Mercedes-Benz 190 SL offered by RM Sotheby’s was selected by Keith Neelans. He is our Northeast Sales Manager who will be at Amelia alongside Chris Warren. This Mercedes was conceived by legendary New York Mercedes-Benz importer, Max Hoffman. Designed as a less complex and more affordable counterpart to the 300 SL, the 190 SL enjoyed production from 1955 to 1963. Further, it struck a chord with buyers with its Continental flair and easier operation and maintenance requirements. While not intended for competition, the 190 SL acquitted itself extremely well. It succeeded in winning a number of international road races and rallies. Now, as when new, the 190 SL enjoys the favor of astute collectors and enthusiasts everywhere.

Offered as Lot 283, this 1959 Mercedes-Benz 190 SL is reported by RM Sotheby’s to have been purchased new in Paris by a lady with dual American and French citizenship and according to the data card, it was factory-equipped in U.S. specification. Subsequently, it was collector-owned and given a “nut-and-bolt” restoration. Limited use since then and professional maintenance have preserved its desirability. 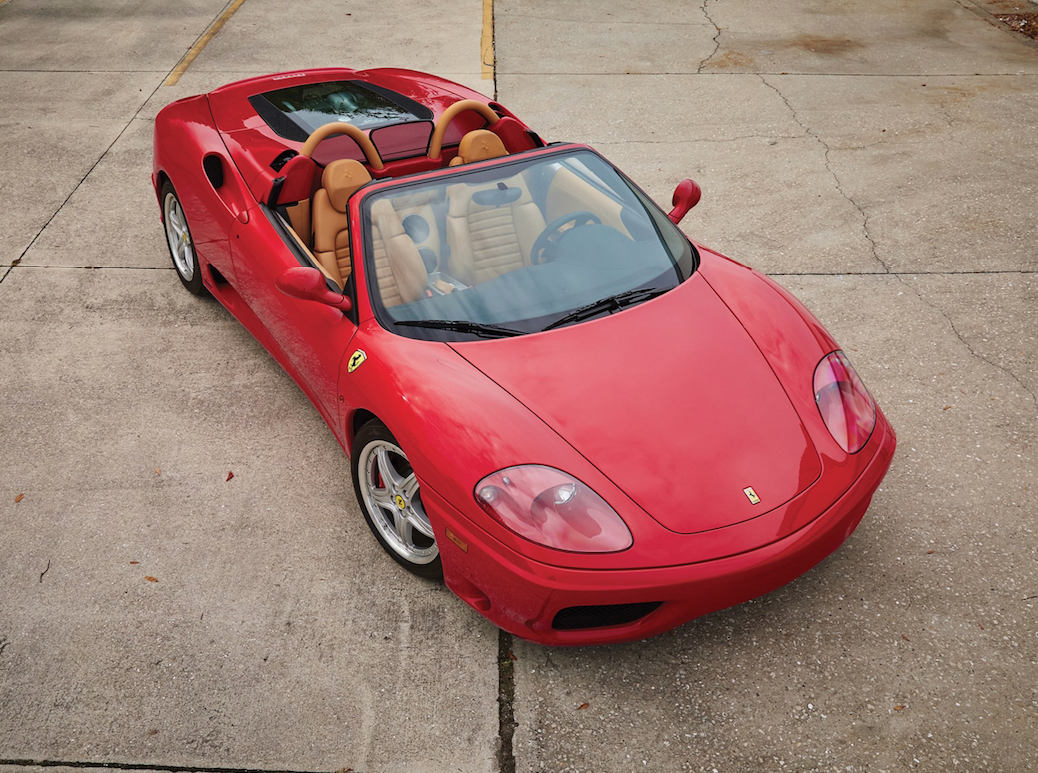 Our Southwest Sales Manager, Michelle Yancey, selected Lot 156, a 2004 Ferrari 360 Spider from the RM Sotheby’s Amelia Island docket. Launched in July 1999 to members of the American motoring press, Ferrari’s new 360 Modena superseded the successful and highly regarded F355. With its all-aluminum construction, it also set the stage for Ferrari’s successful 21stCentury trajectory. Built for extreme performance, the 360 Modena incorporated an otherworldly body design. Further, this vehicle is made with cutting-edge aerodynamic features, exceptional handling and incredible performance credentials including a 183-mph top end. Moreover, the open-air 360 Spider debuted at the March 2000 Geneva Show. It maintained the performance of its closed progenitor with only a minor weight penalty. The penalty was imposed by the electronically operated convertible top and associated mechanisms.

This exceptional 2004 Ferrari 360 Spider was sold new to Texas. It is reported by RM Sotheby’s to have enjoyed single ownership and care for its first 15 years of existence. In addition, it has just 392 indicated miles. Offered in virtual showroom condition, this Ferrari is equipped with iconic Scuderia fender shields, modular wheels, red brake calipers and power-adjustable seats. As one of Ferrari’s finest mid-engine, V-8 models and one that ensured Ferrari’s continued success in the new millennium, this 360 Spider is a compelling find at auction for collectors and enthusiasts alike. 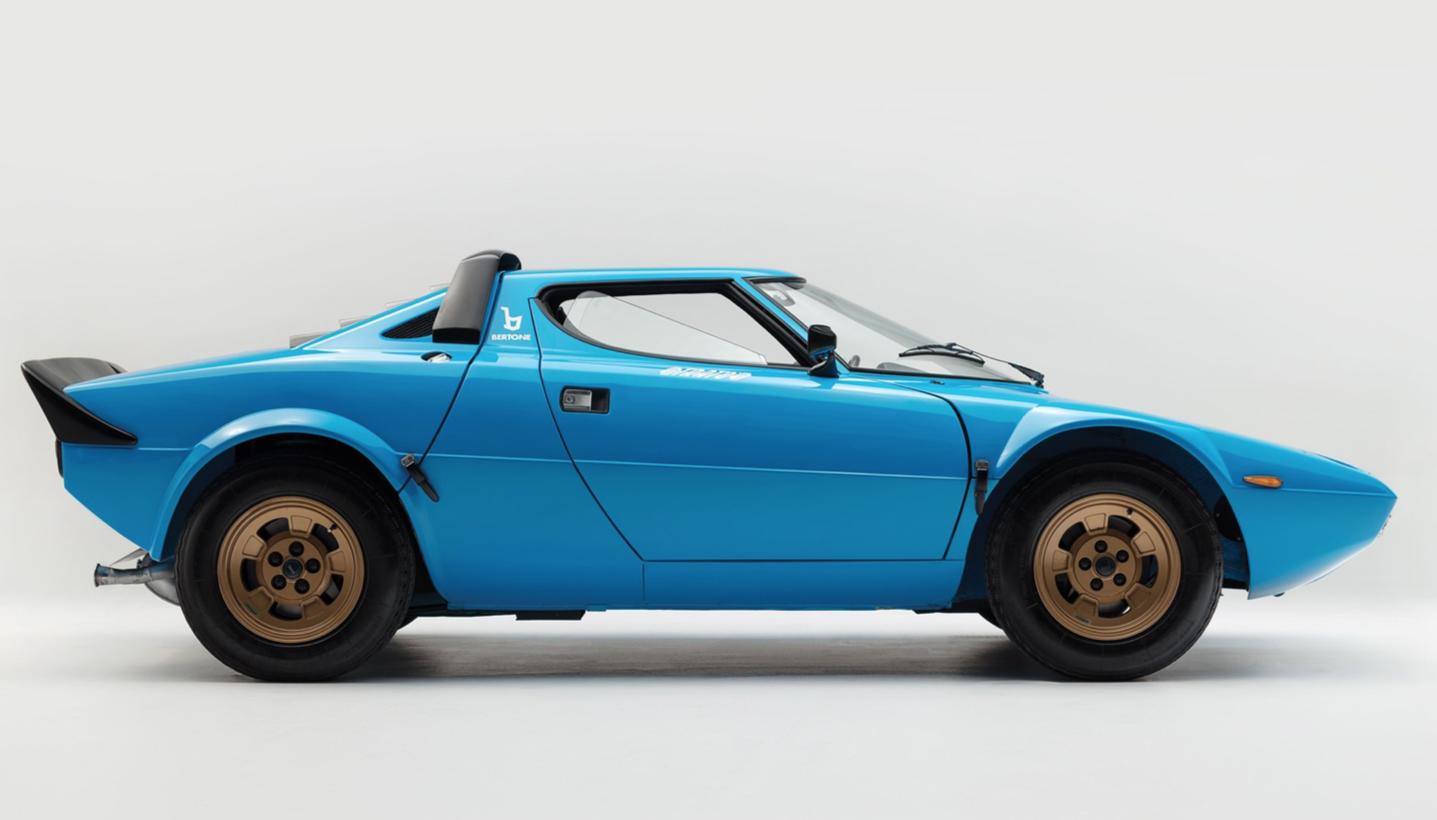 Chris Warren, Premier’s Southeast Sales Manager who will be in attendance at Amelia, chose Lot 133, this extremely charismatic 1975 Lancia Stratos HF Stradale.One of just 492 road models produced to qualify the Stratos for international rally racing, it is an example of what experts believe to be the world’s first purpose-built rally car. Featuring radically purposeful styling penned by Italian design legend Marcello Gandini, the production Stratos utilized a mid-mounted Ferrari Dino V-6 engine/5-speed transaxle. First raced in 1972, teething pains were worked out by 1973, with the Stratos capturing its first win that year. Further, From 1974-76 the Stratos reigned supreme in Group 4 rally competition, earning three consecutive WRC Manufacturer’s Championships. Subsequently, it’s Success continued long after its contemporaries retired. The Stratos  succeeded in propelling Sandro Munari to the WRC Driver’s Championship in 1977. It also led him to victory at the 1979 Monte Carlo Rally.

Recently restored to concours standards, this 1975 Lancia Stratos HF Stradale was sold new in Italy. It soon passed through several owners, including 20 years of sole ownership from 1994-2014 before acquisition by RM’s consignor. RM had the Stratos cosmetically restored in Montréal and mechanical refurbishment performed by Phil Bagley’s Klub Sport Racing in Florida. Offered with ACI (Auto Club d’Italia) registration documentation, this rare Stratos HF Stradale is certain to create a sensation wherever it goes. 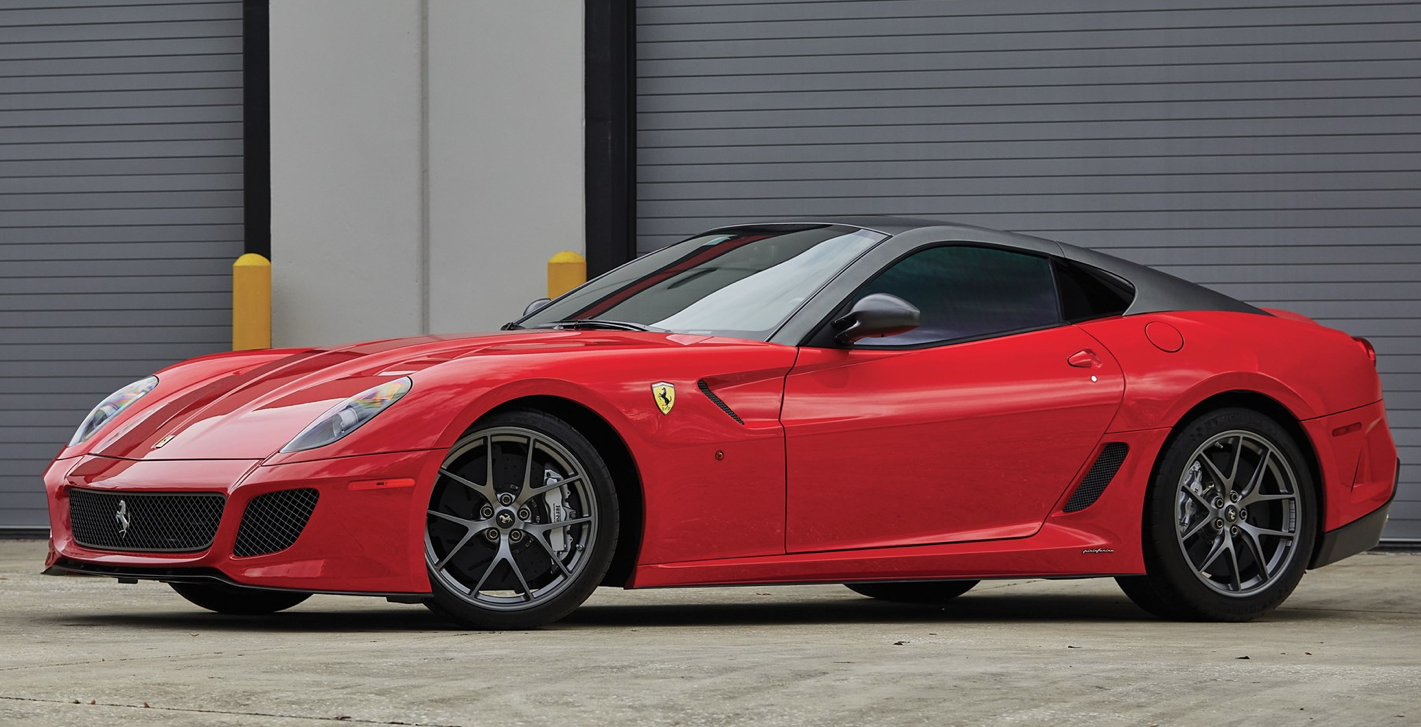 Attracting the attention of Juan Garcia, our West Coast Sales Manager, this Rosso Corsa 2011 Ferrari 599 GTO will cross the RM Sotheby’s auction stage as Lot 127. Just 599 were produced in all – including 125 U.S.-delivery examples. Further, the most potent 599-series road car, the 599 GTO, is powered by a 670-horsepower V-12. It boasts a flat-plane crankshaft, matched to the lightning-quick, single-clutch automatic gearbox shared by the 599XXX. Cutting-edge magnetorheological dampers, staggered Michelin Pilot Sport ultra-performance tires and competition-derived brakes harness the V-12’s power. Performance of the 599 GTO is more than worthy of its namesake. It delivers 0-60 acceleration in 3.35 seconds and a 208-mph top end.

Delivered new to Florida, this 2011 Ferrari 599 GTO is reported by to have just 1,330 miles of use. In addition, according to RM Sotheby’s, it includes some $25,000 in options. While relatively new, it is accompanied by Ferrari Classiche certification and plenty of documentation. More recently, the next owner fitted an aftermarket exhaust system. Celebrating the glorious front-engine, V-12 Ferrari heritage, this 599 GTO is a tour de force in all respects. 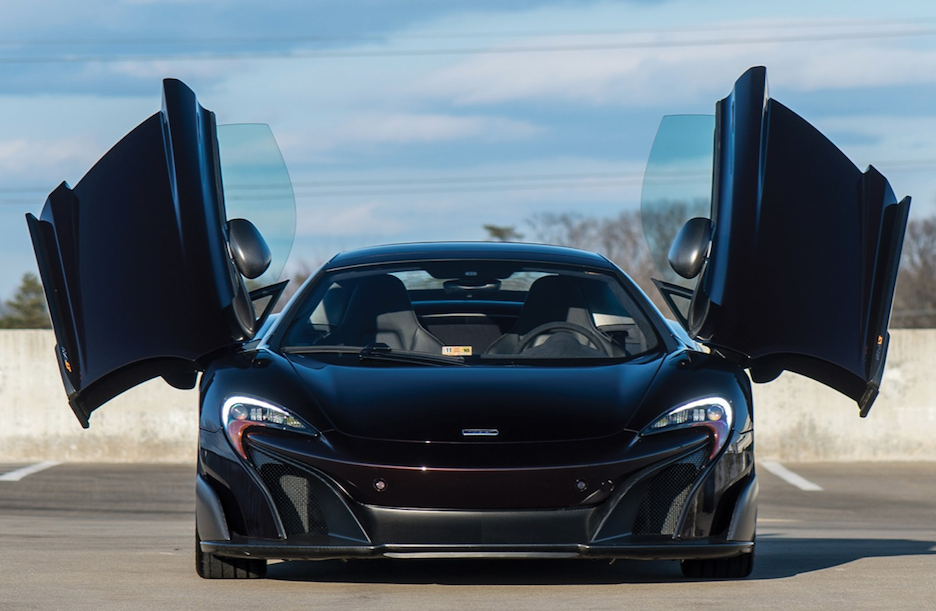 The team members at Premier’s corporate headquarters in Woodbury, Connecticut are collectively watching Lot 138, a stunning 2016 McLaren 675LT Spider. Based on the track-focused, but street-legal 675LT, McLaren’s 675LT Spider delivers an amazing experience. This supercar adds the ultimate, open-air dimension to the 675LT stunning performance capabilities. Powered by McLaren’s race-derived twin-turbocharged and intercooled DOHC V-8 engine, the 675LT Spider was produced in a limited run of 500 examples.

This stunning example is finished in Special MSO (McLaren Special Operations) Bourbon paint and also complemented by Carbon Black upholstery. According to RM Sotheby’s, this 675LT Spider is equipped with over $23,000 in MSO options. This  including carbon fiber wipers and mirror arm. In addition, it features comprehensive exterior and interior carbon-fiber upgrade packages costing $10,690 and $6,270, respectively. Use has been limited to delivery miles, stated at just 60 at time of cataloguing. The collector-car auction market is experiencing a surge in interest in these amazing McLaren vehicles, providing an exciting market segment that will only continue to grow. 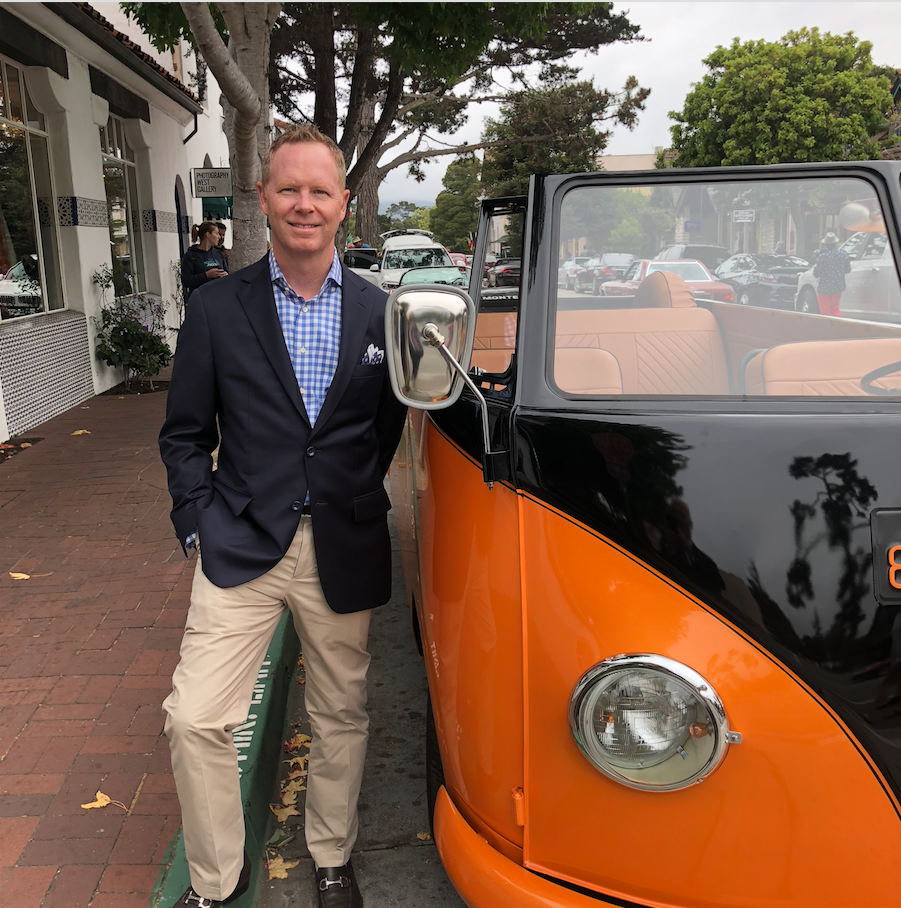 The Simple Lease from Premier Financial Services takes the stress out of bidding at auction. In fact, Premier is your best path to owing any high-end automobile, from leasing a classic Ferrari from auction to driving a modern Supercar home from the dealer. Preparation is key to getting the car of your dreams, so check out the comprehensive resources we have provided on the Premier Financial Services website and be sure to contact us today. Representatives from the Premier Financial Services team of vehicle-leasing experts will be in attendance at the RM Sotheby’s Amelia Island auction, ready to assist existing and new clients while monitoring collector-car sale prices there. Be sure to contact us now to prepare to bid at Amelia Island with confidence and experience our great service and expert advice first-hand.