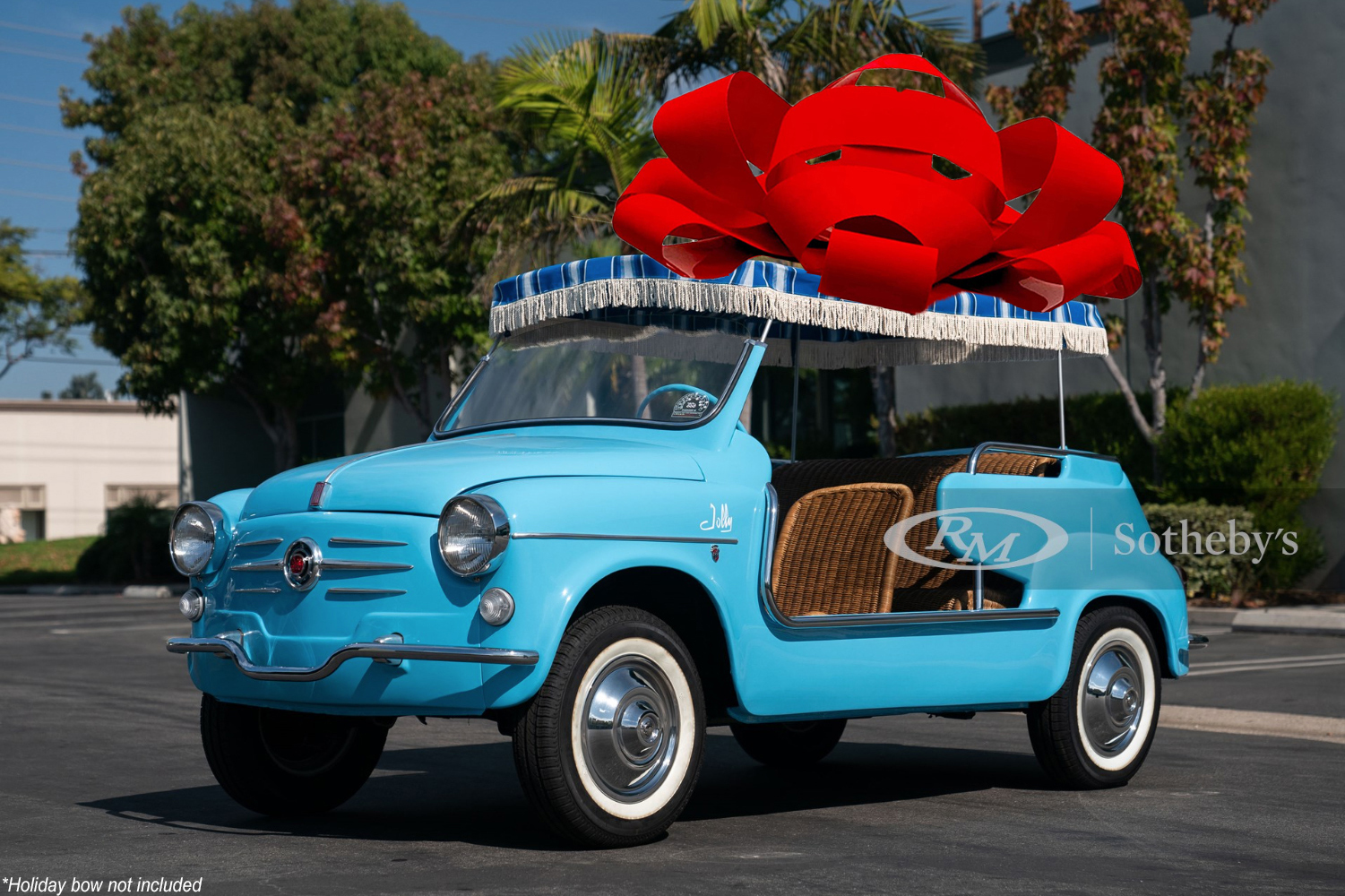 ’Tis the season to think of beach cars

What do you get the car collector who has everything? It’s never too late to be thinking about a little car for the beach, especially one that was designed for it.

Looking like an escaped amusement-park ride, the tiny Fiat Jolly is a road-legal car with an owner list that has included U.S. President Lyndon Johnson and renowned car collector Wayne Carini – not at the same time, of course. Although a beautifully restored ’59 Jolly failed to sell at the RM Sotheby’s Open Roads auction this past November, the auction house has sold numerous versions in the past. This includes a lovely coral-colored ’62 model at its 2020 Amelia Island sale for $151,200.

That was a bit above the $144,000 that Hagerty estimates for a “concours” condition Jolly. This works out to about $14,000 per foot if priced by length.

With its roly-poly form, doorless sides, surrey top, wicker seats and pastel color palette, the Fiat Jolly looks like its name. You can’t help but smile or even giggle when you see one. These days, that’s most likely occur at a major auto auction. However, the Jolly’s original habitat included tony seaside locales around the world.

Made from 1958-1966, the Jolly began as an industrial titan’s whim. The first one was made by Carrozzeria Ghia for Gianni Agnelli, the grandson of Fiat founder Giovanni Agnelli, as a custom land tender for his yacht. The younger Agnelli was known as “the Rake of the Riviera” for his trend-setting fashion sense. While he was usually seen driving a custom-built Ferrari, it was the Jolly that made his yacht-owning friends jealous.

Ghia started making the Jolly for customers in 1958, based on the impossibly small and slow two-cylinder Fiat 500. Later models were based on the slightly larger and slightly less slow Fiat 600. The Fiat 600 had a 28 horsepower 633cc 4-cylinder engine. This model sold for about $1,900 in the U.S. in 1960. It was basically a hand-made car, hence a price that would have bought a Plymouth Valiant.

In the late 1960s, designer Giovanni Michelotti revived the Jolly concept for the Spiaggetta (also known as the Shellette), building about 80 of these Fiat 850-based beach cars. A 1970 model sold for $109,200 at the RM Sothebys Elkhart Collection sale last October.

A natural conversation starter and guaranteed merry maker, the Fiat Jolly might be the one toy you don’t stop playing with after a few weeks.