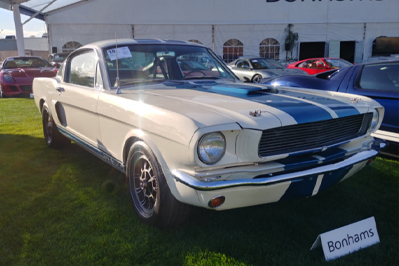 Bonhams returns to the Westin Kierland Resort for the eighth year in a row, bringing with it the usual array of pristine classics and untouched exotics. Last year saw over 25 million dollars change hands in just a few hours, with an impressive sell-through rate of 87%. This year, Bonhams plans to best those numbers with two-thirds of their 120 car docket offered at no reserve. Some of the highlights include an ex-Stirling Moss Jaguar and a Lamborghini Miura SV.

Our team of leasing experts will be on top of the action to assist their clients and watch for trends in the collector car market. Here are a few of the cars they’re watching.

Lot 109‘s Alfa Romeo Giulietta Spider has caught the attention of Northeast Sales Manager Keith Neelans. The Giulietta Spider Veloce’s nimble performance and Pininfarina design helped establish Alfa Romeo’s reputation as a maker of fine sports cars, as well as race cars. Coaxing 103bhp out of a 1.4 liter inline four was no small feat in 1960, requiring twin Weber carburetors and a higher compression ratio than the base model. Benefiting from a recent restoration and presented in factory-correct Grigio Grafite over Red Elvezio, this spider shows as well as it goes.

West Coast Sales Manager Juan Garcia has his eye on Bonham’s 1991 Porsche 911 Turbo. Located at Lot 13, this largely original, matching-numbers Turbo is one of only 674 shipped to the US. The 964 benefited from many advancements first seen on the world-beating 959 supercar, including four-wheel drive. Though approaching its 30th year, this Porsche‘s 320bhp flat-six, anti-lock brakes, and power-assisted steering make it more than a match for many modern sports cars.

Premier’s Sales Manager for the Southeast, Chris Warren, has chosen Lot 26’s 1970 Ferrari 365 GT. The 365 GT was the evolution of the marque‘s first four-seater, the 250 GTE, that combined race-bred engineering with smoother, more practical road manners. A high-revving V12 and 4-wheel independent suspension made it a Ferrari on fresh tarmac. Hydro-pneumatic shocks at the rear kept drivers sane on potholed city streets.

Michelle Yancey, our Southwest Sales Manager, has a good feeling about the 1989 Porsche 911 Speedster at Lot 8. Harking back to the acclaimed 356 Speedster, the 911 Speedster is light, quick, and offers only modest weather protection. This automobile has seen less than 3800 miles in its lifetime and still wears the stunning Titanium Silver livery it left the factory with in 1989. These soft-tops saw only one year of production, and in very limited numbers; we may never see a better preserved example come to auction.

Premier’s Corporate Headquarters in Woodbury, Connecticut will be watching the bidding on Lot 64’s 1993 Bugatti EB110. As the first Bugatti in over forty years, the EB110 had some big shoes to fill. It rose to the occasion with the world’s first carbon chassis in a production car. A four-wheel drive system made good use of the 552bhp generated by the its 60-valve quad-turbo V12. Only 139 of these marvels were produced before the company folded in 1994.

A Simple Lease from Premier Financial Services takes the stress out of bidding at auction. Premier is your path to any high-end automobile, from leasing a rare tuning-house Porsche from auction to driving home that Lamborghini from the dealer. Bidders are determined at Bonham’s Scottsdale Auction, so avoid a costly mistake with our auction basics.