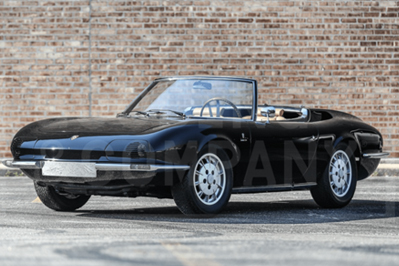 A One-off Emerges After 25 Years.

One could guess that, when Porsche designed the original 911, there was no thought among the company staff that its shape would outlast many of them. But sports car buffs the world over had different ideas. The 911 design, while modernizing themes seen in the 356, struck a chord for timelessness. This cannot be explained by purely cerebral analysis.

That might explain why, even when an Italian designer created a striking one-off version of the 911, Porsche customers were largely unmoved. The singular car, designed and built by Bertone with approval from Porsche, will be offered at Gooding & Company’s Monterey auction this month. It is up for auction with a pre-sale estimate of $700k-$1m.

It Never Rains in California

After launching the 911, Porsche continued the 356 until 1965. The 356 remained the only way to get an open model from the marque for a time. In Southern California, racer John von Neumann’s Competition Motors had become a Porsche dealer of repute. Soon, he knew well the demand for an open 911. He decided to try something on his own.

Von Neumann carried clout with the factory, having been instrumental in promoting the marque via his own successful racing in the 1950s. He had also teamed with auto distributor Max Hoffman to convince Porsche to build the stripped-down, lower-priced 356 Speedster.

When von Neumann approached Italian car designer Nuccio Bertone, who had expressed interest in trying a 911 design, Porsche made a bare 911 chassis available for the project. Even though von Neumann funded the project from his own pocket, Porsche retained veto power over any possibility of production.

While honoring Porsche’s engineering and the 911’s chassis layout, Bertone managed to produce a rather striking two-seat Spyder. It came with the Italian flavor expected from the designer.

There’s no doubt that the 911’s rear engine presented a challenge. However, Bertone had, at the time, already navigated that path when it created the diminutive rear-engine Fiat 850 Spider. Later, it would also produce then 850 Spider. The little, 49-horsepower rear-engine Fiat debuted at the 1965 Geneva Auto Show.

Bertone’s 911 Spyder is finished in Carmine Red over a cream-colored interior and shod with Campagnolo wheels. It was presented at the 1966 Geneva Auto Show, along with Porsche’s own 911 Targa.

Viewed in profile, or from a high ¾ rear angle, the Porsche 911 Spyder shows an unmistakable resemblance to the Fiat. One can also see some similarities to Bertone’s 1963 Iso Grifo and Chevy Corvair Testudo concept car.

To accommodate the Porsche’s engine location into the design, the Bertone 911 Spyder has a raised rear section inboard of the low, curvy fender tops. This clever solution is most easily seen in a close ¾ rear view. The considerable rear overhang gives away the engine location, and from some angles, the car appears rear-heavy.

The attractive Porsche Bertone 911 Spyder’s design was quite un-Porsche. Its lavish leather interior, as well, departed from 911’s design and featured unique seats, a center console, and main instrumentation laid out vertically down a central stack.

Though the 911 Spyder was warmly received at Geneva, there was no call for copies. Meanwhile, Porsche’s 911 Targa, fetaures a removable roof panel, stainless steel roof hoop and zippered plastic rear window. This generated much excitement, and even von Neumann conceded it was what the market needed.

Von Neumann kept the Bertone 911 Spyder for a number of years. A later owner had the Spyder refinished in its current black over beige leather livery and displayed it at the Pebble Beach Concours d’Elegance® in 1989, where Nuccio Bertone was honored.

The current owner acquired this unique Porsche 911 25 years ago. Further, it has essentially been on long-term static display in climate-controlled storage. Porsche specialist Motion Products of Neenah, Wisconsin returned the car to running condition. However, but Gooding & Company notes that it will require further mechanical attention.

Truly one of a kind, the 1966 911 Spyder presents the opportunity to own a piece of both Porsche and Bertone history.