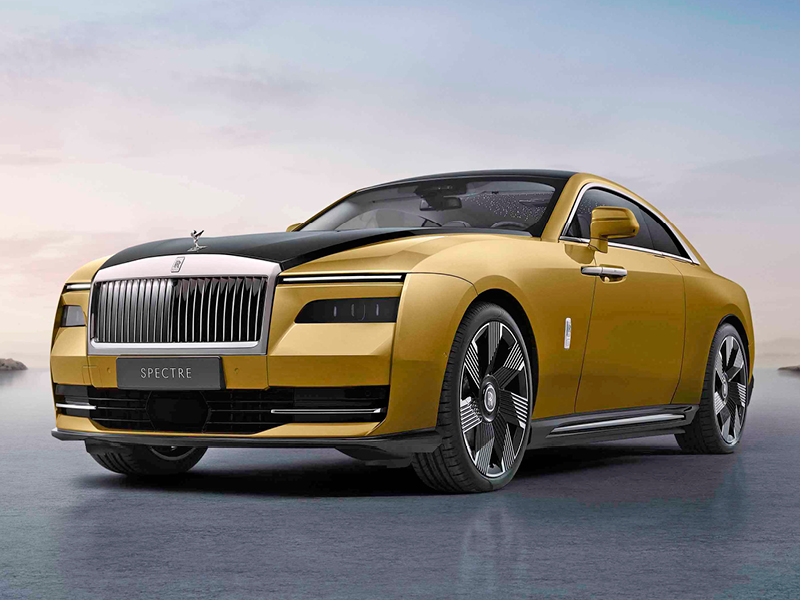 Has it really been 10 years since Rolls-Royce revealed its 102EX experimental electric car based on the Phantom sedan? No, it’s been 11 years and eight months. But you can forget about the 102EX and instead focus on the first production EV from this great marque, the Spectre.

But this new battery-powered Roller is no apparition, nor is it a science project or corporate ego trip. The Spectre will arrive in late 2023, and Rolls says it will offer only electric-powered vehicles by 2030. The company expects the Spectre’s price to fall between the $351,000 Cullinan and the $460,000 Phantom VIII. Math suggests that would be about $405,000 (to start, that is).

Back to the Future

Auto historians will note that Rolls-Royce began in 1906, a time when electric propulsion was competing with internal combustion for automotive prevalence. None other than Charles Stewart Rolls thought, at least for a short while, that EVs would be the future when he said:

“The electric car is perfectly noiseless and clean. There is no smell or vibration. They should become very useful when fixed charging stations can be arranged.”

Mr. Rolls said that, though, six years before joining with Henry Royce to build gas-fueled automobiles. He was right about the benefits of EVs, though, as well as the issue on which their success will heavily depend today.

Shape of Rollers to Come

The Spectre’s shape and general design theme recall the recent Ghost-based Wraith coupe, with a somewhat more cohesive rendition of its fastback profile. It may not be as sexy as the classic Maserati Ghibli’s fastback design, but functionally, it provides ample headroom for rear seat passengers.

That profile also helps make the Spectre the most aerodynamic vehicle ever from Rolls, which claims an ultra-low 0.25 coefficient of drag. It’s probably a safe bet that the Spectre’s design foreshadows even sleeker Rolls EVs to come. Just as with gas vehicles, a slippery shape reduces energy usage, thereby extending range.

The rest of the design is unmistakably Rolls, including the rearward-opening “coach doors.” But the Spectre conveys a sporty air thanks to the lower, wider grille than you’re accustomed to seeing from the automaker. The headlight treatment is a highlight, indeed. The thin strips along the edge of the hood are LED daytime running lamps, while the darker rectangular spots below are the smoked lenses of the headlights.

The Spectre is based on the automaker’s “Architecture of Luxury” aluminum construction, which also forms the foundation for the Ghost, Cullinan, and Phantom VIII. The Spectre is a large car with a presence that demands attention. Its 126-inch wheelbase is four inches longer than the Wraith’s and four shorter than the previous Phantom coupe’s.

The Spectre stretches 215 inches from bumper to bumper and weighs about 6,600 pounds. The battery pack accounts for more than 1,500 of that, according to Rolls. Mounting the battery pack low contributes to a lower center of gravity, and Rolls says it also functions as a thick layer of sound insulation.

While Rolls has not published its capacity, the company estimates range at about 260 miles on a charge. (The higher 320-mile figure you might have seen is based on the more optimistic European test cycle.) That should be plenty of range for ferrying owners to their private clubs and jets.

They’ll get there quickly, too. The Spectre’s front and rear motors combine to yield 577 horsepower and a massive 664 lb-ft of instantaneous torque and provide all-wheel drive. The dual-motor powertrain should propel the electric Rolls from 0-60 in 4.4 seconds.

Sure, that’s no Tesla Model S Plaid at 2.1 seconds, but then, does a Tesla surround you with the other-worldly ambience of the Starlight headliner Starlight door panels? Those features provide the perfect atmosphere to enjoy what Rolls describes as

“magic carpet ride” suspension. (Remember, it’s Mercedes, not Rolls, that’s been using the mushrooms … for the leather in their EVs, that is.)

The Spectre’s Planar suspension uses an array of cameras and sensors to “read” the road surface ahead and preemptively adjust the suspension, including disengaging and re-engaging the stabilizer bars on the go.

Speaking of going, Rolls says orders are already coming in for the Spectre, which will appear to customers in the fourth quarter of 2023. The company estimates that before the Spectre’s first full year is out, it will account for a fifth of the company’s sales. Better get rolling if you want to be one of the 20 percent.