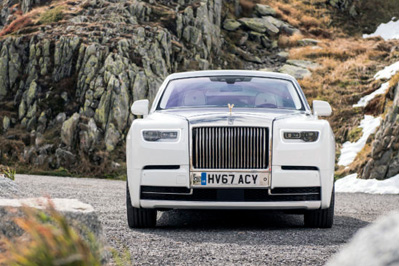 Not the same old song.

In 1967, John Lennon disturbed more than a few Roll-Royce owners when he had his Phantom V painted like a Gypsy wagon. Fifty years later, Rolls-Royce borrowed that very car from the Royal British Columbia Museum in Victoria, British Columbia, Canada for a display of the “Great Eight Phantoms” at the Bonhams flagship gallery in London. The event was part of the marque’s launch festivities for the new Phantom VIII. What was once counterculture was now, well, just culture.

The new Phantom VIII succeeds the Phantom VII, which, when it was introduced in 2003, lacked the numerical suffix. But hear ye, hear ye, all royal subjects shall from this moment forward refer to the previous Phantom as the Phantom VII.

Rolls-Royce has been using the Phantom name since 1925, although not continuously. The name was in later years reserved for the factory limos, until the first new Rolls created under the BMW umbrella arrived in 2003 and took on the name. That car went through a Series 2 update, but again, we are now calling that car the Phantom VII.

The Phantom VIII debuts the marque’s new aluminum spaceframe platform, which Rolls officially calls Architecture of Luxury. (You shall NOT refer to it as “AOL.”) Fear not, aluminum notwithstanding, there’s still nearly three tons of Rolls-Royce heft here, suspended by advanced air springs and adaptive damping, to snuff out the bumps. Rolls says that the new architecture also makes it easier to build special, limited-run models.

Outside, the Phantom VIII shows an evolutionary look. After all, Rolls nearly perfected “over the top” with the previous Phantom, so why mess with success? It’s a bit curvier here and there, but that front end is still the most imposing visage this side of the 1960 Peterbilt that terrorized Dennis Weaver in the 1971 TV thriller, “Duel.”

Rolls will offer two wheelbases, the “extended” model adding 8.6 inches behind the front doors for the benefit of rear seat passengers. One still enters the rear seat via “coach door,” which is Rolls lingo for rear-hinged door. Car buffs overheard calling them “suicide doors” at auto shows will be escorted away.)

Power to the People

Power for the Phantom VIII comes from a new version of the Ghost’s twin-turbo 6.6-liter V-12, oozing out 563 horsepower and 664 lb-ft of torque. Remember the days of Rolls-Royce merely citing power as “adequate?” This is really, really adequate. The engine is teamed to an eight-speed automatic with nary a paddle shifter in sight. The Phantom can whisk you from 0-60 in just 5.1 seconds.

Cabin luxury is simply beyond compare. Up front, the Phantom VIII offers you “The Gallery.” This glass panel spans the width of the dashboard, and behind it, owners can commission their own artworks to be placed behind it. Rolls apparently has a network of artists in mind, but we could imagine some customers wishing to put their own doodles on display. Yes, there’s an instrument panel and multimedia screen behind the glass, too.

In the cavernous rear seat area, classic Rolls details include traditional wooden picnic tables for the rear seats, while the latest tech includes multimedia display screens that deploy from the rear seatbacks, above the tables.

In its preview drive, Car & Driver called the Phantom VIII “freakishly quiet,” citing Rolls-Royce’s claim of a 5-decibel reduction in interior “noise” over the previous model. That equates to a 75-percent reduction, which sounds a bit like making water wetter.

Similar to the Mercedes-Benz S-Class, the new Phantom VIII features a road scanning system that identifies bumps before the car reaches them and adjusts the adaptive electronic dampers in advance. Also working beneath you, active anti-roll bars use electric motors to mitigate lean when cornering.

As Car & Driver concluded: “If anyone offers you the choice of one car for the rest of your life, make it a Phantom. It might be possible to build a better luxury car than this, but don’t expect to see one any time soon.”

Forbes concurred, calling the new Phantom VIII “the finest automobile on earth, sorted, sifted and smoothed to details within details within details, every function, texture, input, sensation and color reassuring that this is not just a car, but a wonder of human achievement, countless man-years invested.”

Phantom VIII Pricing has not yet been announced, but $450,000 would be a good estimate. Personalization starts from there.