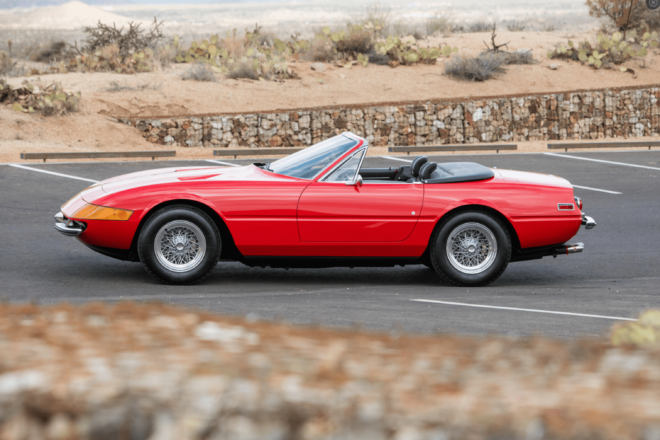 Even when Lamborghini defined the new supercar genre with its mid-engine Miura in the late 1960s, Ferrari once more stuck with the front-engine berlinetta for its performance flagship. The successor to the 275 GTB/4, the 365 GTB/4 was the Ferrari V12 berlinetta formula taken to its zenith. The car’s “Daytona” nickname, inspired by the Ferrari 330P4’s 1-2-3 sweep of the 24 Hours of Daytona in 1967, would become unofficially official.

For those who define “ultimate” as “open,” Ferrari had another surprise. In 1969, Maranello showed the Daytona Spider, and ultra-limited production began two years later. The Daytona Spider was, in the manner of the 250 California Spider, a no-compromise sports car. Coachbuilder Scaglietti would turn out just 122 of these masterpieces through 1973.

At its Scottsdale auction, Bonham’s is offering an outstanding example of the breed. A 1972 model, this Daytona Spider was fully restored in the 1990s. An award winner at multiple events, the Daytona is also Classiche certified by Ferrari. The pre-sale estimate is $2.4-$2.8m. 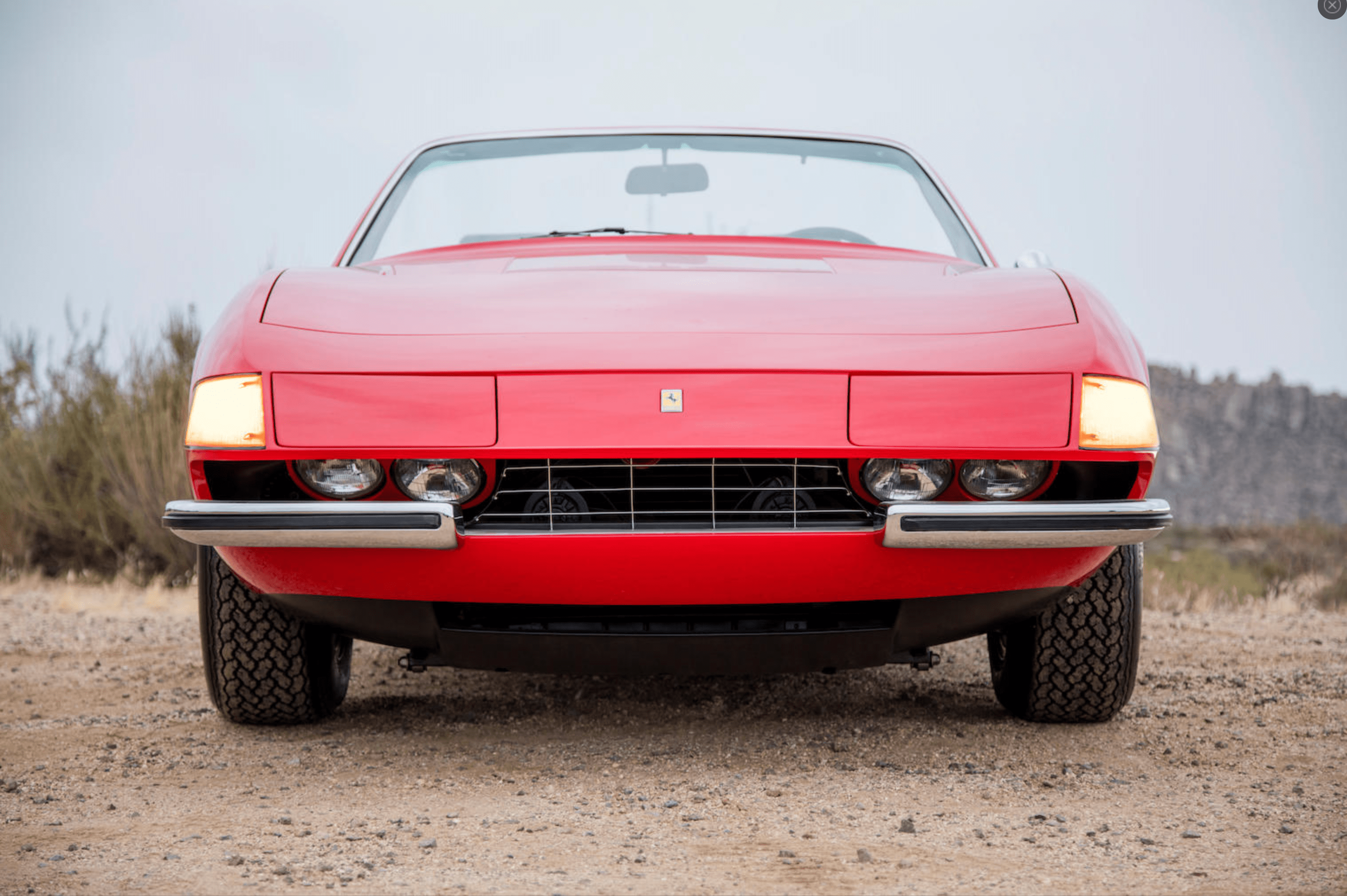 When Ferrari demarcated the coupe and roadster roles in its 275 series in the 1960s, the roadster, the GTS, did not share the berlinetta’s design, and its engine had a softer tune than the coupe’s. There was nothing for the buyer who wanted the ultimate open performance car, and so American Ferrari distributor Luigi Chinetti commissioned construction of a 10 275 GTB/4 N.A.R.T. Spiders, named for Chinetti’s North American Racing Team). Steve McQueen owned one.

Ferrari would fill that model niche with the Daytona. Penned by Leonardo Fioravanti for Pininfarina, the Daytona was the marque’s ultimate expression of muscular elegance. The car lost none of the muscularity when it lost its roof. 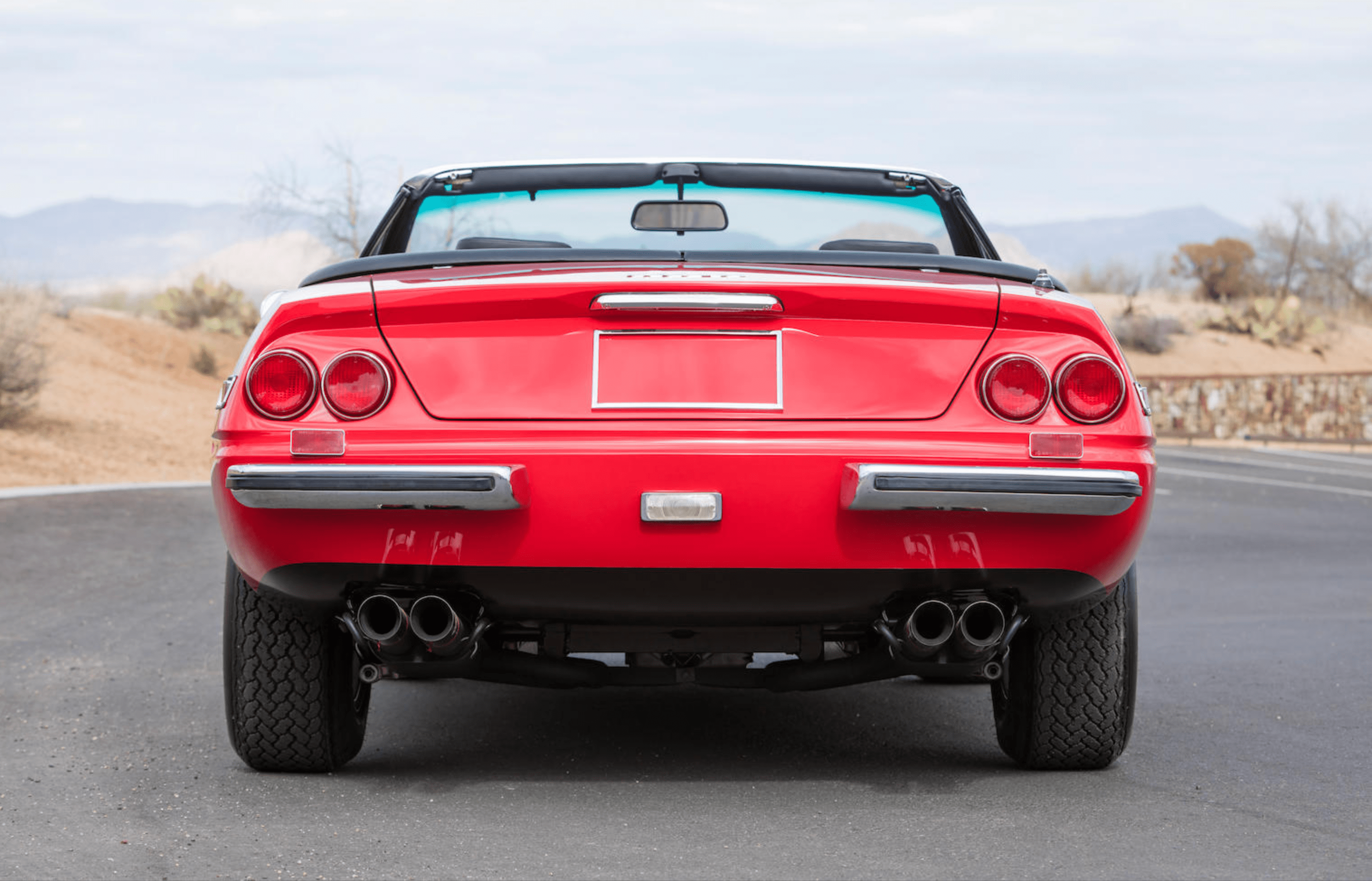 Ferrari Perfects Its Own Invention

Perhaps the reason the Daytona was such a great driver’s car was that Ferrari had perfected its own formula. The chassis followed long-standing Ferrari practice, using oval-section steel tubing, and also adopted independent wishbone suspension, as on the 275 GTB/4. Power brakes were standard, but power steering was not available.

The V12, which had grown to 4.4-liters in the 1967 365 2+2 models, was boosted in the Daytona by use of six Weber 2-barrel carburetors in place of the trio on the other 365 models. The U.S. spec Daytona gave 342 horsepower and 314 lb-ft of torque, barely down from the higher-compression Euro model. 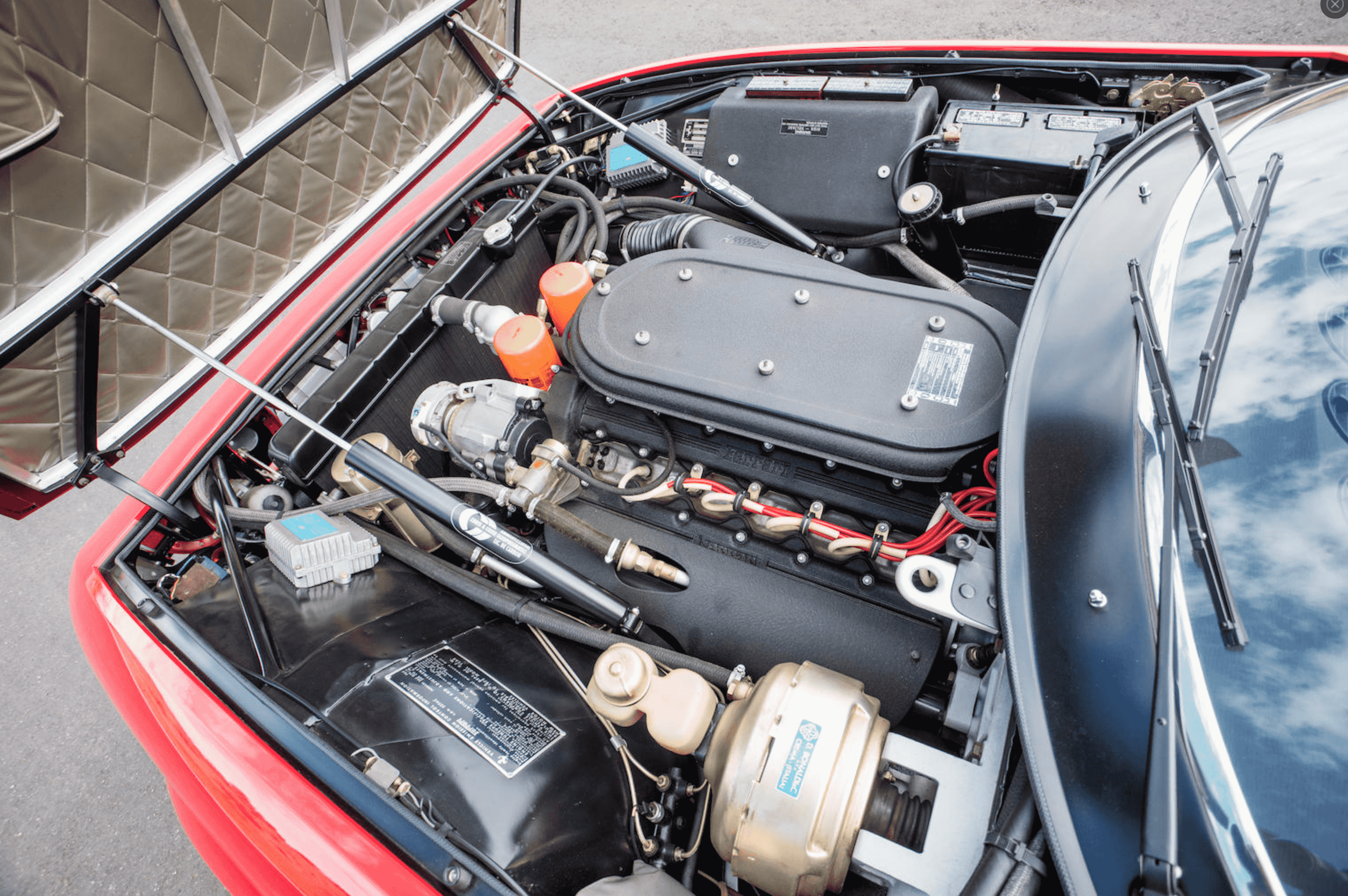 Dry-sump lubrication enabled a low engine installation. The 5-speed manual transmission was rear-mounted as a transaxle to yield 50:50 weight distribution.

The Daytona was incredibly fast for its day, with 0-60 in just over five seconds and a top speed exceeding 170 mph. More than that, the Daytona could maintain high speeds for long periods. Auto journalist Brock Yates and racer Dan Gurney proved as much when they drove a Daytona coupe from New York City to Redondo Beach, Calif. in 36 hours in the 1971 running of the Cannonball Baker Sea-to-Shining-Sea Memorial Trophy Dash. At one point, Gurney held the Daytona at 7,100 rpm in fifth gear (about 170 mph) for 20 miles.

Ferrari built just over 1,400 Daytonas, including 122 Spiders and 15 competition berlinettas. (The Spider production number is sometimes given as 123.) Ferrari expert Michael Sheehan, writing in a 2005 issue of Sports Car Market, estimates that at least 100 Daytona coupes were converted into Spiders in the late 1970s, when it was economically feasible and profitable to do so. His own shop did nearly 30, while his neighbor, Richard Straman, did about three dozen. 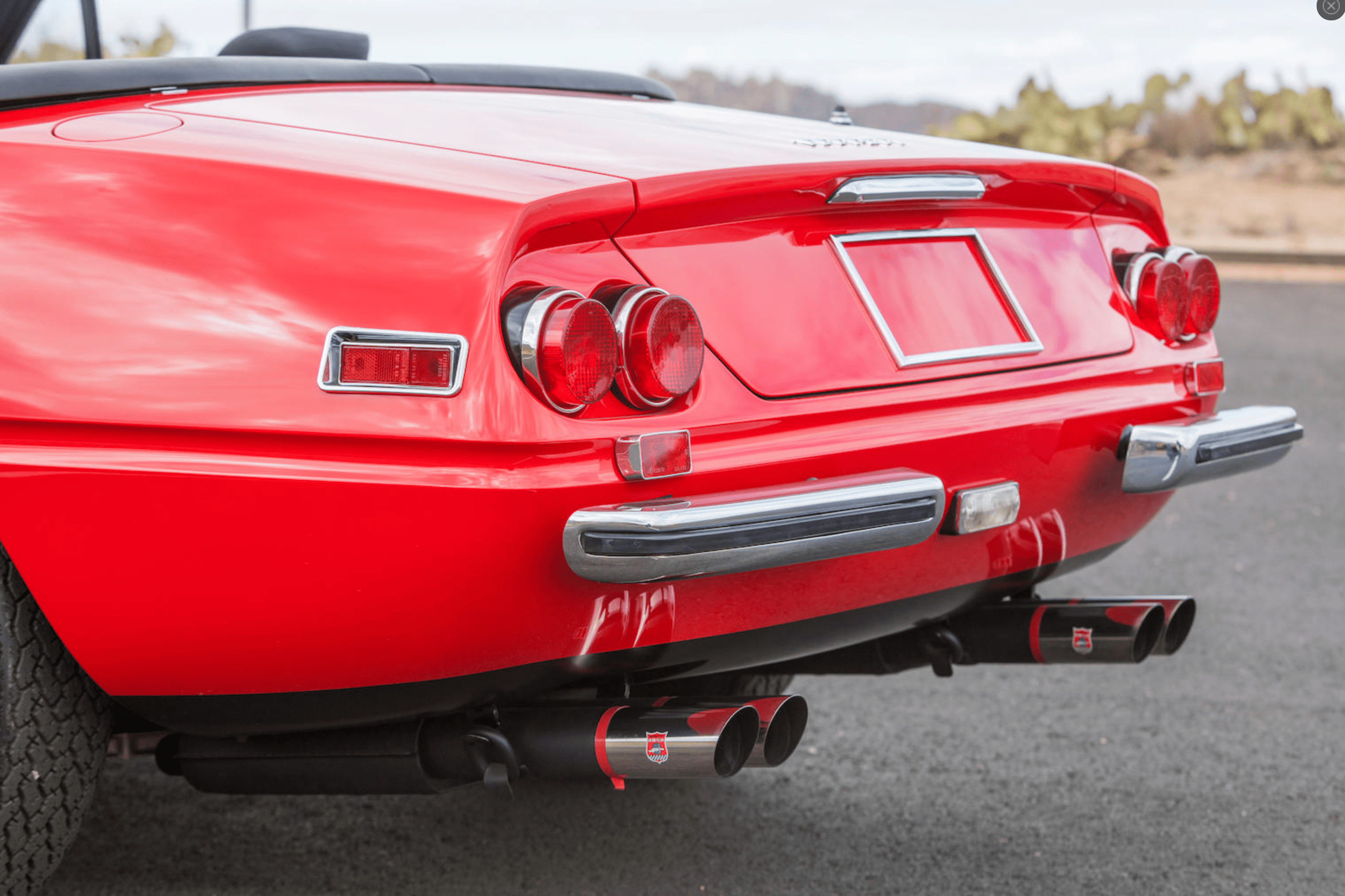 The 1972 Daytona Spider offered by Bonhams, painted Rosso Chiaro red, was the 72nd built and was delivered in fall of that year through Hollywood Sports Cars. It was equipped with optional air conditioning. The car was resold early in 1973 with 6,600 miles on the odometer.

In 1992, the car was stolen from a subsequent owner, but recovered two years later. Its next owner commissioned a complete restoration by Junior’s House of Color in Bell Gardens, Calif. The original, matching-numbers engine and transaxle were refurbished by Norbert Hofer’s Gran Touring Classics. The Daytona Spider won the Platinum Award at the 2002 Ferrari Club of America National meet in Los Angeles.

What better way to drive this masterpiece than to lease it through Premier Financial Services?