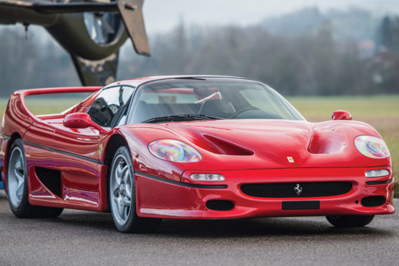 One can imagine the challenge put before Ferrari engineers after the last F40 supercar was built in 1992. They knew they’d have to top it for the 50th anniversary Ferrari. Did the F50 do it?

Conceived as a kind of Formula 1 car for the road, the F50 shared nothing but its engine location with the F40. The two cars are a study in stark contrasts, which must be considered to Ferrari’s credit. The marque has never been one to rehash its greatest hits.

A Different Approach to Ultimate

If the Ferrari F40 was ushering in a new era of turbocharged V8 road cars, it was going to be a long wait. As in 30 years. For the F50, Ferrari went back to a naturally aspirated V12, one derived from Ferrari’s 1990 Formula One racecar and the 333 SP sports racer, the latter highly successful with private teams from 1993-1998.

One glance into the sparsely appointed cockpit, and you see it – sprouting from the carbon-fiber center tunnel is Ferrari’s trademark gated shifter to control the six-speed manual transmission. The F50 would be the last Ferrari supercar so equipped.

Sports Racer for the Road

The entire F50 is built like a sports racer. The central tub is made from carbon fiber, while the body uses a carbon fiber, Kevlar and Nomex honeycomb. As in an F1 car, the engine, transmission and differential are mounted as a structural unit to which the suspension, elements of the composite body and even the rear bumper are attached.

Two decades later, the Pininfarina-designed F50 is still a stunner, a coupe-roadster with a removable roof panel and a huge, integrated rear wing that rose from the car’s curvy flanks. It was beauty blended with the kind of brutishness that arises from function-first design.

While it may be luxurious compared to the F40 interior, the F50’s cabin has a sports car purity refreshingly devoid of today’s infotainment touch screens. There’s plenty of carbon fiber, but also crank windows. There’s no manettino knob on the steering wheel, but rather just a small knob behind the shifter to select the mode for the electronically controlled suspension damping.

Raising the engine cover reveals the racecar nature of the chassis. Springs and dampers are mounted horizontally and operated via pushrods by the control arms. There’s a similar setup in front. The mid-engine layout puts 57 percent of the car’s mass on the rear wheels, and so to prevent the F50 from becoming a drift machine through every curve, Ferrari made the front track 20mm wider than the rear. There is no ABS braking.

Hard to Get, Harder to Test

In an unusual move designed to prevent owners from reselling their F50s quickly, as happened with the F40, Ferrari spread the car’s half-million dollar price over a two-year leasing arrangement. The terms were quite unlike those offered to exotic and collector car customers from Premier Financial Services and others in the industry; they were designed by Ferrari to hold some influence over owners’ usage of the cars. Car & Driver magazine revealed that much when it spent more than a year contacting 11 F50 lessees, all of whom initially agreed to let their cars be tested but then one by one went silent – under pressure from Ferrari, they told the magazine.

Finally, Car & Driver found the one F50 driver who already owned his car outright. That is entrepreneur and race driver Andy Evans, an elite Maranello client. One of the 333 SP’s he campaigned in IMSA helped net Ferrari the constructor’s championship in 1995.

With Evans doing the driving, the F50 tested out a bit slower than the F40, “slower” of course being a relative term. The F50 touched 194 mph, registered .95 on the skidpad and scorched the quarter-mile in 12.1 seconds at 123 mph.

The F50 today remains difficult to acquire, but only for its rarity rather than any control exercised by Ferrari. At Monterey in 2015, RM Sotheby’s sold an F50 for just under $2m. The auction house sold a 1997 F50 at its Paris auction this past February for just under 1.3 million euros. A 1996 F50 consigned to its London auction for this September has a pre-sale estimate of 1.2 million pounds.