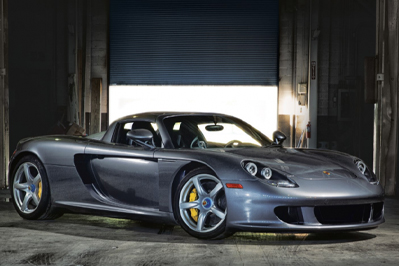 In the past two decades, RM Sotheby’s has sold thousands of collectible cars alongside the Amelia Island Concours d’Elegance. This year, the old-timer is bringing a 10-car collection of “youngtimers“: the budding classics of the 80s, 90s, and early noughties. The veteran auction house’s docket for Amelia Island includes a pristine Ferrari Daytona and a prewar Bugatti Type 51 Grand Prix.

Our team of leasing experts will be following the bidding closely to assist their clients and watch for changes in collector car valuation. Here are a few of the cars they’re watching.

Premier’s Midwest Sales Manager, Ross Dressel, is a fan of the 2008 Alfa Romeo 8C at Lot 128. The 8C Competizione was the first Alfa sold in the United States since the company fled the market in the 90s. Its sonorous V8, near perfect weight distribution, and striking styling reminded the country of what they had been missing. This example is one of only 84 US-spec 8Cs. It is one of only four finished in Rosso Competizione and red-braided leather.

Michelle Yancey, our Southwest Sales Manager, has her eye on the 1965 Shelby Cobra at Lot 264. The Cobra’s combination of a light, European body with a big-block American V8 greatly outpaced its competition and built upon the legacy of the 289 Cobra. The example on sale is as original as possible, with less than 2,000 miles on the odometer and still wearing the tires it was sold with.

Premier’s Southeast Sales Manager, Chris Warren, will be watching the bidding on Lot 130’s Lexus LFA. To commemorate the successes of LFA-derived racecars at the Nurburgring, Lexus set about improving on what was, already, an icon of Toyota engineering and design philosophy. This highly desirable package includes downforce-generating carbon fiber wings and a slight increase in power to compensate for the drag. It features a faster shifting transmission and lowered ride-height. In addition, a set of ultralight magnesium wheels further specializes the Japanese supercar for the track.

Lot 251‘s 1962 Porsche 356B has attracted the attention of our Sales Manager for the West Coast, Juan Garcia. The 356 Roadster was the final iteration of the vaunted Speedster, capable of reaching 115mph in “Super 90” spec. Highly optioned roadsters like the one on offer reclaimed many creature comforts while remaining as light as possible. The previous owner of this 356B made subtle modifications to the car. This includes sound insulation and more modern headlamps, greatly improving its vintage rallying potential.

Lot 244‘s Maserati 3500 is a favorite of Keith Neelans, our Northeast Sales Manager, for its understated Vignale coachwork. With a 235bhp, mechanically fuel injected six-cylinder underneath super light Italian bodywork, the 3500 GTi was one of Maserati‘s most popular road cars. In 2005, marque experts in Modena treated this vehicle to a bare-metal rotisserie restoration. Since then, the car has been dutifully maintained by the consignor, including a refresh of the Connolly leather interior.

Premier’s corporate headquarters in Woodbury, Connecticut is watching the 1999 Bentley Continental SC at Lot 115. The Continental R of the early 90s was Bentley’s first step out from under the shadow of Rolls Royce. The SC, or Sedanca Coupe, was one of the final developments of the model line. It benefited from a removable sunroof and styling refresh. Though generously appointed in leather and burl, and tipping the scales at over 2.5 tons, the Continental’s 400bhp V8 could accelerate to 155 mph.

A Simple Lease from Premier Financial Services takes the stress out of bidding at auction. Premier is your path to any high-end automobile, from leasing a Ferrari from auction to driving it home from the dealer. The stakes are high at RM Sotheby’s Amelia Island Auction, so be sure to study up on our auction basics.