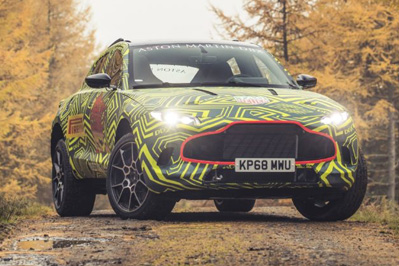 A tiny, personal aircraft looking fresh out of the 22ndcentury swoops out of the sky, hovers and then gently lands like a helicopter behind a huge mansion. The clear canopy pops up, and a couple, dressed in formal wear, exit the unusual machine and sprint to a sleek SUV, then roar away. The vehicle snakes along twisty mountain roads before descending toward a private marina, where the two exit and then climb aboard a tiny submarine.

Before disappearing beneath the waves, the sub reveals a surprising brand on its tail: Aston Martin.

This could be the opening sequence for the next James Bond film. Or, it could be your life. When carmakers talk about “mobility,” they usually mean ride sharing and autonomous vehicle development. For Aston Martin, “mobility” could also mean flying or traveling under water. And if that happens to also meld with the James Bond imagery the marque cultivates, all the better.

Aston Martin’s SUV, called DBX, is arriving late next year. The company recently released the first official photos of the vehicle. Even though it was covered in camouflage (plus sponsorship decals), the distinctive shape comes through.

Aston Martin indicated that the photos showed the first DBX development prototype being tested in a demanding Welsh Rally stage, driven by the company’s Chief Engineer, Matt Becker. That the testing was begun in Wales, the company says, was a nod to Aston Martin’s new production facility in the Vale of Glamorgan. Perhaps Q by Aston Martin, the marque’s bespoke division, could whip up a Tom Jones signature edition.

Aston Martin says further DBX testing will take place in the world’s harshest environments, including the Arctic, Middle East deserts, high Alpine passes and of course, the Nürburgring Nordschleife. (They really ought to put Los Angeles and New York City traffic on that list.)

Aston Martin says such testing as needed to validate the DBX’s “all-purpose role,” which will include “impressive multi-terrain and towing capabilities as befits a state-of-the-art SUV.”

From Siberia, with Love

Will DBX drivers actually try to chase jacked-up Jeeps off road? Doesn’t matter. Porsche followed a similar pattern when it launched the Cayenne in 2002, bending over backward to emphasize its first SUV’s off-road chops. You might recall, too, that Porsche in 2010 issued a special edition called the Cayenne S Transsyberia to commemorate three consecutive victories in the Transsyberian Rally,a punishing 4,400-mile competition that goes through Russia, Siberia and Mongolia. If Aston Martin chooses to enter such a race with the DBX, perhaps the team could wear tuxedoes.

We All Live in an Aston Submarine

An Aston Martin submarine is real. Dubbed Project Neptune and developed in collaboration with Triton Submarines of Sebastian, Fla., it’s a three-person “submersible” that will be able to dive to depths of 1,640 feet. Top speed is a blistering 5 knots.

Project Neptune is essentially meant as a fun little ocean sightseeing vehicle that you launch from your mega yacht. Q by Aston Martin will offer customization and personalization options – perhaps an all-yellow paint job, but probably not missile launchers.

Flight of the Volante

A flying Aston Martin may be coming in the near future. Last July, the company revealed the Volante Vision Concept, a luxury concept aircraft with vertical takeoff and landing (VTOL) capabilities. It is being produced in partnership with Cranfield University, Cranfield Aerospace Solutions and Rolls-Royce. However, the concept aircraft aims to bring luxury personal transportation to the sky.

Aston Martin says the three-seat Volante Vision Concept previews a “flying autonomous hybrid-electric vehicle for urban and inter-city air travel”. So, apparently you won’t need a pilot’s license, just a heck of a lot of trust in technology.

Cranfield University, by the way, made some automotive hay (and nearly hit some hay bales) at the 2018 Goodwood Festival of Speed with a 1965 Mustang converted to autonomous driving. That one had some kinks to work out.

Branded submarines and airplanes sound like more fun than branded luggage, but there might be such a thing as too much James Bond imagery. Consider the fate of Seymour Goldfarb, Jr., an Aston Martin DB5 driver who became a bit too “bonded” to his movie screen idol. Heir to the Goldfarb Girdle fortune, poor Goldbarb succumbed to his own delusion that he was Roger Moore, not as an actor but rather as a man who thought he was an international jet-setting spy. The part is brilliant, by Roger Moore himself in the seminal 1981 film, “Cannonball Run.”