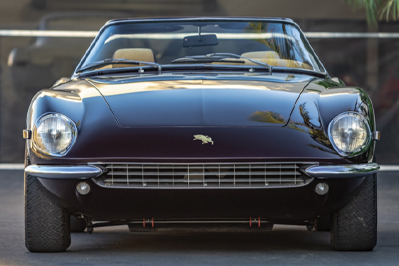 This “Hybrid” Was No Prius

Probably starting with brothers Alan and Richard Jensen building a custom body on a 1934 Ford chassis for actor Clark Gable, the idea of combining European coachwork with reliable American power has inspired many an entrepreneur. In addition to Jensen, the genre grew to include Allard, Cunningham, Facel Vega, Dual Ghia, AC/Shelby, Bristol, Iso, Monteverdi, de Tomaso and Intermeccanica.

From that group came remarkably fast and occasionally stunningly beautiful machines. The Intermeccanica Italia certainly fits both descriptors. Its connection to America includes not only the Ford powertrain, but also its designer. Like many of the Euro-American “hybrids,” as they were often called in the pre-Prius days, its production followed an occasionally bumpy road.

RM Sotheby’s is offering a fully restored 1972 Italia at its Petersen Museum auction on December 8, with a pre-sale estimate of $120k-$150k.

From Apollo to Griffith

Founded by Frank Reisner in Torino, Italy, Construzione Automobili Intermeccanica had in the 1960s made bodies for the Apollo GT, a Ferrari-influenced, Buick-powered coupe. Just 90 were made, with final assembly in the U.S.

The next project came with backing from Jack Griffith in New York, with a body based on sketches done by Robert Cumberford, a former General Motors Designer. (Cumberford had worked with Intermeccanica on a one-off 1965 Mustang sport wagon. He has long been the design writer for Automobile magazine.)

The resulting car, with a steel chassis designed by racecar engineer John Crosthwaite and coupe body refined by Franco Scaglione, was called the Griffith 600 GT. Just about a dozen or so were built, powered by the Dodge/Plymouth 4.5-liter (273 cu. in.) V8.

From Griffith to Italia

When Griffith’s operation folded, Steve Wilder took over and had the cars assembled by renowned racecar builder (and Ford’s defacto race shop) Holman-Moody in North Carolina. The steel-body car was renamed Omega, now powered by a high-performance Ford 289 cu. in. V8. Just 33 Omegas were made, all coupes.

Then, with Italian financial backing and new U.S. distribution, Intermeccanica refined the Omega, offering both a coupe and a convertible. The “new” car was first called Torino, then changed to Italia, as Ford owned the latter name in the U.S. Intermeccanica ramped up production, building a total of about 400 through 1972.

With all the production and legal legends out of the way, it’s time to talk about the car. One could say the Omega/Italia was influenced by Pininfarina’s Ferraris, but the Intermeccanica was crisper and seemed a bit more modern looking (at least in 1966) than, say, the 275 GTB. The Italia is an extreme example of long hood/short deck theme. The interior is impeccably finished.

Weighing well under 3,000 pounds, the Italia was certainly quick. Further, getting even more so when it switched to the performance-oriented 351 “Cleveland” in 1970. This is an engine also used by the de Tomaso Pantera. (Fun fact: the Pantera also was designed by an American, Tom Tjaarda.)

With a 4-speed manual transmission, the Italia could hustle from 0-60 in about six seconds. Handling quirks were sorted out with a later suspension revision, which the ’72 model on offer by RM Sotheby’s features.This car was also optioned with power windows and air conditioning. Finished in an elegant burgundy color complemented with a sumptuous burgundy leather and tan suede interior, this Italia is simply stunning.

End of an Era

The era of Euro-American hybrids began winding down in the 1970s. After Italia production concluded in 1972, Intermeccanica moved on to another stunner, the Opel-based Indra. Since 1980, Intermeccanica International, headed by Reisner’s son, Henry, and now located in Vancouver, Canada, has been building Porsche 356 replicas.