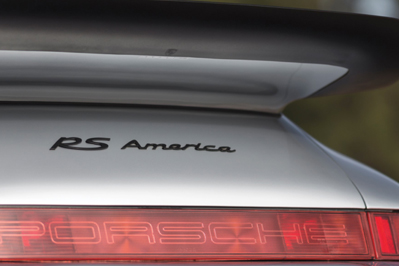 One for the Purists

In between, the 1993-1994 911 RS America was a stripped-down club racing special, and also the entry to the 911 line, priced at $54,000 — $10,000 less than the standard, more luxurious Carrera 2. The RS America was one for the purists, and just 701 were made. The upshot today: Hagerty shows an average value of $204,000 for an “excellent” condition RS America, or about four times the average value for an “excellent” condition Carrera 2 of the same vintage.

Getting It Right the Second Time

The 964-series 911 was a major leap in the evolution of Porsche’s iconic model, but some purists lamented the growth in “luxuries” like 8-speaker audio systems and even larger growth in price. In Europe, Porsche offered the uber-rare RS 3.8 in 1993 as a race homologation special. For the U.S. market only, Porsche sent the aptly named RS America.

The 911 RS America was similar in concept to the 1988 911 Club Sport, a stripped-down model with beefed up suspension for autocrossers, or customers who just wanted the lightest, best handling 911. The Club Sport, though, cost exactly the same as the standard Carrera at the time, so to some it felt like a bit of a cheat.

The RS America was Porsche’s way of making amends. Likewise, in a speech for the 1992 PCA Parade in San Diego, Fred Schwab, president and CEO of Porsche Cars North America, called the RS America “the car that the Porsche Club of America built.”

Stripped Down, to a Point

To make the RS America, Porsche essentially left out a bunch of stuff that was standard on the 1993 Porsche Carrera 2. This includes air conditioning, stereo, power steering, power mirrors, cruise control. The door armrests, near-useless rear seats and some sound insulation were deleted. Further, the interior door handles were replaced with simple (and quite nice) pull straps, and there were no door pockets. (How much can door pockets weigh?) Power windows were still used, though, because switching to crank-up windows would have required expensive re-certification.

The deletions didn’t remove much weight – 70 pounds according to Car & Driver, whose test car weighed an even 3,000 pounds.

The Carrera 2’s motorized, pop-up rear spoiler was replaced by a huge whale tail spoiler, which added downforce. The RS America came standard with the sport suspension package that was optional on the C2. In addition, it includes progressive coil springs, larger diameter front stabilizer bar and upgraded shock absorbers, plus brakes from the 911 Turbo and 17-inch Mille Miglia Cup 1 wheels (7-in. wide on front, 8-in.wide in back).

Putting Weight Back In

Also, you could add air conditioning back as an option for a ridiculously steep $2,805; AM/FM/cassette stereo for $986; limited-slip differential for $913 and power sunroof for $1,952. (There was also a 10-percent luxury tax on the car and all options at the time.) Interestingly, even if you didn’t spring for the stereo, the RS America came stereo-ready with two door speakers, windshield antenna, and associated wiring.

The RS America paint palette was limited to Guards Red, Black, or Grand Prix White. Further, there are two extra cost metallic colors, Midnight Blue and Polar Silver, available. Porsche would also paint-to-match a sample from the customer for another $2,500.

Regardless of exterior color, the RS America interior are black with fabric sports seats. Car & Driver said the high-bolstered seats made it harder to get in and out of the car. However, once seated, made it feel as though “the car seems strapped to your back.”

“The Essence of Porsche”

The RS America’s powertrain was stock Carrera 2, meaning an air-cooled 247-horsepower, 3.6-liter flat six. Car & Driver recorded 0-60 in 4.6 seconds and a 157-mph top speed. Magazine staffers were smitten with this minimalist Porsche. They are praising its handling, steering, braking – everything, concluding that it was “the essence of Porsche.”

The RS America was originally to be a one-year-only model, but of the 701 made, 84 were 1994 models, which by the way included the rear seats.