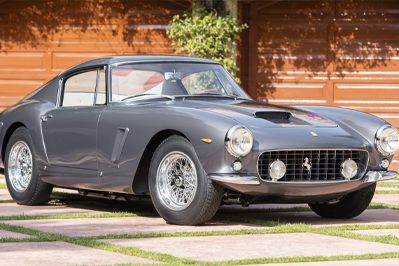 Is it even possible to choose one Ferrari that epitomized the marque in its classic era? Selecting a “top five” would be hard enough. Yet, when you consider that Ferrari road cars remained closely related to its GT racers for the first 15 years or so of the marque’s history, there is one that leaps forward: the 1959-1962 250 GT Berlinetta SWB.

The “SWB” initials stood for, simply enough, “short wheelbase.” The 250 GT SWB was one of the last variations of the prolific 250 GT bloodline, which began in 1952 and ended with the 250 GT Berlinetta Lusso a decade later. The 250 GT SWB exemplified the “gentleman racer” generation of Ferraris suitable for both road and track. Even today, you’ll find SWBs tearing up the track in vintage racing events.

At the Bonhams Monterey sale in August, one of the finest 250 SWB examples will be offered, one featured here a few years ago.

Click the image below to watch this 1962 Ferrari 250 GT SWB Berlinetta in action:

Brands today spend millions on data analytics to “get to know” their customers. Ferrari had a unique way of doing that, and to some extent still does. It does so by talking to them, either directly or through dealers. And so Ferrari knew exactly the kind of variations to build from its versatile 250 GT package.

The 1956 250 GT Competizione was one of many bull’s-eyes. Better known as the Tour de France for winning that grueling weeklong excursion through France’s racing circuits and hillclimbs numerous times, it was built on the a 102.3-inch wheelbase and was 173 inches long. Just 77 were built. A short-wheelbase version, known as the 250 GT Interim, gave Ferrari its fourth straight win at the Tour de France. Further, it also previewed what was coming next.

Seeing the need for a smaller, lighter model, Ferrari built the frame on a 94.5-inch wheelbase. This shrank the overall length by nearly 10 inches. The competition version, with an aluminum body, weighed under 2,200 pounds. The “lusso” or road version used a steel body and weighed 2,400 pounds. Accommodations were sparse, but the cabin was of course well finished. The 250 GT SWB was a car for purists.

The 250 GT SWB’s startling performance was not its only calling card. Pininfarina created a beautifully proportioned body that was almost dramatic in its simplicity. While some German designs hewed to the “form follows function” approach, the Italians found a way to deliver both in equilibrium.

The front end, with its characteristic Ferrari eggcrate grille, small chrome bumperettes and uncovered headlights, was utter simplicity. In profile, the rear overhang seemed a perfect counterbalance to the short front overhang.

Power for the 250 GT SWB came from the well proven Columbo-designed 3.0-liter V12, making about 240 horsepower in the road car and up to 280 in the competition model. Four-wheel disc brakes were a first on a Ferrari.

The 1962 250 GT SWB offered by Bonhams, chassis #3337, was the first 1962 SWB made. It came equipped from the factory with the larger Weber DCZ/6 carburetors for higher performance. The car was finished in Grigio Conchiglia (grey metallic) paint with a black leather interior.The first owner was Steve Earle, who founded the Monterey Historic Automobile Races in 1974. He sold the car that year.

This steel-body model went through a series of owners. This includes one who used it for vintage racing and Ferrari Club of America events through the 1990s. (The chain of ownership is well documented.)The engine was rebuilt by Fossil Motorsports in Northridge, California. It’s boost to 325hp surely would make Enzo smile. It now has 250 GTO heads and crankshaft, hotter cams, plus higher compression pistons. In addition, it boasts blueprinted Weber carburetors and a taper-tuned exhaust system. The car was outfitted with competition suspension, a rollbar and a racing harness. Quickly, it became the fastest steel-body SWB in the world.

A new owner in 2001 had the car restored by Wayne Obry and painted yellow, and it was then shown at Pebble Beach, The Quail and the Cavallino Classic.

Back to the Road

The current owner of #3337 put this 250 GT SWB through a comprehensive restoration to original factory specifications by Rex Ngyuen, an award-winning restorer and FCA judge based in Los Angeles. The car was returned to road configuration and repainted Grigio Ferro, which was close to the original color, and the interior was redone in red vaumol Connolly leather.

In 2012, the car earned Ferrari’s coveted Classiche certification, which verifies that it retains all of its original major mechanical components, including the matching-numbers engine and gearbox, original bodywork, and chassis.

The car then filled a trophy case, winning First in Class Platinum and the Excellence Award for Best Restoration at the 2015 Cavallino Classic.

That spring, it took Best in Show Concours de Sport at the Greystone Mansion Concours d’ Elegance, and then top honors for Historic Vehicle at the Rodeo Drive Concours d’ Elegance. At Pebble Beach that year, this unique SWB won 1st in the Ferrari Class at The Quail and Best Road Car at the Ferrari National Meet. A few days later, at the FCA’s International Meet in Monterey, #3337 scored a perfect 100 points, earning another Platinum award and the “Best Road Car” award.

Now, it’s ready for a new home … and more awards.