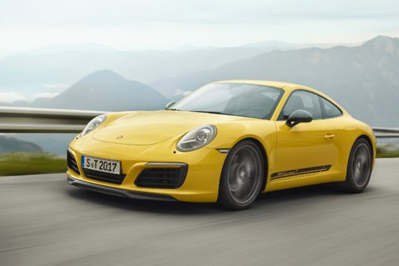 One must wonder if Porsche doles out year-end bonuses based not only on sales, but also on how many different variants of the 911 the development team can come up with. The recent introduction of the 2018 911T brings the number to 23 currently available in the U.S.

Porsche is billing the 911T as a purist’s model. Although the “T” designation comes from the early 1970s base model 911, the new “T” is a performance upgrade over the standard 911 Carrera. As back then, the “T” in 911T stands for “Touring,” which has surely become one of the most tortured badges in the automotive realm, now typically adorning the top trim level of numerous SUVs and family vans.

The 911T’s powertrain remains the same as the standard Carrera. That is a 3.0-liter turbocharged flat six with a very healthy 370 horsepower and 339 lb-ft of torque. With the manual transmission, the 911T gets a lower final-drive ratio (3.59:1 versus 3.44:1). This Porsche says cuts a tenth of a second off the 0-60-mph time.

To create the 911T, Porsche added some chassis performance features and subtracted some pounds. Instead of those heavy interior door handles, you get loops. The rear and rear side windows are lightweight glass, and Porsche deleted some sound insulation — all the better to hear the Sport Exhaust that’s standard on the 911T.

The interior combines the basics with a few special touches. This includes a slightly smaller-diameter GT Sport steering wheel and a shortened shift lever. Plus, 4-way power front seats with contrasting Sport-Tex trim in Racing Yellow, Guards Red or GT Silver. Those colors also accent the “911” logo on the headrests, the door opener loops and seat belts. Ordering the optional racing-style Full Bucket Seats (from the GT3 and GT2 RS) lightens the car a bit by removing the rear seats.

Some of that mass goes back in with some features not available on the base-engine Carrera, including PASM Sport Suspension and mechanical locking differential, and ride height lowered by 0.4-inch. A modified front spoiler lip is said to improve aerodynamics. Rear-axle steering, not available for the standard 911 Carrera, is an option for the 911T.

Oddly, the Porsche U.S.A. website shows a photo of the 911T splattered in fake or Photoshopped mud, as if to suggest off-road rallying. We wouldn’t try that in this car.

Although the “T” is the lightest 2018 Porsche 911 at 3,142 pounds, it’s just 11 pounds less than the base Carrera. The idea was not to create a lightweight 911 but to sharpen handling (ahem, “touring”) performance while keeping weight in check. The rocker panel stripe with “911T” logo probably adds a few ounces.

Porsche makes color selection easier by cutting choices to nine from the 16 on the standard Carrera. Among those are the very ’70s Miami Blue and Lava Orange. Exterior trim is Titanium Gray, including the wheels, SportDesign mirrors, badging and engine cover louvers.

For Porsche buffs who define “touring” as enjoying the essence of the 911 on a winding road or a track, the 911T is a special model, indeed. The $11,000 premium over a standard Carrera model certainly seems fair for the equipment and special features. Not to mention, some measure of desirability for future collectors.