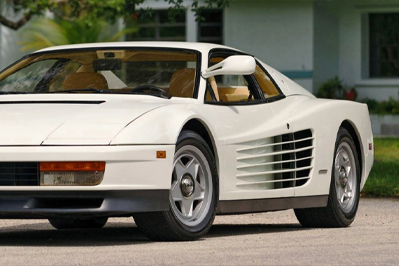 Dust off your Duran Duran cassettes.

The ’80s seem to be hot again, though nobody’s talking about the K-car. They are listening to lots of ’80s music, and if the recent Paris Fashion Week is any indication, they’re also looking back fondly on some of the clothing styles. Now might be a great time to consider a 1984-1991 Ferrari Testarossa, since (a) they still turn heads, (b) they’re a blast to drive and (c) Ferrari made a lot of them, so they’re fairly “cheap” by Ferrari standards.

The Testarossa name, of course, came from Ferrari history. The Testa Rossa (two words, meaning “red head”) racers are among the marque’s most celebrated. The Testarossa’s engine, likewise, pulled from the past. 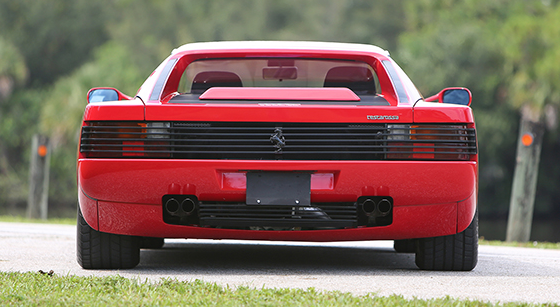 The Ferrari Testarossa burst onto the scene like a four-wheeled nuke, unleashed by Ferrari in 1984 to reclaim territory that had been captured by the Porsche 911 Turbo and Lamborghini Countach. The 911 Turbo had been stealing everyone’s performance thunder, while the Lambo simply out-glammed anything else on wheels. Maranello needed a counterpunch.

Ferrari, you might remember, had essentially been holding back on its American clientele through the 1970s. When the 365 GTB/4 Daytona was gone, we did not get its mid-engine successor, the 365 GTB/4 BB (for Berlinetta Boxer) nor that model’s immediate successor, the 512 BB. Some came in via gray marketers, of course. 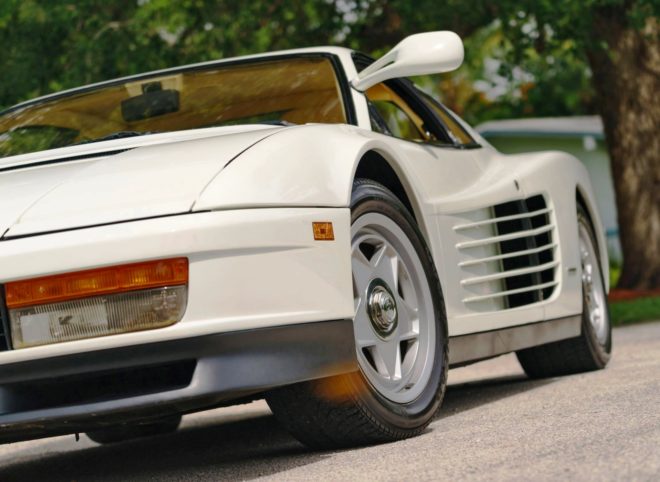 The 1980s Testarossa shared the BB’s somewhat elongated proportions, owing to the long engine placed behind the driver. The Testarossa was wider at the rear than the front. Ferrari design partner Pininfarina invented a way to distract eyes from the long rear side window and also guide air to the side-mounted radiators: horizontal slats began as character lines in the doors and then opened to giant functional intakes. The taillights hid behind slats, as well, a major departure from Ferrari’s classic round taillights.

Unfortunately, the side slats trickled down quickly to some fairly tasteless body kits for everything from Firebirds to pickup trucks. The Testarossa’s A-pillar-mounted side mirrors became another affectation favored by driveway customizers.

The Ferrari Testarossa used a 5.0-liter variant of the BB’s “boxer” 12. Getting technical, the boxer was really a V12 opened up to 180 degrees; the pistons did not travel in opposite directions from each other, as in a true boxer. Their movement in the 5.0-liter engine, though, translated to a very healthy 380 horsepower. Car & Driver, testing a private owner’s U.S.-spec 1985 Testarossa, got zero to 60 in five seconds flat, the quarter-mile in 13.3 seconds at 107 mph and a 176-mph max speed. The price, at the time, was just under $100,000 but would rise significantly in subsequent years.

Car & Driver, though, said the numbers were only part of the Testarossa’s appeal.

“No dispassionate dynamic analysis can convey much about the forza this car exerts on the road — or on your psyche,” the magazine said. 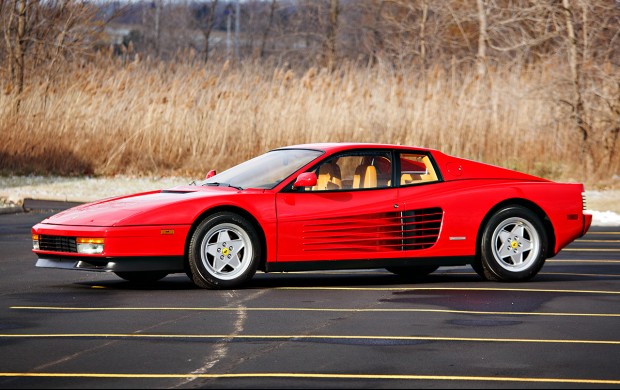 In the first two seasons, the dynamic duo drove a Daytona Spider, which in some scenes was the real thing carried on a flatbed truck. In most scenes, however, the production relied on Corvette-based Daytona replicars. Ferrari preferred the show use the real thing and offered a Testarossa for the third season. A stunt car was a replica built around a Detomaso Pantera.

The popularity of Miami Vice likely helped stoke demand for the Ferrari Testarossa. Maranello had no trouble filling the order books, building 7,200 over seven years. A 1992 redesign renamed the car 512 TR, and then the final upgrade in 1994 made it the 512 M.

Cue the Jan Hammer “Miami Vice” theme over the sound of a screaming engine and screeching tires. Fade to black.