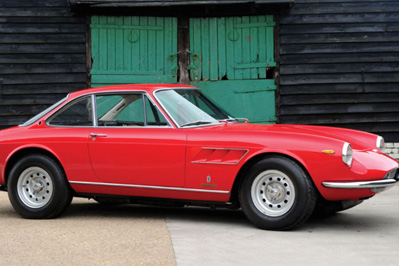 The Maturing of the Ferrari GT

Ferrari built its reputation on dual-purpose machines, the sports and GT cars one could drive on the road during the week and to the track on the weekend. There were more comfort-oriented models, such as the 250 GT Lusso, but the 250’s immediate successor, the 275 GTB and 275 GTB/4, skewed closer to the pure sports car side of the family.

The 1966 330 GTC showed a different direction. About the same size as the 250 GT Lusso, the 330 GTC was a more advanced automobile, and many marque buffs consider it the best driving Ferraris of the classic era. It seemed to fly under the radar for some time, however, as the more sport-oriented 275 and Daytona models monopolized the collector spotlight.

For a boutique manufacturer in the 1960s, and for all the bluster about Enzo Ferrari being more interested in racecars than road cars, the marque proved adept at pleasing its segmented market. It did so with a skillful adaptation of a small number of chassis and powertrains, aided by designer and builder Pininfarina.

With the end of the 250 GT series, which culminated with the 250 GT Lusso, the 330 GT 2+2 was left to carry on as the “everyday” Ferrari. Yet, many customers were looking for something in between that larger model and the edgier 275 GTB. The result was nothing less than another masterpiece from Ferrari and Pininfarina.

Introduced for 1966, the 330 GTC represented a new pinnacle of Ferrari road cars for the time. Built on the 275 GTB’s tubular steel chassis and sharing the same 94.5-inch wheelbase, the 330 GT was a two-seater, with a bit of room for luggage behind the seats to augment the trunk space.

Grand Touring at Its Best

The 330 GTC shared the same transmission and rear suspension layout as the revised 1966 275 GTB: two engine mounting points and two transaxle support points, with a rigid torque tube connecting the two to form a solid unit. As on the 275 GTB, the rear transaxle helped endow the 330 GTC with ideal weight balance for outstanding agility.

The 330 GTC shared nothing with the 250 Lusso’s design, but like that model, had a thin-pillared airy greenhouse with outstanding outward visibility. The rest of the body was pure Pininfarina artistry, with a strong resemblance to the 1964 500 Superfast, including a delicate oval grille, but with a tail inspired by the 275 GTS. The dash was elegant in its simplicity, the cabin impeccable in its finishes.

Driving comfort and cabin refinement were top priorities for the 330 GTC, which was intended as a long-distance car. Four-wheel independent suspension, a 5-speed manual transmission, light steering (though not power assisted) and four-wheel disc brakes helped make that so.

Heart of the Matter

The “330” in the model nomenclature, which was displayed on the car’s trunk, of course signified the 330cc displacement of each cylinder, for 3,967cc total. This single overhead-cam 4.0-liter unit was a larger version of the 275’s engine, with milder compression and fed by three two-barrel Weber carburetors. It matched the 275’s 300 horsepower, but at lower rpm and with more torque for a more easygoing demeanor. But make no mistake; this was not the V12 dilluted.

Ferrari produced 600 330 GTCs and in 1969 installed the larger 4.4-liter V12 to make it the 365 GTC, building 153 of the coupes. It was a 365 GTC that Beatles guitarist George Harrison showed to his friend, Eric Clapton, inspiring the superstar guitarist’s instant and enduring love for the marque.