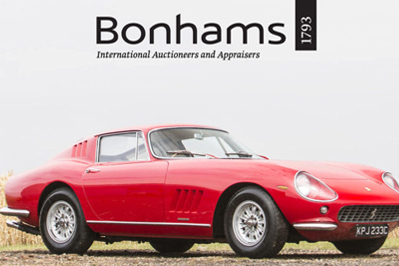 The Goodwood Revival, an annual festival devoted to vintage racing and sportsmanship, has a special place in the hearts of motorsports enthusiasts.  Every year, Bonhams holds an appropriately exceptional automobile auction on the grounds of the event. The cars on consignment this year match the refined, sporting ethos of Goodwood, from race-bodied Bentleys to a giant-killing Porsche 550 Spyder. Our Team of leasing experts will be watching the auction closely for hints about the state of the post-Pebble Beach market. Here are a few of their favorites.

Chris Warren, Premier’s Southeast Sales Manager, considers the 1962 Lotus Elite at Lot 109 among the British marque‘s best.  The Elite belied its racing heritage with four-wheel disk brakes and a fiberglass monocoque. Further, it was also the first road car with independent suspension at all wheels. This is one of only 23 Super 95s built, a specification that referred to its tuned 95bhp SOHC 1.2 liter four-cylinder.  While perhaps better known for its roadsters, this coupe stands out as one of Lotus’ most attractive designs.

Juan Garcia, our West Coast Sales Manager, dreams of taking Lot 108‘s 1971 Ferrari Dino 246GT along the Pacific Coast Highway. Sold originally with only Dino badging, the 246GT took time to find a place in the hearts of Ferrari enthusiasts.  However, with its values more than doubling in the last five years, it’s safe to say this Pininfarina-designed coupe is finally getting the attention it deserves.  The Dino’s mid-mounted V-6 ensures any straight-line deficiency is made up for with dexterity in the corners.

The iconic lines and distinctive color of the Lamborghini Diablo at Lot 134 have caught the eye of Michelle Yancey, Premier’s Sales Manager for the Southwest. Like the Miura and Countach before it, the Diablo was penned by Marcello Gandini and continued Lamborghini’s trend of radical designs.  The Diablo was a true 200mph supercar and eclipsed even the Ferrari F40 in performance.  The SV, or Super Veloce, was even faster; while cheaper, the SV was also lighter and slightly more powerful than the VT. However, though it lacked the VT’s four-wheel drive.

Northeast Sales Manager Keith Neelans is after the 1974 Porsche 911 at Lot 180. The Carrera was the top-of-the-line 911 in 1974, producing 210bhp from its rear-mounted flat six. It comes equipped with its original alloy wheels, leather seats, and “whale tail” rear spoiler. This car is one of only 6 built in right-hand drive for the UK. Like a true driver’s car, it has been well cared for but driven often – its odometer exceeds 120,000 miles.  The engine has a recent rebuild for its next lucky owner.

Our corporate office in Woodbury, Connecticut is buzzing about the distinctive drop-top at Lot 123. Despite being considered “visually challenged” by many, the Daimler SP250’s 2.5 liter hemi V-8 and fiberglass body made for a superior sports car.  In a true feat of engineering, this one is now a four-seater. In addition, it comes with a retractable hardtop – revolutionary in the early 1960s.  The build took over 5,000 hours of design and engineering. As a result, this already eccentric convertible is quite the head-turner.

Bonhams’ auction has 86 reasons to make a trip up to the UK. That’s on top of three days of world-class vintage racing. Calling Premier today to get pre-approved to lease from auction is a savvy way to add Porsche’s diminutive racing roadster or Ferrari’s 275 GTB to your garage.  If you’re bidding, be sure to brush up with Auctions 101 to make sure your favorite motor doesn’t slip through your fingers.