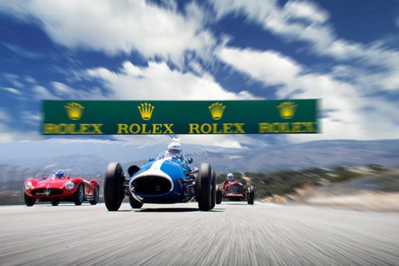 For the next four days the Mazda Leguna Seca racetrack will be awash with elegance. Further, transporting viewers back to a time when auto racing was the epitome of class and drama.  Like last month’s Le Mans Classic, the Monterey Motorsports Reunion is an outlet for the public. It allows them to see the highest order of vintage racing cars used as originally intended.

Speeds are certainly slower, but these vintage races capture the romantic, visceral quality of early racing where daring and athleticism were paramount. The same lack of technology and regulation that made driving these cars so challenging also allowed for some of the most beautiful and varied forms ever draped over a frame.

There are nine separate race groups, from open-wheeled pre-war sports cars to the streamlined fiberglass wedges of the early 90s.  BMW is this year’s featured marque, celebrating the Bavarian manufacturer’s centennial and the racing successes of cars like the 328, 2002, and M1.

Many of the cars that take to the track are worth seven figures; it may be the only place in the world where cars like the Porsche 356, Ferrari 250 GT, and Jaguar D-Type are among the most common. Further, a priceless Aston Martin DBR2, one of only two, is a major highlight in the paddock.  The races are technically amateur, but many entrants ask professional drivers to pilot their cars. Guaranteeing skilled, spirited driving and hopefully avoiding the destruction of a historical treasure.

Besides a venue for world-class vintage racing, the Motorsports Reunion is also an opportunity for enthusiasts and clubs to gather their cars in marque-specific corrals. There are twelve official corrals this year, including Porsche, Alfa Romeo, and DeTomaso, each promising to rival a quality local car show.

The races take place just minutes from the peninsula during Monterey Car Week. Subsequently, the only cars more notable than those on the track are those in the parking lot. In keeping with the tone of vintage cars and Pebble Beach, well-appointed suites are available directly above pit row, offering a taste of air-conditioned luxury in the middle of the action.

If you’re in Monterey, or just trying to keep up with the latest news, be sure to check out our News & Events blog.  Our Monterey Itinerary has everything you need to stay organized.