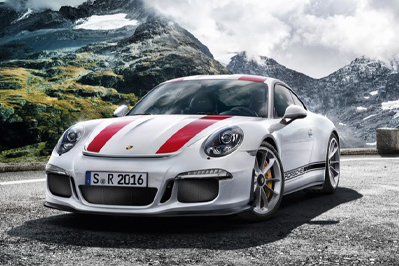 Porsche Builds a 911 for the Purest of Purists

Porsche did not need to build the 911 R, which it unveiled at the Geneva Motor show. It is a gift to the purists – or at least their memory – who would not let the 911 die in the 1980s. The profit on the 991 cars to be built, while certainly not pfennigs, is going to be small compared to a fleet of Panameras. The 911 R comes with a $184,900 pricetag.

So, raise a stein to the crazies inside Porsche who lose sleep over how to not only keep the 911 relevant, but to ensure that it honors every 911 that came before.

Porsche will build just 991 of the new 911 R for worldwide markets, so it will be a rarity. This is a hardcore machine, which is just as it should be for a car named for a factory racer.

The original 911 R was a super-lightweight 911 offered to racers in 1967, but just a couple dozen were built. Its flat six was tweaked to 210 horsepower, and extreme weight-trimming measures (including fiberglass body panels) dropped mass to around 1,900 pounds. The 911 R competed in rallies, the Targa Florio and world record runs.

Porsche says the new 911 R will deliver an “unfiltered driving experience.” Read that to mean it will be loud, harder-riding and un-luxurious. And that’s exactly the point. The 911 R is aimed at road drivers, mainly, but is track capable if you don’t mind not setting the fastest lap times. (More on that in a moment). 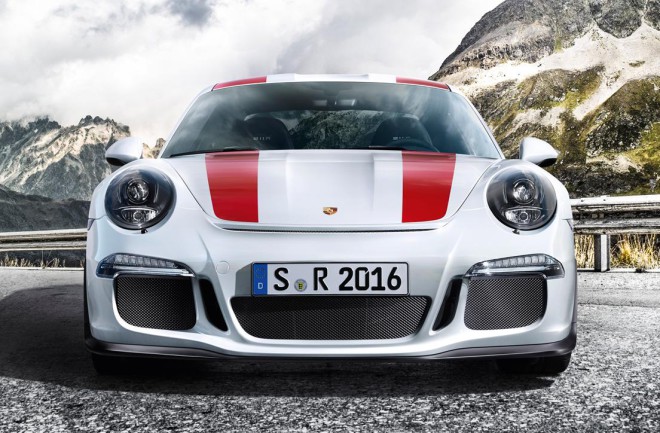 Don’t Even Ask About Floormats

Porsche trimmed the weight to 3,021 pounds, which makes it 110 pounds lighter than the GT3 RS and a featherweight in today’s supercar market. The front luggage compartment lid and front fenders are made of carbon fiber, and the roof is made of magnesium, lowering the vehicle’s center of gravity. Porsche reduced interior insulation and ditched the useless rear seats, and instead of interior door handles, you get pull straps. Air and stereo are also cut, but you can add them back in at no charge. 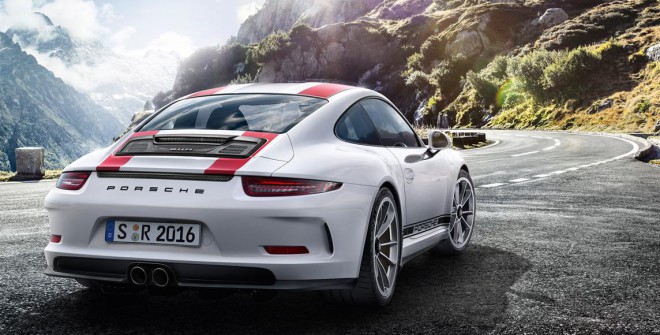 Not the Quickest 911, Just the Leanest and Meanest

What’s with the funny math? The 911 R comes only with a 6-speed manual transmission. There’s no option to get the lightning-quick dual-clutch PDK used by those other 911 monsters. So, the 911 R is not for the driver who can’t bear to get his doors blown off in a bragging contest. It’s for the driver who wants to feel the essence of the 911, dialed up to maximum and then it breaks the dial.

All Porsche’s Go-Fast Goodies in One Car

There’s no giant rear wing, not even a throwback “whale tail.” Instead, the 911 R gets the 911 Carrera’s automatic-deploying rear spoiler to preserve the body’s sleek shape.

Heritage runs thick and fast through the 911 R’s veins. The full bucket seats have carbon fiber backrests and seat centers upholstered in a houndstooth pattern, paying homage to the original 911. Go full nostalgia and order the optional stripe package that recalls the original 911 R.

History lessons were never this much fun. 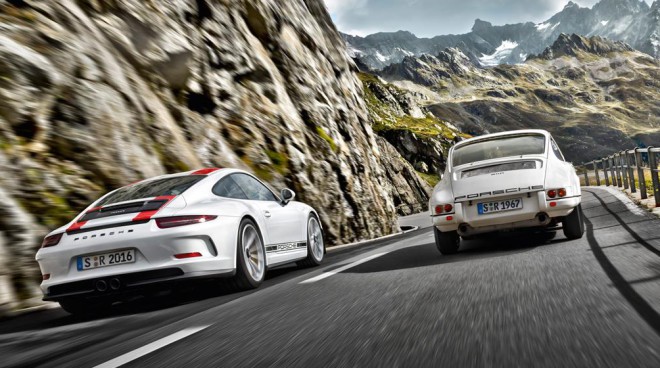 Lease a Porsche with Premier

Premier Financial Services, of course, caters to all kinds of Porsche enthusiasts, and for those on the list to get a 911 R, its Simple Lease terms provide an ideal way to enjoy this special Porsche today and perhaps benefit from appreciation down the road.