Cars to Watch: Bonhams At Goodwood 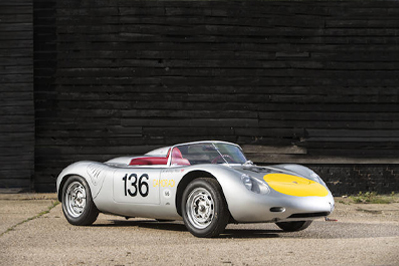 This weekend is Bonhams Festival of Speed Auction in Chichester, Goodwood in the UK. While the Premier team will not be in the country for the auction, we are still curious what happens in the exotic, vintage and highline industry, near and far. Below are a few of the cars we’re watching this weekend.

Premier’s VP of Sales, Doug Ewing is watching the 1959 Fiat-Abarth 750 Bialbero ‘Record Monza’ Coupe at Lot 333. Doug simply says “Hey, that’s a cool car, I want to see how it does”. According to Bonhams the vehicle has been inspected by immensely experienced marque experts. Further, they express no doubt that this is an absolutely authentic example of the type and one of the prettiest Zagato designs.

Premier’s West Coast Sales Manager, Juan Garcia has his eye on the 1964 Aston Martin DB5 Sports Saloon at Lot 311. This Aston has  been memorable to Juan ever since he saw his first James Bond movie, it is the most famous of all ‘James Bond’ Aston Martins. Aston Martin’s post-war evolution took a giant step forward with the launch of the DB4 in 1958. Classically proportioned, the Touring-designed body established an instantly recognizable look that would stand the marque in good stead until 1970.

Premier’s Midwest Sales Manager, Dave Accorsi, is watching the 1964 Jaguar E-Type Series 1 4.2 Litre Roadster at Lot 322. When Dave saw this car on the auction list he was reminded of his childhood days when his neighbor drove a 1964 Jaguar E Type, he recalls thinking in his childhood innocence the front end looked “a mile long”. Conceived and developed as an open sports car, the Jaguar E-Type debuted at the Geneva Salon in March 1961 in Coupé form.

As a result, the car caused a sensation. Spontaneous applause breaking out at the unveiling – with its instantly classic lines and a 140mph-plus top speed. Consequently, the design owed much to that of the racing D-Type. A monocoque tub forming the main structure while a tubular spaceframe extended forwards to support the engine. The latter was the 3.8-litre, triple-carburettor, ‘S’ unit first offered as an option on the preceding XK150.

Premier’s Northeast Sales Manager, Keith Neelans is interested in the famous 1961 Porsche RS-61 Spyder Sport-Racing Two seater. It is at Lot 307, and property of Sir Stirling Moss OBE. Keith is fascinated by its history and is a longtime admirer or Sir Stirling Moss. For many enthusiasts one of the world’s greatest-ever racing drivers, and most certainly the standard-setting driver of his heyday period, 1958-1962. He is uniquely well-placed, as winner of multiple World Championship Grand Prix and major-league Sports Car races, to judge the quality of such classical competition cars as the Porsche RS-60/61 series.

Premier’s Southeast Sales Manager, Chris Warren has choosen the antique 1929 Bugatti at Lot 315. He’s always been a fan of their craftsmanship and over-all look and feel. Further, by the early 1930s Ettore Bugatti had established an unrivaled reputation for building cars with outstanding performance on road or track; the world’s greatest racing drivers enjoying countless successes aboard the Molsheim factory’s products. He often choosing them for their everyday transport.

Premier’s Southwest Sales Manager, Michelle Yancey is watching the 1973 Porsche 911 S at Lot 329. This is due to it’s incredibly high market value and the amazing paint job certainly catches her attention as well. This car was previously owned by renowned British artist Richard Hamilton and stayed in his family for 40 years. It is believed only five or six examples were delivered in this unusual black-on-black colour scheme. A rare ‘F-series’ example (only 40 on the production line), very few good matching numbers examples remain today.

Don’t forget to review your auction basics here and be sure to contact Premier Financial Services if you will be bidding.  Premier’s Simple Lease is a perfect alternative to financing an exotic or vintage marque.  Whether it is a classic Porsche, vintage Aston or Alfa or even an antique Bugatti, Premier can cater a lease to your needs.