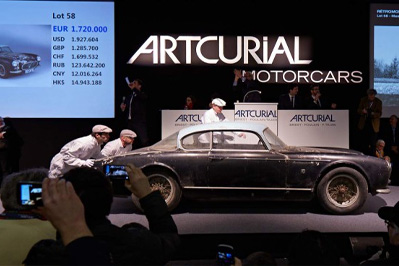 This weekend, Paris France will host their Artcurial Motorscars Auction on June 22nd. While none of the PFS team will be in attendance at the auction, we can honestly say we all wish we were. Below is a compilation of vintage motor cars we’ve got our eyes on. Any of the cars you see available for auction this weekend can be leased with Premier, and we can even assist you in scheduling overseas transportation.

The PFS team overwhelmingly has chosen to feature the 1953 Ferrari 16 MM Barchetta. Further, the leader of the sales team, Doug Ewing was the first to point out its beauty when the auction list went up. According to Artcurial, “At this point, it is worth remembering that between 1948 and 1950, Ferrari produced just 25 examples of the 166MM barchetta. A little wonder powered by the renowned V12 Colombo-designed engine. This model achieved enormous success in competition, including victory in the 1949 Le Mans 24 Hours, driven by Luigi Chinetti.”

Continuing with the Ferrari theme, Southwest Sales Manager, Michelle Yancey is curious to see how this 1974 Dino 246 GTS performs at auction. She thinks the yellow color is incredibly eye-catching, especially on a Ferrari. According to Artcurial, “The name “Dino” reflects how important this model was to Enzo Ferrari. It was the name of his son who had died from a type of muscular dystrophy in 1956, at the age of 24. In earlier days he had played a part in the design of the 1961 championship-winning four-cam V6 engine that was the soul of the 246.

Converted for road-use by the engineer Aurelio Lampredi, it found a home in the magnificent Pininfarina-designed body that became the 206 GT. The first mid-engined Ferrari, it enabled the manufacturer to widen the range with a less costly model than the 12-cylinder Ferrari. The 206 was no less outstanding, offering an excellent power to weight ratio. Additionally, a sportiness not shared by its bigger sisters. The model evolved into the 246, with a 2.4-litre V6 version that was more versatile and easier to drive. In addition to the closed berlinetta, there was a version with removable roof, the GTS, which had the advantages of the coupé and the cabriolet together.”

Keith Neelans, Premier’s Northeast Sales Manager is watching this 1959 Ferrari 250 GT California Spider. Of course, we can’t forget about the 1959 Cal Spider and its impact on the Ferrari marque. According to Artcurial Motorcars, “Ferrari’s destiny was changed by the 250. Starting as a small-scale constructor, it took on an industrial dimension and gained the international reputation that it enjoys today. Centred on the famous V12 3-litre engine, which had nothing further to prove, two Ferrari families were born; one destined exclusively for the track and the other, offering a level of comfort and equipment missing until that point, for the road. The racing line gave birth to such legendary cars as the Testa Rossa. Plus, the Tour de France berlinetta, 250 GTO and the 250 LM.”

Premier’s Southeast Sales Manager, Chris Warren is eager to see how the the 1929 Duesenberg Model J Cabriolet Murphy performs this weekend. Chris gets a thrill watching how American cars auction overseas. According to Artcurial Motorcars, “The Model J Duesenberg is the apex of the American Automotive effort in the 20th century. It is the finest example of a true Pre-war Classic; the mightiest of American automobiles and would be the centerpiece of any great automotive collection in the world.”

Premier’s West Coast Sales Manager, Juan Garcia is watching the 1931 Bentley 8L Sportsman Coupe as its marque still remains one of Juan’s favorites after having worked with Rolls Royce and Bentley Motors in Crewe England years ago. This Bentley model is known as the ‘last big Bentley’. According to Artcurial Motorcars, this Bentley is “a true aesthetic and technical achievement. A centerpiece of Bentley’s history, a testament to the top-level rivalry between the finest marques. Further, this 8-Litre Bentley is far more than an automobile; it is a work of art encapsulating the heritage of the most prestigious automobiles in the world.”

Premier’s Midwest Sales Manager, Dave Accorsi is following the 1934 Mercedes-Benz 380 K. With such a distinguished look, it reminds him of an old Indiana Jones movie. Everyone should keep an eye out for this beauty. According to Artcuria Motorcars, “Of the 150 or so Mercedes 380s ever made, just 16 were Cabriolet A’s, and only 3 or 4 others are thought to have survived. Our car is luxuriously fitted, with a handsome wooden dashboard and adjustable seats. Since its 8,000-hour restoration it has remained impeccable, with dark red leather upholstery. Additionally, matching red carpet and classy, two-tone red paintwork. Beneath the bonnet is the original, splendidly sober, eight-cylinder engine with its supercharger at the front.”