Cars to Watch at Amelia 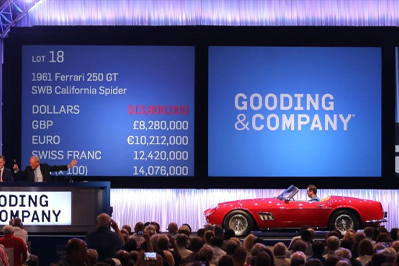 For many,  vehicles are a statement piece, a work of art, and a prized possession. This weekend at the Amelia Island Auctions there will be many venues showcasing today’s finest example of automotive engineering. Premier Financial Services has a team in attendance at the Amelia Island Auctions and Concours d’Elegance this year, including Mitch Katz, Doug Ewing, Keith Neelans and Christopher Warren. Here are a few of the autos we’ve got our eye on this week.

Doug is thrilled to see this car up on the auction block, with a rare 12-cylinder manual transmission. This vehicle was one of only 20 brought into the US and is selling for double what the current market is bearing. This car is super unique, truly one of the last of its kind produced… RM considers it the last great analog Ferrari V-12.

Doug says  this unique Ferrari is his other favorite to watch this weekend. According to RM: “In the realm of the Ferrari Superamerica, the 400 Superamerica SWB Cabriolets have always been the most desirable. Moreover, as this car features gorgeous coachwork, unrivaled luxury, the shorter wheelbase chassis, and the most potent 4.0-liter V-12 engine, it can truly be considered one of the greatest grand touring Ferraris of all time. Furthermore, proceeds from the sale will be donated to the owner’s foundation for the education of children—an act of generosity befitting of such an incredible car.”

Northeast Sales Manager, Keith Neelans has a fondness for vintage Porsches, particularly the 356 models. Keith’s got his eye on a 1955 Porsche 356 Continental Cabriolet at Gooding & Co (Lot 41.) “Its just so iconic. Its the type of car where you get it, keep it, drive it and never get rid of it.”

Our friends over at Hagerty Classic Cars will be watching the 1969 Ferrari Dino 206 GT at Bonhams auction. Here’s what Hagerty has to say… “The 206 Dino is distinguishable from the much more common later series production 246 cars by its aluminum bodywork, wood-rimmed steering wheel, unique exhaust tips and, of course, its 2.0-liter aluminum block V-6 engine. Just 150 206s were built in 1968 and ’69. Bonhams’ example has an unknown early history and was reported stolen briefly in the early 1990s, but it is restored and represented as matching numbers. Gooding just sold a 206 Dino in Scottsdale for $418,000, well under even Bonhams’ low estimate for this car, so it will be interesting to see where it falls.” View Hagerty’s Auction Preview here.

Outside of the auctions, Chris Warren, Premier’s Southeast Sales Manager is excited to see the new 2016 Lamborghini Aventador SV on display at the Concours on Sunday. The Lamborghini SV stands for “super veloce” translating to “super fast” in Italian. The aerodynamic SV design has caught everyone’s attention and we can’t wait to see it.