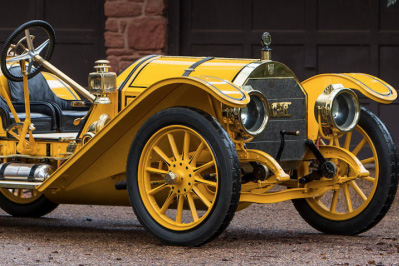 You might consider cars like the Ferrari 250 GT SWB and Porsche 356 Speedster ideal examples of sports cars that one could drive to the track, race, and then drive home with a trophy in the trunk. But then, one might ask, does a racecar really need such extravagances as doors, a windshield or front brakes?

It seems that was a question in 1911, when Trenton, NJ-based Mercer named for the county Trenton was in, introduced the Model 35 Raceabout. Its purpose spelled out right in the name, the Raceabout, became the definition of “bare bones.” It was built to go fast and win races, period.

Bonhams will offer a 1913 Mercer 35J Raceabout at its Amelia Island sale, with a pre-sale estimate of $800k-$1m. A Raceabout offered at auction is a rarity; many have remained in the same collectors’ hands for decades.

Car buffs of all stripes like to tout their favorite marque’s “factory racers,” cars built for competition from the start. Most have been stripped-down versions of road cars. The Mercer Raceabout was the opposite, a racecar with minimalist bodywork and headlights, all of which could be easily removed upon arriving at the track. Mercer was financed by the Roebling family, known for making the wire rope used for suspension bridges, including the Brooklyn Bridge.

Faster than a Speeding Train

Finley Robertson Porter designed the Mercer Raceabout, including the high-compression T-head engine. The 301 cu.-in. inline four had cylinders cast in pairs. Although officially rated at 34 horsepower, the engine was widely believed to make about 60. With the 3-speed transmission (later, a 4-speed), it could take the Raceabout to 70+ mph in stock form. By comparison, a fast train at the time could hit about 60.

The Raceabout’s “body” was essentially a “dog house” hood covering the engine and long, sweeping fenders and running boards. Two small bucket seats attached to the floor, their backrests right up against the big gas tank on the short rear deck. There was no luggage trunk, only a toolbox. A very small monocle-style windshield in front of the driver provided cursory protection. The Raceabout displayed a brutal beauty, especially when painted Mercer Yellow, like the Bonhams car, which was restored by Brass Era authority, Stu Laidlaw.

The stripped-down speedster look was also adopted by others, including the Stutz Bearcat introduced a year after the Raceabout, and another New Jersey native, the Simplex. (Mercer would later buy Simplex, holding it for just a couple of years.) And, long before Oldsmobile’s 4-4-2 muscle cars were tearing down Main Street and drag strips, the brand offered the similarly stark Autocrat Speedster from 1911-1912.

The Raceabout was not all about straight-line speed. The 108-inch wheelbase was compact for the time, a foot shorter than the Bearcat’s. A low center of gravity and wide track gave the Raceabout agile handling for the time.

The Mercer earned its pedigree on the track, winning five out of six races entered in 1911. Raceabouts finished twelfth and fifteenth in the 1911 Indianapolis 500. The following year, International Motorsports Hall of Famer Ralph De Palma set eight new world-class records with a Raceabout in Los Angeles. Amateur Spencer Wishart set four more records in Columbus, Ohio with a Mercer purchased off the showroom floor. The company ended its racing when two Raceabouts crashed killing a driver and riding mechanic.

A Rare Piece of History

Mercer made about 600 Raceabouts from 1911-1914. At around $2,500, it was a pricey acquisition in its day. Another model, the Runabout, used the same frame and engine but included a windshield, top, starter, generator and, if the customer wanted, doors. Mercer made about 400 Runabouts.

The 1950s Ferrari Testarossa, 1960s Cobra and 1990s Viper defined raw performance and racing excitement for their generations, yet they all owe a debt to the Mercer Raceabout from New Jersey.