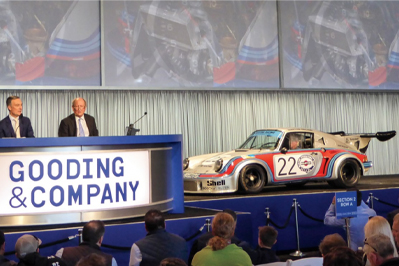 Last year, Gooding & Company’s Amelia Island Auction led the pack with a 95% sell-through rate and $36 million in sales over one afternoon. This year, they are hoping to beat those numbers with a 91 car lineup, 9 of which have 7-figure valuations.

We will be watching all the cars sold around the Amelia Island Concours d’Elegance, from a Fiat 500 Topolino to a Ferrari Dino, but here are a few our team are most interested in.

Ross Dressel, Midwest regional Sales Manager for Premier, is interested in the Porsche 911 SC/RS located at Lot 65. This Group C rally car was one of 5 employed as Rothmans team cars for the 1984/1985 season. These heavily modified 911‘s enjoyed victories throughout Europe and the Middle East.

Chris Warren, Premier’s Southeast Sales Manager, is watching the 1974 BMW 2002 Turbo at Lot 16. The 2002 was already among the quickest performance sedans by 1973, the addition of a turbocharger and mechanical fuel injection left the competition behind. Fender flares, decals and a front air dam made it look the part.

Michelle Yancey, our Southwest Sales Manager, has her eye on Lot 83‘s Porsche Carrera GT. With its mid-mounted, 605hp V10 and a top speed in excess of 200 mph, the Carrera GT is a 21st century super car. Unlike other modern sports cars, the GT shipped without any sort of electronic driver’s aids, earning it a reputation for being unforgiving to novice pilots.

Lot 61‘s 2005 Ford GT is a favorite of Northeast Sales Manager Keith Neelans. Made for the marque‘s centenary, the Ford GT followed the styling cues of the legendary GT40. The GT boasted a rear-mounted supercharged V8 capable of developing 550hp. This example has under 4,000 miles on the odometer.

Premier’s West Coast Sales Manager, Juan Garcia, is following the Porsche 911 GT2 RS at Lot 21. The GT2 RS is Porsche‘s most powerful production car, thanks to the 700hp produced by its 3.8 liter flat-six. Larger brakes and a robust rear wing keep all that power in check. The GT2 on offer is desirably equipped with the Weissach package for added lightness.

Premier’s corporate headquarters in Woodbury, Connecticut, is watching the 1984 Audi Sport Quattro at Lot 63. In the same vein as the Lancia Stratos, the Sport Quattro was built in very small numbers to qualify for the FIA Rally Championship. The aluminum inline-five under the hood still produced over 300hp after being detuned for the road.

A Simple Lease from Premier Financial Services takes the stress out of bidding at auction. Premier is your path to any high-end automobile, from leasing a Lamborghini from auction to driving it home from the dealer. The stakes are high at Gooding & Company’s Amelia Island Auction, so be sure to brush up on our auction basics.