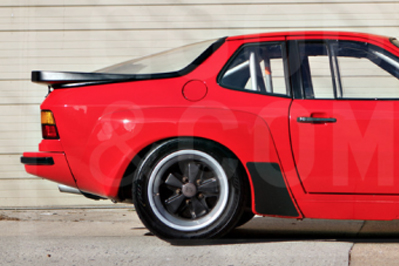 The Porsche 924, introduced in 1976 (1977 in the U.S.), is certainly one of the great “Cinderella” stories of the car world. Emerging from a Porsche contract to develop a sports coupe for Volkswagen, the 924 became a Porsche when VW dropped the project.

The front-engine, rear transaxle layout gave the 924 kinship with the V8-powered 928 luxury GT that Porsche had begun developing the same time as the 924. The two cars together began what could have been a total changeover to front-engine, water-cooled sports cars had cooler heads not prevailed.

You probably know the rest. The 924 earned respect with the Turbo model before graduating to true Porsche status. It became the much better 944 and, finally, the 968 that ended the series in the 1990s. Before that happened, Porsche built a Group 4 homologation special. They are the 924 Carrera GT, with GTS and GTS Clubsport factory racer offshoots.

At its Amelia Island Concours sale, Gooding & Company will offer one of the 15 924 Carrera GTS Clubsport models built It has a pre-sale estimate of $250k-$300k.

From Beetle Parts to the Track

Upon its arrival, the Porsche 924 did not exactly convey racing capability. To achieve a relatively low cost, the car had been developed around VW parts. This includes an Audi inline four-cylinder engine, suspension combining Golf and Beetle pieces and front disc / rear drum brakes.

The rear transaxle, though, was key to the 924’s sports car cred, giving it 50:50 balance for agile handling. That fact was not lost on those who saw greater potential in the car,. However, it took a few years to get there.

The 924 Turbo arrived Stateside for 1980 with 143 horsepower, compared to 110 in the standard model. It was the only Porsche wearing a “Turbo” badge that American customers could buy. This is due to the 911 Turbo having been sent on hiatus from this market.

Finally, the 924 had the power and speed to go with its racy design. The next step was actual racing.

The 924 Gets Very Serious

Thirty-eight years ago, Porsche and other European makers were still keeping their best hardware out of the U.S. market, rather than face the expense of DOT/EPA certification. The Porsche 924 Carrera GT is a good example.

Porsche needed to build 400 units of a lighter, more powerful road car in 1980 to qualify for FIA Group 4 competition (plus IMSA GTO). The company built 406 of its 924 Carrera GT with a 210-hp version of the 924 Turbo engine. A prominent, off-center hood scoop supplied air to the intercooler.

Other body modifications gave the 924 Carrera GT/GTS a look that Americans would see soon enough. To accommodate the wider Fuchs wheels, the cars used fiberglass-reinforced polyurethane front fenders and rear-quarter blisters that widened the car. The look carried to the 944 introduced in 1982, but without the add-ons.

For full homologation, Porsche needed to offer 50 more race-ready models, and it built 59 of the 924 Carrera GTS. Maximum factory race prep turned 15 of those into the Clubsport, an even lighter, more stripped-down model with 280 horsepower (up from 245 in the GTS).

On the 924 Carrera GTS and Clubsport, the standard model’s popup headlights were replaced with Perspex headlight covers, the hatch glass and side windows were Plexiglas, the door windows fixed in place and using sliding panels. Door skins were fiberglass. The cockpit gained an aluminum rollcage, plus seats from Porsche’s 935 racecar with full harnesses. In addition, a suede-wrapped steering wheel and a fire extinguisher.

The 924 Carrera GTS Clubsport on offer by Gooding & Co. was originally a Porsche press vehicle, according to a 1997 letter on file from Jürgen Barth, who was then Porsche’s customer racing coordinator. It was later owned by Porsche privateer racing team owner Bruce Leven and then Alan Friedman, founder of PCA Club Racing, who campaigned it at Sebring, Watkins Glen, Lime Rock, and Road Atlanta.

The 924 Carrera GTS Clubsport is among the rarest Porsches, a true factory racer that helped enhance the front-engine sports car’s, even if it would not be the company’s destiny.