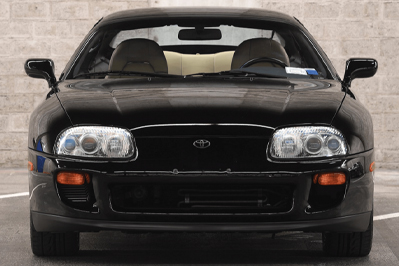 Will the 2020 Toyota Supra, co-developed with BMW and sharing a BMW platform and engine live up to the legacy of the Supra that departed the U.S. market in 1998?

The road tests are not in yet, so judgment must be reserved. The older Supra, though, as revered by its fans as the 911 is by Porschephiles, has been bringing interesting prices lately. Earlier this year, a red 7,000-mile ’93 Supra Turbo sold for $121k from the Bring a Trailer auction site. Last year, two other low-mile examples sold on the site for $70k and $80.5k.

If you missed out, RM Sotheby’s will offer a black 1994 Supra Turbo Sport Roof with 11,200 miles at its Amelia Island sale. The pre-sale estimate is $100k-$120k, or nearly three times the original list price.

The Supra hailed from a special time for Japanese brands. By the 1980s, the Nissan 300ZX and Mazda RX-7 had grown turbocharged muscles, and Toyota completely divorced its third-gen Supra from the original model’s humble Celica roots, making it a refined GT.

Mitsubishi jumped into the ring with its 320-hp 3000 GT featuring all-wheel drive, four-wheel steering and active aerodynamics. The 300ZX became a twin-turbo, 300-horsepower 911 hunter, and the third-gen RX-7 went all-in with a screaming twin-turbo Wankel rotary.

All would eat the dust of Toyota’s fourth-gen Supra, or, as its adherents refer to it, the A80 or Mk. IV, that arrived in 1993.

The Supra’s design mixed classic GT proportions and influences from the 1967 Toyota 2000 GT with modern touches. For example, intriguing detailing in the headlights and taillights helped trigger the modern trend in stylized lighting. In addition to the coupe, there was the Sport Roof version offered by RM Sotheby’s. This was Toyota’s name for the one-piece removable roof panel that many generically call a “targa” roof.

Many remember this Supra Turbo by the huge, hoop-style rear wing seemingly inspired by the Ferrari F40, or perhaps even the 1970 Plymouth Superbird NASCAR homologation special. Toyota claimed the appendage generated 66 pounds of downforce at 90 mph. It also generated wildly divergent opinions on taste, with many glad that it was an option rather than standard.

The Mk. IV Supra was based on a shorter version of the platform underpinning the Lexus SC coupe (Toyota Soarer in Japan) and was built in the same plant. The robust foundation was “as flex-free as a granite tombstone” according to Car & Driver. To save weight, Toyota eschewed electronically adjustable suspension damping that was then coming into vogue.

Base versions of both cars shared a naturally aspirated 3.0-liter, 220-horsepower inline-six, the “2JZ” that’s become legendary in Toyota tuner circles. The top Lexus coupe, the SC400, had a 250-hp V8, while the top Supra got a twin-turbo version of the 2JZ making 320 horsepower. Starting price was about $38,000 – just a bit less than the four-cylinder, 236-horsepower Porsche 968.

The Supra Turbo’s engine employed two turbochargers operating sequentially. The second one joined in at about 3,000 rpm, evening out power delivery. Transmission choices included a slick 6-speed manual or 4-speed automatic, the latter with a manual mode.

The 3,450-pound Supra Turbo left no reviewer unimpressed, doing 0-60 in 4.6 seconds and the quarter-mile in 13.5 at 106 mph. That was quicker than the NSX, Porsche’s 968 and V8-powered928, RX-7, Corvette and 300ZX Turbo. Top speed was electronically limited to 155 mph, but a Toyota engineer admitted to media that without the limiter, the Supra Turbo could touch 180.

The super Toyota was no one-trick pony, as Kim Reynolds observed in Road & Track: “Like the Supra Turbo’s acceleration, its handling and braking prowess are close to the best we’ve ever seen, regardless of cost. A Supra with this magnitude of road-rocket performance could be history in the making.”

The Supra Turbo became a favorite of tuners, with modified versions prowling the streets with 600+ horsepower. Many no doubt took inspiration from the car’s role in the 2001 film, “The Fast and the Furious.”

Perhaps the next sequel in that franchise could be titled, “Fast and Furious 10: Supra Soaring.”