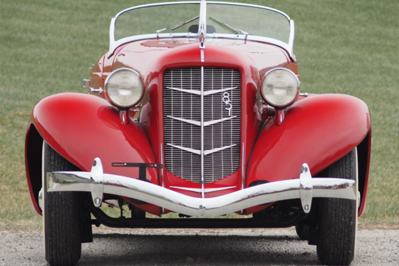 You could run yourself ragged trying to get to all the Scottsdale, Arizona auctions. Barrett-Jackson, Bonhams, Gooding & Company, RM Sotheby’s, Russo & Steele and Worldwide Auctions, wouldn’t that be fun?

Worldwide Auctions gets rolling on Jan. 16 at 5 p.m., a sale highlighted by a selection that includes numerous pre-WWII beauties. The headliner is a 1925 Bugatti Type 35A Grand Prix with a documented history. That includes racing in period by Bugatti concessionaire, Jean Ollivier. It’s goal is to fetch $1.9m-$2.4m.

Another rarity for connoisseurs of French classics is a one-off 1947 Delahaye 135M Cabriolet, one of four 135M chassis bodied by Swiss coachbuilder Sécheron. Further, this Delahaye was exhibited at the 1947 Geneva Salon. The two-tone purple and magenta paintwork over lavender interior is not for the shy, but the savvy will appreciate that it is offered without reserve.

Auburns, Cords, and Duesenbergs …  Oh My

The Worldwide auction offers a number of Auburns. This includes two 1935 851 Super-Charged Speedsters offered without reserve, plus a V12-powered 1932 Speedster and a 1933 V12 Cabriolet. Also from the Auburn-Cord-Duesenberg family, a 1936 Duesenberg Model JN Tourster. This car was the last of 10 JN models built, and one of only three long wheelbase examples. Above all, it is up for auction at no reserve.

Postwar cars run the gamut, but one Italian machine really stands out, a 1958 Alfa Romeo 1900 Sport with stunning, one-off custom coachwork by Autotechnica del Lario in Lecco, Italy. The pre-sale estimate is $350k-$425k.

A Simple Lease from Premier Financial Services takes the stress out of bidding at auction. Further, Premier is your path to any high-end automobile, from leasing a Alfa Romeo from auction to driving home that Bugatti from the dealer. Bidders are determined at Worldwide Auctions Scottsdale Auction, so avoid a costly mistake with our auction basics.