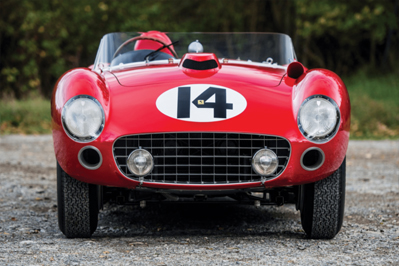 Eight-figure prices for Ferraris are usually associated with Monterey or Scottsdale auctions, but the second-highest auction price for 2018, $22,000,500, went for a 1956 Ferrari 290 MM at the RM Sotheby’s Petersen Museum auction in December. That was $26m behind the 1962 Ferrari GTO the auction house sold in Monterey and just $500 over the Duesenberg SSJ sold at Monterey by Gooding & Co.

One of just four built and three remaining, this 290 MM raced with success, first as a Ferrari factory team car and later in the hands of privateers. Scoring wins for Stirling Moss and Dan Gurney, among others, earned chassis No. 0628 esteemed racing provenance. In addition, restoration and certification by Ferrari Classiche codified its collector allure.

Ferrari was quite experimental in the 1950s, fielding numerous engine and chassis combinations in a series of sports-racing barchettas. Consequently, not all were V12s. Ferrari in this period raced with inline-fours and sixes, as well.

This 290 MM, the final of the four made, was built in early 1956 using an 860 Monza 3.4-liter 4-cylinder engine in a Tipo 520 chassis. (The “860” was for the 857cc-per-cylinder displacement.) A Scuderia Ferrari factory team car from the start, the new model entered its first race, the 1956 Mille Miglia, piloted by British driver Peter Collins, with motorsport photographer Louis Klemantaski as co-pilot. In addition, Klemantaski’s images provided a close-up look at the race from the driver’s perspective.

In the same race, Juan Manuel Fangio and Eugenio Castelotti also drove 290 MMs (chassis 0626 and 0616 respectively), and Luigi Musso drove an 860 Monza. Collins and Klemantaski took second behind Castelotti and ahead of Musso and Fangio. Olivier Gendenbien and Jacques Washier took fifth in a Ferrari 250 GT LWB Berlinetta. As a result, this gave the marque an incredible five-car sweep.

Chassis No. 1628 later finished fourth in the Targa Florio, piloted by Gendenbien and Hans Herrmann. The rest of the year saw a mix of success and disappointment in the hands of several other drivers. After an engine failure in the Swedish Grand Prix, the 290 MM received a new engine. It is a Tipo 136 3.5-liter DOHC V12 with six Weber carburetors, as used in the 290 Sport. Such upgrades were common at the time.

The Tipo 520 chassis was used for the 860 Monza, 290 Sport and the 290 MM, and so switching from the four-banger to the V12 required only minimal modifications.

With its new V12, chassis No. 1628 took third in the 1000 KM of Buenos Aires with a team of Castellotti, Collins and Alfonso de Portago. The 290S engine was then swapped out for a SOHC, 3-carburetor V12 for the 12 Hours of Sebring in 1957, and the car wore a slightly different nose, with polished aluminum air ducts for the brakes. Driven by Phil Hill and Wolfgang Von Trips, it retired on lap 106.

A Nose Job and More Wins

That marked the end of this 290 MM’s career as a factory team car. A collision in the Swedish Grand Prix banged up the front. As a result, it went back to the factory for a 250 Testa Rossa pontoon-style nose.

The 290 MM came to be owned by Ferrari’s U.S. distributor, Luigi Chinetti, for a time and was raced by Stirling Moss at Bahamas Speed Weeks in Nassau in 1957. Further, Moss handily won both events, leading from the start in the Memorial Trophy. At Watkins Glen, the 290 MM picked up a podium finish and 1st in class by future Le Mans winner Dan Gurney, and it was displayed at the Chicago Auto Show in January 1958.

After trading hands, the Ferrari 290 MM returned to Chinetti in 1969, but was stored until 1982. Chinetti had it partially restored and painted in his blue and white NART racing colors. After, he vintage raced it with his son, Luigi Chinetti, Jr.

Noted Ferrari collector Jon Shirley bought the 290 MM in 1998 and had it restored by Pete Lovely and Butch Dennison. In addition, the car became a show winner, including winning its class at the Pebble Beach Concours d’Elegance in 2001.

A subsequent owner had the 290 MM certified and restored by Ferrari Classiche. There, its correct engine, body and transmission were verified. The car had raced in different forms in its career, so the owner decided to restore it to the specifications and livery used at the 1957 Sebring race. This was its last as a Ferrari team car.