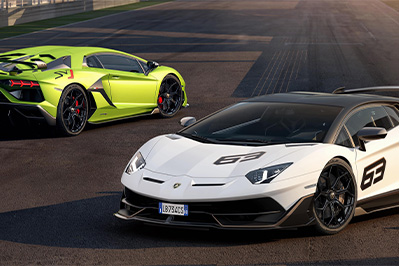 Lamborghini used the opportunity of “The Quail, A Motorsports Gathering” in Monterey, California in August to unveil its latest track-ready supercar, the Aventador SVJ. But before all the pomp, there was a critical circumstance in Germany. On the Nürburgring-Nordschleife to be precise. To earn its varsity letters, the Aventador SVJ lapped the famed “Green Hell” in 6:44.97, setting the record for a production car.

And yes, it is a true production car. Lamborghini will build 900 of the Aventador SVJ. In addition, another in “SVJ 63” livery to mark the Automobili Lamborghini’s birth year, 1963. The new models begin arriving in early 2019, starting at $517,770 – about $94k more than an Aventador S.

The new Aventador variant’s purpose is stated right in the name: “SV” is for Superveloce (super fast), and “J” is for “Jota,” the Spanish pronunciation for the letter J. Lamborghini has historically used “Jota” to denote its most track-capable models.

Compared to the Batmobile-ish Lamborghini Veneno built to commemorate the marque’s 50thanniversary in 2013 (just five built), the Aventador SVJ looks tame. Compared to everything else, it looks ready to melt the road and then inhale it through its gaping side air intakes.

From the looks of the bold “SVJ” graphics on the car’s haunches, you might think the design team had been admiring 1969-1971 American muscle cars. But when a car flaunts 770 horsepower, it can wear whatever graphics it wants.

Beneath the brashness, you’ll find a design language that has been one of the auto world’s most consistent. Look carefully, and you can see how the Aventador artfully combines the curviness of a Miura with the severe angles of a Countach.

Something in the Air

Of course, when building 200+ mph supercars, design is driven by aerodynamic science. You want the air rushing by to press the car to the road, not lift it. To that end, the Aventador SVJ debuts the carmaker’s Aerodinamica Lamborghini Attiva (ALA) 2.0, the second generation of a system that debuted on the Huracan Performante.

The ALA system employs computer-controlled electronic actuators to open and close flaps in the front splitter. Further, they conrolled the carbon fiber engine cover, managing airflow and downforce. Operation is controlled by Lamborghini Dinamica Veicolo Attiva 2.0 and its improved inertial sensors, which governs all of the car’s electrical systems in real time.

On the track, the system can operate the flaps to go from open (least air resistance) to closed (maximum downforce) in less than 500 milliseconds. What’s more, the air directed over the rear wing can be split left and right. This applys downforce only on the wheel that needs it.

Lamborghini has been building mid-engine V12 supercars for over a half-century. Nobody else can make that claim. The 6.5-liter V12 in the Aventador SVJ gets a solid 30-horsepower and 21 lb-ft torque boost over the Aventador S. This screaming naturally aspirated, barely contained monster produces 770 hp at 8,500 rpm and 530 pound-feet of torque at 6,750 rpm. Lamborghini doesn’t specify how it achieved those gains, only to say the engine has been “optimized.”

As in the Aventador S, the SVJ’s engine is teamed to Lamborghini’s Independent Shifting Rod single-clutch transmission. This claims faster shift times and less weight than a dual-clutch unit more commonly found in high-end sports cars.

Performance gains will be found on the road course, but not necessarily in pure acceleration. Lamborghini claims 0-100 km/h (0-62 mph) in 2.8 seconds for the SVJ versus 2.9 for the Aventador S. Where top speed for the S is claimed at 217 mph, the SVJ promises “more than” 217.

With greater use of carbon fiber in the body, Lamborghini claims 110-pound weight reduction over the Aventador S. Figure just under two tons for a U.S. model. (Lamborghini laughably claims a dry weight 3,362 pounds for the SVJ.)

The all-wheel drive torque split has been adjusted from 40:60 in the Aventador S to 37:63 in the SVJ, to further enhance agility. Suspension and steering have been tweaked, including recalibrated Magneto Rheological dampers, plus antiroll bars that are 50 percent stiffer.

With the Aventador SVJ, Lamborghini once again demonstrates how it resolutely carves its own path through the supercar ranks. If you miss out on the SVJ 63, feel free to paint “63” on the hood and doors of your SVJ.