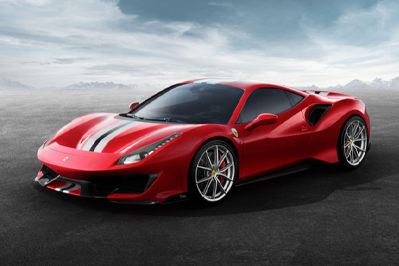 Ferrari loves a good tradition. In early March, the marque introduced the 488 Pista, the latest in a line of track-focused road cars that began with the 360 Challenge Stradale in 2003. Like that car, and the 430 Scuderia and 458 Speciale that followed, the 488 Pista is like a road-legal version of the current Ferrari Challenge racecar. The name is appropriate: Pista is Italian for track.

While it’s true that you could enjoy a Ferrari 488 GTB on track days with little more than a tire change, it was designed as a road car with actual comfort and convenience. Ferrari always leaves room to take its cars further for that purpose. The quick synopsis of the 488 Pista is that it’s lighter, more powerful, louder inside and out, and of course faster in every measure than a 488 GTB.

More Than a Feeling

Ferrari says the development goal for the 488 Pista was not simply to post astounding track performance stats. This it certainly will do. But also to replicate the feel and “emotion” of driving a Ferrari 488 Challenge and championship-winning 488 GTE racecars.

To create the 488 Pista, Ferrari lightened and tweaked the GTB’s 3.9-liter twin-turbo V8 to yield an additional 50 horses, now for 711 total. Vehicle weight has been cut by up to 200 pounds. The suspension is more track-tuned, new chassis electronics debut, and the front end is redesigned for greater downforce.

Ferrari says that over 50 percent of the 488 Pista engine’s components are new compared to the 488 GTB. The engine is 40 pounds lighter, thanks to such features as titanium connecting rods and carbon-fiber intake plenums. Internal friction is reduced, and the camshafts have different profiles than the GTB, and the pistons and cylinder heads are strengthened. The engine revs faster and sounds great doing it.

The engine air intakes have been moved from the flanks to the rear spoiler, as on the 488 Challenge. As a result, air reaching the intake plenums is nearly 60 degrees cooler than in the 488 GTB. The freer-flowing exhaust system, with manifolds made from Inconel, yields both louder sound and helps boost power. As in the 488 Challenge, the radiators are tilted rearward, rather than forward as in the 488 GTB, to ensure optimal cooling during track driving.

The dual-clutch 7-speed transmission reduces shifting times by 30ms when in RACE mode, and Ferrari says the driver will definitely feel those gear changes.

To reduce weight from the 488 GTB, Ferrari uses carbon fiber for the engine cover, the bumpers and the spoiler, and Lexan for the rear window. The lighter lithium-ion vehicle battery comes from the 488 Challenge. Optional carbon fiber wheels are needed to achieve the full 198-pound weight reduction claimed for the car.

The cockpit is trimmed in Alcantara and carbon fiber for a racecar look and feel. Ferrari pared down the interior to eliminate “superfluous elements,” such as the glovebox.

The front end of the Ferrari 488 Pista looks different from the GTB. However, this is not just for the sake of looking different. Its redesign, along with the S-Duct in the hood, rear spoiler and rear diffuser all contribute to higher aero efficiency and downforce compared to the 488 GTB.

Naturally, the 488 Pista inherits Ferrari’s latest chassis developments, with a goal to make the car’s higher handling potential accessible to all drivers, not just pros. Key to that claim is a new generation of the Side Slip Control System (SSC 6.0), an enhanced braking system and a new specific tire, the Michelin Sport Cup 2.

Another first for a Ferrari road car is the Ferrari Dynamic Enhancer (FDE). It is selectable via the manettino switch on the steering wheel, which helps the driver control oversteer. The technology is said to make performance on the limit easier to reach and control, even for non-expert drivers. On the hardware side, recalibrated SCM-E dampers and the 10-percent stiffer springs contribute to improved handling precision.

The 488 Pista is Waiting for You

Finally, Ferrari made the 488 Pista look like a racecar. It’s a beaut, featuring a two-tone livery that runs the entire length of the car, starting at the front bumper, dipping into the S-Duct. It continues all the way to the rear spoiler.

The price for the Ferrari 488 Pista has not been announced, but you’d better believe demand will be high.