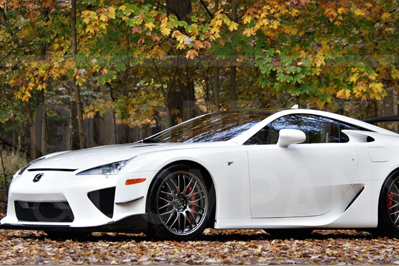 Lexus launched in 1989 with the tagline, “The relentless pursuit of perfection”. The brand was aiming to perfect comfort and quality in a luxury automobile, and that combination certainly brought much success. But to really take on the great premium marques of the world, Lexus needed to stun automotive connoisseurs. With the 2010-2012 LFA supercar, it did.

Toyota made just 500 of its Lexus LFA supercar, the final 50 equipped with the Nürburgring Package that further sharpened the LFA’s track prowess. If you missed your chance to get one new, the Gooding & Company Scottsdale auction is offering #498, with just 60 miles delivery miles. The pre-sale estimate is $900,000-$1.2m, or more than double its $522,328 MSRP when delivered.

By the time the Lexus LFA went into production in 2010, it had been teased, previewed and spy-photographed for five years. The deliberate rollout was needed, one could argue, to prepare the market for a car unlike anything Toyota’s young luxury brand had ever offered, a V10-powered, track-tuned supercar capable of 200 mph.

Lexus first showed a concept for the LFA at the 2005 North American International Auto Show in Detroit, by which time parent Toyota it had entered Formula 1. Although Toyota would not find much success in that venue, it was clear the company could develop the necessary technology. The production LFA was hand-built by a dedicated production team at Toyota’s Motomachi factory in Aichi, Japan.

Lexus had grabbed a sizeable chunk of the U.S. luxury market by offering more luxury than its German competitors, yet at a lower price. The LFA would do no such thing. Crafted from carbon fiber and aluminum, this was clearly a no-expense-spared effort to establish parity with the world’s greatest sports and GT cars from day one. The starting price for an LFA in the U.S. was $375,000 – even more than a Ferrari 599 GTB, for example.

Also, Lexus announced at the start that it would build 500 of its LFA supercars, and no more. This was not the launch of a sports car division, although it was intended to boost the brand’s line of “F” performance models. To discourage flipping, customers were required to lease their LFA’s for two years before being given the option to buy.

Sixty-five percent of the LFA’s structure was composed of carbon fiber reinforced plastic, while most of the rest was aluminum. At 3,559 pounds, the LFA weighed nearly 400 pounds less than a Ferrari 599 GTB.

The LFA engine was not based on anything in the Lexus fleet. However, it did draw from Toyota’s experience in Formula 1. The naturally aspirated, front-mounted 4.8-liter V10 developed 553 horsepower at a lofty 8,700 rpm, along with 354 lb-ft of torque at 6,800 rpm. The engine’s redline was 9,000 rpm, though the fuel cutoff occurred at 9,500 rpm. Dry sump lubrication maintained oil supply during high-speed maneuvers.

A six-speed, single-clutch automated sequential transmission, mounted in the rear for optimal weight distribution, was the only shifting choice offered. In Car & Driver’s hands, the LFA cracked off a 3.7-second 0–60 run and blew through the quarter-mile in 11.8 seconds at 124 mph. Brembo carbon ceramic brakes provided repeated fade-free stops. The two-seater cabin, trimmed in leather and carbon fiber, deftly blended comfort, luxury, and function.

Lexus entered the preproduction LFA in the 24-hour Nürburgring endurance race from 2008 to 2010. However, the LFA Nürburgring Package actually earned its name in September 2011. This was when a production model lapped the famed 14-mile track in in 7:14.64. The Nürburgring Package infused the LFA with an additional 10 hp, a faster transmission, more track-tuned suspension calibration and a carbon fiber aero package that increased downforce by 30 percent over the standard LFA.