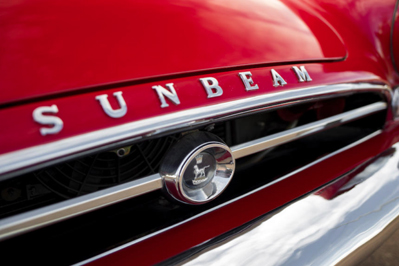 Even an on-screen role as James Bond’s ride in the first 007 film, 1962’s “Dr. No,” couldn’t make up for the Sunbeam Alpine’s lack of oomph compared to the quicker Triumph TR4. At the suggestion from its competition director in England, the West Coast distributor for Sunbeam’s parent company, Rootes Group, cooked up a much hotter version.

Carroll Shelby was contracted to apply the same kind of V8 transplant that had turned the AC Ace into the Cobra, and the Sunbeam Tiger was born. Over four years, 7,085 would be made, with most sold in the U.S. Many Tiger owners modified, raced and wrecked their cars, and so models left in stock or near-stock condition are relatively rare. Bonhams is offering such a car, a 1965 Tiger that remained in the hands of its original owner until 2014. The red Tiger has a pre-sale estimate of $90,000-$120,000 and will be offered without reserve.

Shelby’s operation spent months sorting out the problems of squeezing the compact Ford 260 cubic-inch-displacement V8 into an even more compact Alpine engine bay, while also trying to preserve the car’s handling. In the meantime, a hastily done transplant of the Ford V8 into the Alpine by racer Ken Miles had at least proved to Ian Garrad, head of the Rootes distributor and son of the company’s racing director, that the concept could work.

In addition, the Shelby’s development, called “Thunderbolt,” required body and chassis modifications to install the V8 with a Borg Warner T-10 4-speed transmission, add dual exhausts and replace the Alpine’s recirculating ball steering with a rack-and-pinion setup. The car was shipped to Rootes in England, where quick approval led to negotiation with Ford to supply engines. Because the conversion to V8 required more modifications than could be done on the Sunbeam assembly line, Rootes contracted Jensen to build the cars, using body shells from Pressed Steel. In a similar arrangement, Jensen had built the early P1800 sports coupe for Volvo.

Since Ford was using the Thunderbolt name for a limited run of Fairlane drag-race cars, Sunbeam reached into its own past and came up with “Tiger,” from a 1925 V12-powered land-speed record car. With a 2-barrel carburetor and dual exhausts, the Ford 260 V8 pumped out 164 horsepower and 258 lb-ft of torque and made the Tiger a predator among small sports cars. A zero-to-60 time of about 8 seconds and quarter-mile in 16 seconds were not far off a base-engine Corvette, which was about 500 pounds heavier and $500 pricier than the $3,500 Tiger.

Many Americans first saw a Sunbeam Tiger as Maxwell Smart’s car in the popular TV spy spoof series, “Get Smart”. However, Tigers did well in road racing, rallying and drag racing.

Faster, Faster and then Gone

In 1967, Sunbeam offered the Mk. II Tiger with a 200-hp Ford 289 V8. By then, Chrysler had acquired a controlling interest in Rootes Group. Chrysler was understandably averse to using a Ford engine, but its own small-block V8 would not fit in the Tiger. And so, the 1967 Tiger was the last, with just over 500 made.

Tale of the Bonhams Tiger

The Tiger offered by Bonhams was a European-delivery car, bought by Charles D. Parsons, who drove 3,175 miles in Europe before shipping the car home to Oklahoma. Under his ownership, the Tiger had been repainted its original Carnival Red once, and its seats were changed from Wedgewood Blue to black.

Since changing hands, the car has received much required maintenance and, in 2016, a new top and carpeting and. For greater reliability, Pertronix ignition and an aluminum radiator are a feature. With low miles and much documentation, this mostly original Tiger is certain to have strong interest.