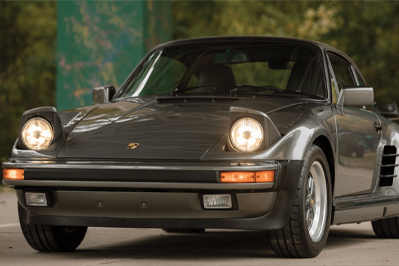 The Porsche 930, a.k.a. 911 Turbo, was not the first turbocharged production car. However, it undoubtedly was among the most significant in terms of impact when introduced in 1974 (1976 in the U.S.). If applying a modern-day marketing cliché, the 911 Turbo was “disruptive,”. It ignited a horsepower and performance race in the premium car realm.

Today, with essentially its entire model line using turbocharged engines, Porsche reserves the “Turbo” moniker on its top 911 models to distinguish those 540-607 horsepower models from the 911 Carrera and Carrera S models with merely 370 or 420 horsepower, respectively.

The Porsche 911 Turbo Flachbau is rooted, as are so many things related to the marque, in racing. The Porsche 935, introduced in 1977, was the factory’s racing version of the 911 Turbo offered to customers for racing in the World Championship of Makes, the IMSA GT Championship, and Germany’s DRM. Although the early 935s used the conventional 911 Turbo front end, Porsche, strictly following the racing rules, later relocated the headlights to the front spoiler and flattened out the hood to improve aerodynamics.

The mighty Porsche 935s won 123 races out of 370 entered. A 935 driven by Klaus Ludwig and American brothers Bill and Don Whittington, won the 24 Hours of Le Mans in 1979. Paul Newman, Dick Barbour, and Rolf Stommelen driving Barbour’s 935, took second, and another 935 took third.

Flat Nose for the People

Porsche tuners, including Ruf and Kremer, had been offering 935-look conversions for customer 911s. Then, Porsche decided to cash in on the trend in 1981. The company’s sonderwunsch (“special wishes”) office offered what was essentially a hand-built conversion that could add a whopping 60 percent to the car’s purchase price. The flat nose was not available for the U.S., however, because it couldn’t meet our lighting regulations.

Porsche remedied that with a productionized Flachbau for the 1987 model year, with option code M505 adding $23,244 to the car’s price. The Flat Nose option was essentially a full wide body conversion. Extended and boxed rocker panels led to wider rear quarter panels that accommodated larger wheels and tires, and the car wore a larger rear wing.

The M505 option design met U.S. lighting regulations, bringing retractable lights up to the required height. A Turbo Flachbau coupe could cost $70,000 or more, depending on options. Just 145 U.S.-specification 911 Turbo coupes got the option for 1988. The Flat Nose option was also available for the Turbo Cabriolet and Targa models, which had been introduced for 1987. A 911 Turbo so equipped became the defacto Porsche flagship model.

In other respects, the 911 Turbo Flachbau was stock, which in this case meant a 3.3-liter turbocharged flat six making 282 horsepower and 288 lb-ft of torque. The 911 Turbo still had a 4-speed manual transmission in 1988 and weighed just under 3,000 pounds. (The 1989 Turbo finally got a 5-speed.) The engine and performance specs were the same as for 1986 when the 911 Turbo had returned to the U.S. market after a six-year hiatus. Zero-to-60 took 4.6 seconds, according to Car & Driver’s test.

The 1988 Porsche 911 Turbo Flachbau on offer from RM Sotheby’s was special-ordered in Granite Green Metallic. It features color-matched wheel centers and a full leather interior in Gray Green. This special 911 Turbo was delivered through Pray Porsche-Audi in Greenwich, Connecticut, and the first owner held onto the car until 2000, when it had 23,447 miles. The Turbo passed through several owners after that, but they put on few miles.

Well optioned, this 911 Turbo Flachbau offers the comfort of power-adjustable seats with lumbar support, sunroof, alarm system and a Blaupunkt stereo cassette player. (You still have all your old mixtapes, right?). The leather-wrapped steering wheel is accented by a hand-painted Porsche crest, matching those on the center caps of the Fuchs alloy wheels. The car’s extensive documentation includes a Porsche Certificate of Authenticity.