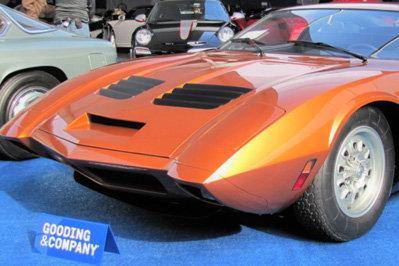 While half the country’s classics are squirreled away from salty winter roads, the other half head to Arizona for a week of auctions and shows in Scottsdale. This year, Gooding & Company’s Scottsdale Auction is raising the bar once more with a docket overflowing with high-end automobiles, including 17 cars whose low estimates exceed one million dollars. Among that rarefied bunch is a Bugatti Type 55, a Porsche 918 Spyder, and a handful of Mercedes 300 SLs.

Our Team of automotive experts will be watching the auction closely to help better lease these cars in the future. Here are some of their favorites.

Southeast Sales Manager Chris Warren finds the 2010 Lamborghini Murcielago at Lot 63 particularly striking. As the first car produced under VW ownership, the Murcielago assured the world that the Lamborghini spirit still held sway. Its looks recalled the Diablo and Countach, but with a sleeker and more modern finish. The mid-mounted, 6.5 liter V12 powered the rear wheels with over 600 horses and provided 0-60 times under 3.5 seconds.

Midwest Sales Manager Kyle Lane can’t look past the aggressive styling of the De Tomaso Pantera at Lot 42. The Pantera was born from a collaboration between De Tomaso and Ford, combining the former’s looks with the latter’s strength. In its day, it stood toe-to-toe with the likes of Ferrari and Lamborghini.  Lastly, this example is one of only 136 Panteras built to the GT5-S specification, which included flamboyant cosmetics and structural improvements.

Keith Neelans, Premier’s Northeast Sales Manager, is looking forward to the bidding on Lot 132‘s Iso Grifo. While much of America’s muscle was choking under emissions regulations, Iso decided to equip a Grifo with a seven-liter Chevy V8 capable of producing 400 bhp.  This example still sports its original engine and interior, and is one of only 17 shipped from the factory with a 5-speed gearbox.

Juan Garcia, Premier’s Sales Manager for the West Coast, is a fan of Lot 55‘s Jaguar D-Type. Following in the footsteps of the C-Type, the D-Type took the racing world by storm with wins at Le Mans and Sebring. This example is one of only 67 sold to consumers, offering a road car for the week and a race car for the weekend. These classic racers are finally getting their just deserts, regularly reaching 8-figures before the gavel sounds.

Premier’s Southwest Sales Manager, Michelle Yancey, has her eye on the 2004 Porsche Carrera GT. The Carrera GT was the first road car to make use of the following; a carbon fiber-reinforced plastic monocoque, technology adapted directly from Porsche race cars. Low curb weight and a 612 bhp V10 unbridled by electronic stability controls make for a pure and exciting driving experience. Offered at Lot 11, this Porsche in particular was owned for over a decade by actor Tim Allen.

The rarity and the looks of Lot 124‘s Lexus LFA have been getting a lot of attention at Premier Financial Services’ corporate headquarters. The LFA was Toyota’s first real supercar. It boasts a 4.8 liter V10 that could reach its 9000 rpm redline so quickly that conventional dials couldn’t keep up. As a cherry on top, this LFA is one of 50 equipped with the desirable Nürburgring Package. This package has increased horsepower, handling, and aerodynamics.

Regardless of where your favorites fall on the automotive spectrum, our team is happy to assist you with the acquisition of any high-end motor. But, even with Premier in your corner, be sure to consult your auction basics before bidding; the stakes are high at the Gooding & Company’s Scottsdale Auction.