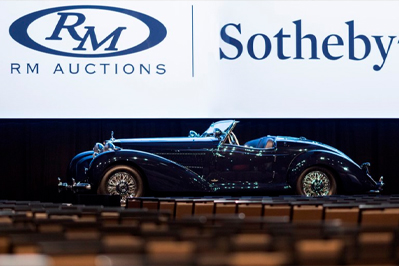 Come out of the cold for a week of sun-soaked auctions in Scottsdale, Arizona.  Of the thousands of collector cars sold, the couple hundred offered at the RM Sotheby’s Scottsdale auction are in a league of their own.  A slew of Ferraris, Lamborghinis, and Porsches will cross the block alongside unique classics like the Tucker 48. Now in it’s 19th year, the RM Sotheby’s Arizona auction continues to impress with its well-curated dockets.

Our Team of leasing experts are ready to assist you, should you choose to realize a dream and bid on one of these automobiles.  Here are a few of their favorites.

Premier’s Midwest Sales Manager, Kyle Lane, has his eye on the 2005 Ford GT at Lot 244. Built in honor of the legendary GT40 race car, the Ford GT played off its predecessor’s curves and quintessential stripes.  Priced near Ferrari and Lamborghini‘s entry-level offerings, the Ford GT easily outpaced its competition with an all-aluminum, supercharged V8. With the new Ford GT now in production, these classics may be in store for an increase in value.

For Southeast Sales Manager Chris Warren, it doesn’t get much better than 1967 Toyota 2000GT at Lot 131. The 2000GT was Toyota’s first real sports car, a 6-cylinder coupe built with Jaguar’s E-Type firmly in its sights.  Unfortunately, only 351 were built, a mere 62 of which landed in the United States. This particular example is one of those 62, finished in its original Bellatrix Yellow.

Northeast Sales Manager Keith Neelans is watching the 1957 Mercedes 300 SL Roadster at Lot 158. The Roadster provided a much-needed increase in usability for the vaunted 300 SL, that could be stifling on a hot day due to its “gullwing” doors.  A veteran of numerous vintage rallies, this motor’s prior owners made good use of the open top.  Having not been restored in a few years, this SL would make a stress-free companion for the Copperstate 1000.

Michelle Yancey, Premier’s Sales Manager for the Southwest loves Lot 140‘s Porsche 356 for its timeless design. Compared to the Speedster, the 356 Cabriolet was a creature of comfort, with a well-upholstered interior and adequate weather protection.  In spite of the increased weight, this little car’s 1500cc 4-cylinder provided more than enough pep for spirited driving.

West Coast Sales Manager Juan Garcia is watching the 1954 Jaguar D-Type at Lot 250.  As a Works car, it was built specifically for the Jaguar racing team and campaigned at the highest level of competition. This very D-Type was the main car driven by Stirling Moss at the 24 hours of Le Mans in 1954. With estimates ranging from twelve to fifteen million dollars, this D-Type will top the charts at the RM Sotheby’s Scottsdale auction.

Premier’s corporate headquarters in Woodbury, Connecticut, is looking forward to the bidding on Lot 153‘s Bugatti EB110. The EB110 lived up to the standards of its prewar ancestors with a quad-turbo V12 and advanced suspension.  It wasn’t too hard on the eyes either; the EB110’s coachwork was designed by Benedini and Gandini, complete with his distinctive scissor doors.

A Simple Lease from Premier Financial Services takes the stress out of bidding; we’ll worry about the logistics so you can get caught up in the excitement. Premier can help you with any high-end automobile, from leasing a little-known Bugatti to a universally-recognized 300 SL. But even with Premier in your corner, making the winning bid in Scottsdale can be difficult, so make sure to consult your auction basics before raising your paddle.